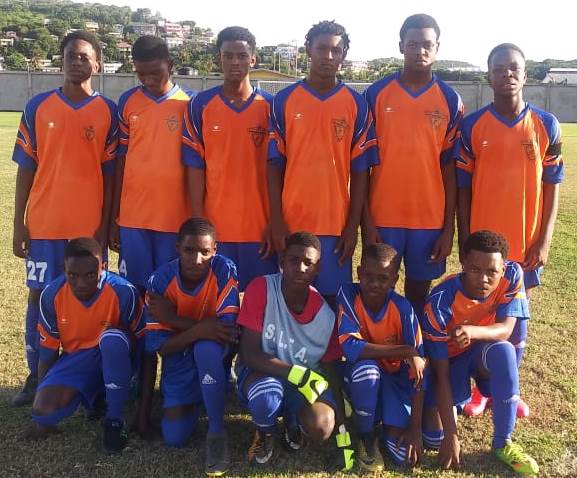 Seven games were played at the two venues with a total of 20 goals scored including two hat -tricks.

Results in the Western Zone played at the ALRPF – In Under 13 action, Monchy FC defeated 1987 All-Stars 6 – 1, with Zehneil Micheau scoring a hat trick in the 3rd, 11th and 39th minute, Nasi Alexander 13th, Mc Cain James own goal in the 47th and Russel Lastic in the 50th minute.

Kervin Biscette pulled one back for 1987 All-Stars in the 41st minute.

In the morning’s second game FC Pioneers defeated LA All Stars 4 – 0, with Curtrel Francois scoring a hat trick in the 36th 44th and 1 minute of added on time, while Dante Barthelmy scored the other in the 24th  minute.

Two matches were played in the evening in the Under 17 competition with Flow Lancers and B1 FC playing to a goalless draw.

In the other game played Flames and Boguis United played to an exciting 2 -2 draw. Scoring for Flames was Montel Carasco with a brace in the 10th and 25th minute, while Javer James 23rd and Thomius Jn. Baptiste in the 44th minute scored for Boguis United.

At the Phillip Marcellin Grounds in Vieux Fort three matches were played.

Uptown Rebels defeated DCYO 2 – 0 with a brace by D’ Jami Belasse in the 9th and 58th minute.

No. 12 Alpha Jn. Louis scored for OTR Strikers in the 14th minute.

In the final game, Platinum outplayed Shamballa 5 – 2. No.22 Kacey Baptiste scored a brace in the 4th and 29th minute, with the other goal scorers being No.7 Tristan Mariel 6th, No. 18 Kim Augustin 41st and No.20 Jesse Stephen in the 59th minute.

No.3 Obafami Poyotte and No.4 Liam Stephen scored for Shamballa in the 13th and 55th minute respectively.