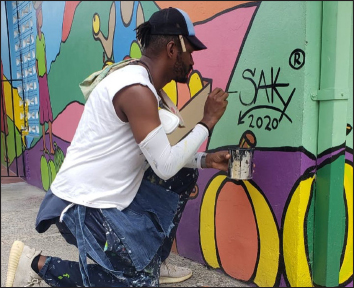 He’s had an affinity for art for as long as he could remember and art, undoubtedly, will always be a part of him. I interviewed the burgeoning artist earlier this week—it was our second interview. Naja and I crossed paths in 2017 at the National Youth Awards and I interviewed him shortly after.

Of course, he had lots to tell me as so much time had elapsed and I was eager to learn more about his projects.

“I (recently) embarked on this campaign called ‘The Outdoor Gallery’—kind of like putting art in public spaces. It initially started with myself and local musician Dupes and it just exploded. I was trying to showcase my work in galleries back in 2014 I think, and there was only The Inner Gallery in Bois d’Orange. They were not really having constant exhibitions for young artists—only for established artists, so we decided to put the artwork in outdoor spaces so people can see it,” he shared.

“We did a lot of schools initially and for this year we have done Independence murals, the Saint Lucia mural, the Marchand mural, an Earth Day Mural—it’s all over the place,” he added.

“(The Saint Lucia Mural) took about three months or more to complete. Invest Saint Lucia contacted me (as) they had seen my work and they wanted me to do something unique and kind of tell a story of Saint Lucia. (My team and I) looked at it, designed it and we literally worked throughout the lockdown and coronavirus and everything,” the artist explained.

The end result was breathtaking and persons fell in love with it instantly.

His painting of Cassius Glasgow touched the hearts of many persons who felt like he had truly captured who Cassius was.

“I was approached by the Ministry of Tourism which has the Creative Industries under its umbrella. They (wanted me to do) a design for the late coach to add to the Marchand wall. The feedback from the community was amazing. It’s like as soon as I started doing it, I think it didn’t have a face or anything (they just saw the ‘tam’) and everybody was like ‘that’s Cassius!’ As soon as they saw his locs, everybody knew instantly that it was him and it was only positive vibes the whole time. It’s one of these murals (where) I was like wow, this is actually touching people,” he said.

It’s his favourite piece to date.

The Castries Market mural also received lots of praise and that came as no surprise. Persons welcomed it wholeheartedly as the market was in dire need of a facelift.

“I’m sure you’re familiar with the Haitian market artwork—I pulled some ideas from that. I also did a lot of research on pictures of the Castries Market; we tried to keep it simple, bright and colourful,” the art lover revealed.

He’s worked on a number of other murals (too many to count) including four Independence pieces.

According to Naja, “a project I really look forward to getting done is painting the facades of the CDC buildings. I’m going to propose something and I hope to get other artists in on it; all I can see is a giant canvas.”

A Visual Arts teacher at the Saint Lucia Sports Academy, and a graduate of Grambling State University, the artist who hails from Saltibus says what he loves most about what he does is “the fact that artists have the ability to make people think and question things.”

He walked me through his childhood years which was absolutely golden.

“It was the most amazing experience: fresh air, lush green vegetation, rivers and waterfalls. I think that kind of fueled my love for landscapes, because in my actual oil paintings I do a lot of landscape paintings and it’s mainly forest scenes,” he said.

Some know him as Naja and others simply call him ‘Saki’. Wondering where he got the name from?

“My full name is Naja Misaki Simeon. (My family) calls me Misaki and Misaki for short became ‘Saki’. When I decided to brand it, kind of like when I was in secondary school, tagging up all the walls at Choiseul Secondary (I hope the principal doesn’t hear that), I didn’t want it to be Saki like rice wine, I wanted it to be more unique, so it became ‘Sakey’ instead. From there to university, the branding became more pronounced. (When I came) back to Saint Lucia it was just like, well, that’s what it is. I kind of embodied and empowered it a bit,” he explained.

He continued: “Sakey Productions does anything from book illustrations, portraits, logos, murals, oil paintings, art classes, wearable art, all that stuff. I’ve acted in a few movies as well and they just called me up to be in another little short film so anything creative Sakey Productions is part of it.”

The artist encourages persons to blaze their own trail.

“During my studies one of my favourite artists was Jean Michelle Basquiat. His story is an incredible story and it just made me realize that sometimes you just have to do what you want to do, instead of doing what your parents want you to do, or what the world wants you to do. You have to express yourself, blaze your own trail and do it. Even if you die at 27, you know the world remembers you for who you were and not who other people wanted you to be,” he said to me.