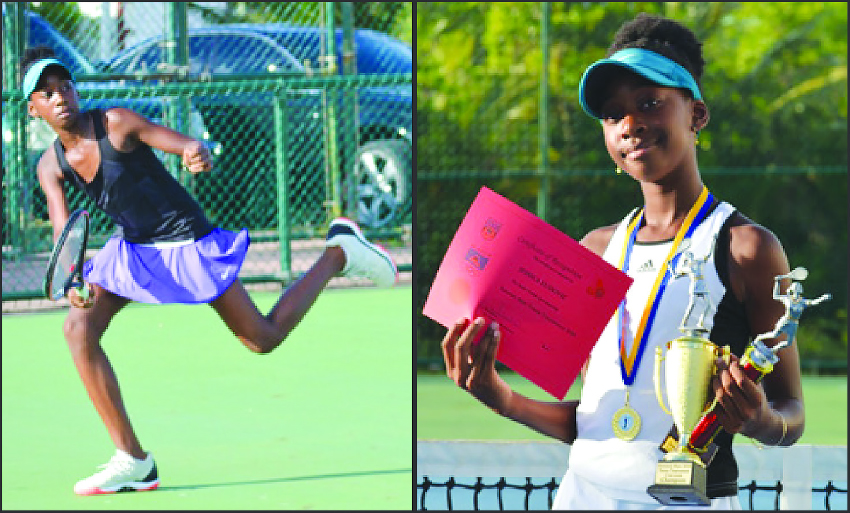 Saint Lucia over the years has seen quite a few outstanding women Tennis players who have made their presence known to the elite, and in the process set the stage for future players.

For the last three years a wave of new players announced themselves to the world of tennis, the likes of Alysa Elliott; Jorja Mederick, Iyana Paul; Natasha Charles; Amara Jn Marie and Jaelyn Henry. Jaelyn who is still under 12 years old is already creating problems on centre court; it means that there is a clear indication the well is overflowing with lots of potential.

The dust has settled over the Saint Lucia Tennis Association (SLTA) Summer Slam Classic which took place at the National Tennis Centre (NTC) However during the week’s long tournament, the few tennis fans who came in for the showpiece saw some pretty standout moments.

Despite all the Covid -19 protocols in place, Sportlight was fortunate to be at the NTC to take in a couple of matches, but the one that really caught my attention was the Under 14 girls singles between Jessica Eudovic and Iyana Paul on court No.1, and based on what I saw, I can safely say that a new tennis star is born.

At the time I did not know who Jessica was, it was my first time seeing her in action, but when I asked about her I was told that she is a Saint Lucian who resides in the USA.

The time I spent watching the encounter between Fair Helen’s two young princesses was well worth it. Jessica showed all the attributes, physically and mentally to be a world champion, while Paul in order to advance played a game of her life to put her opponent away.

The difference during that encounter was the level of coaching and discipline combined with deep concentration and consistency Jessica may have received in the USA which certainly made her the better player on court.

Her poise and maturity, combined with her superb forehand and volleying skills and movement on court beyond her years won favour with the few tennis fans that either came in to take in the action or came to pick up their children from earlier games played.

So who exactly is this teenage tennis player known as Jessica Eudovic?

She is the granddaughter and niece of renowned Saint Lucian and Caribbean sculptors, Vincent Joseph Eudovic (grandfather) and Jallim Eudovic (uncle) of Eudovic Arts Studio in Goodlands. At present she does not have a ranking, but started playing tennis two months before her 9th Birthday (2016).

Jessica Alexandra Eudovic was born July 28th, 2007 to Giscard and Simone Eudovic. She currently attends The Spence All-Girl’s school in the USA and is in the 7th Grade.

She has one brother, Benjamin Eudovic and according to Jessica, he does not play tennis, but plays American football and participates in athletics and swimming.

Jessica has a special gift and there is no question about it, tennis is her favorite sport and through tennis she said, “I have learned how to think quickly, be disciplined and mentally tough; because tennis is a lifelong sport, it opens up a lot of paths for me”

The aspiring young tennis player was very excited to have won the girls Under 14 and 16 singles championships. While in Saint Lucia, during the month of August, Jessica took the opportunity for some much needed play time on court when she participated in the Saint Lucia Tennis Association (SLTA) annual Summer Slam Classic.  In the process she became the hot ticket on court as she went on to capture the Under 14s and 16s singles girls titles defeating Lotoya Murray and Iyana Paul; she then teamed up with Iyana Paul in the Under 16 doubles to defeat Lindy Amedee and Amelia Duval.

Jessica’s parents Giscard and Simone were seen cheering under an umbrella from the bleachers amid the midafternoon heat, their only form of shelter as they watched their daughter’s big moments.

“It was a nice accomplishment for me to win three titles in the same tournament”. Jessica disclosed.

On the quartet mentioned above, Jessica’s style of play is similar if you’re a tennis fan and have seen the four players she is referring to. She plays an aggressive brand of first-strike tennis which keeps opponents on their heels. Her serve is already dominant, which sets her up to rip monstrous forehands for her size (physical structure) it should bring plenty of future wins on either hard and grass courts whenever she competes in the years ahead, she is definitely going to be a big name by the time she turns 18.

Coaching wise while in the USA, she is under the watchful eyes of Richard Bowie of Perform Tennis Academy and in Saint Lucia, former national tennis player now coach of Blanchard’s Tennis Academy, Ron Blanchard oversees her training.

Parents support, she said, “My parents are my biggest supporters and cheer leaders and they always come to cheer me on”.

In terms of the best advice given to her by her mother, Jessica said, “Always play your game”

There are parents who do put that added pressure on their children to perform: when asked whether she feels pressured by her parents in anyway, she said,  “I do not feel pressured by my parents because I put enough pressure on myself to have fun and make sure I play the right way and they recognize that”. she noted.

At present Jessica is not focusing on her ranking, she disclosed, “My main goal is to keep improving my tactics, techniques, mental toughness, and giving 110% effort each time I hit the court”.

In terms of crowd/tennis fans coming to take in the action,  she said, “I do not focus on the size of the crowd but more on staying focused and zone into my game; I do feel nervous, but once the warmth on the court passes I am in my zone and the nervousness goes away”.