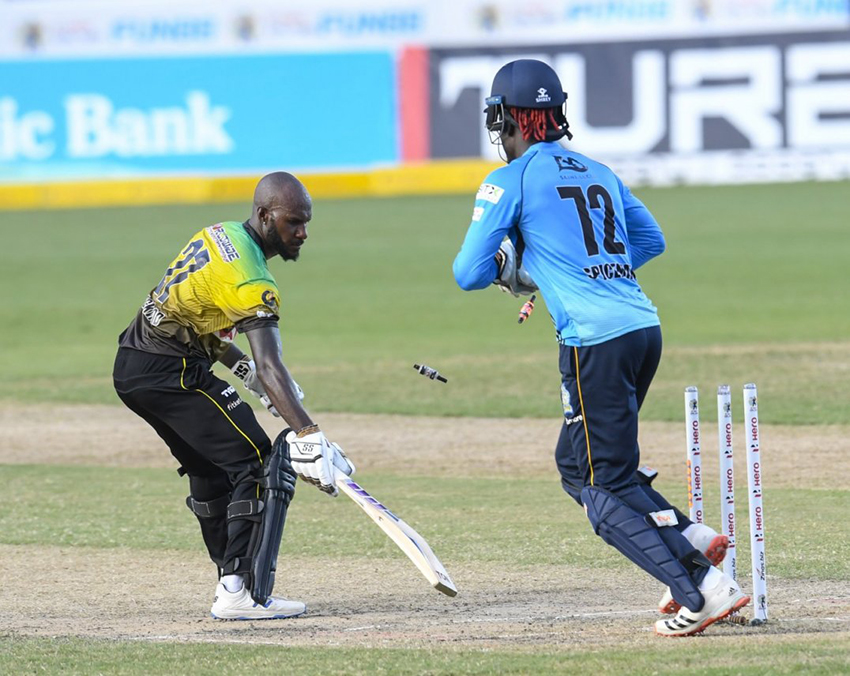 Cricket action resumes on Tuesday 9th September 2020 in the Hero Caribbean Premiere League  (HCPL)T20 tournament when the Saint Lucia Zouks will take on the Guyana Amazon Warriors in semifinal No.2 at the Brian Lara Cricket Academy from 5.30 p.m.  In semifinal No.1, Trinidad Knight Riders play Jamaica Tallawahs from 10.00 a.m. at the same venue.

Meanwhile, a remarkable collapse of 9 for 45 in 44 balls, including three sets of two wickets in two balls, saw the Jamaica Tallawahs collapse from 84 for 0 and fall short of a modest target against a canny St. Lucia Zouks side who are making a habit of defending low totals in HCPL 2020.

Fidel Edwards’s first over was fiery, and while Rakheem Cornwall drove for four he should have fallen trying to pull, but a stiff-looking Andre Russell parried the catch for another four. Mark Deyal started with a straight four off Veerasammy Permaul, but Edwards’s second over went for just four, and while Deyal pulled Mujeeb Ur Rahman for four the Afghan dismissed him with a googly.

Permaul’s second went for just one, and while Cornwall dispatched Mujeeb over long-off for the game’s first Hero Maximum, the rest of the over went for only three, and at the end of the Powerplay the Zouks were 35/1 with both Cornwall and Andre Fletcher under a run a ball.

Fletcher tried to attack Carlos Brathwaite but was superbly caught by Jermaine Blackwood. Cornwall hooked a second Hero Maximum and launched Sandeep Lamichhane for a third, but the Nepalese bowled him next ball with a googly. Brathwaite went for just five, and Permaul dismissed Mohammad Nabi who swept straight to his countryman Mujeeb. At halfway, the Zouks were 66 for 4.

Lamichhane bemused Najibullah Zadran to go for just one. Roston Chase thus had to attack Permaul’s final over, and hit a straight Hero Maximum followed by a paddle-swept four. Lamichhane bowled a maiden, beating Chase on both edges, and Mujeeb’s third over went boundary-less to leave the Zouks 88 for 4 after 14.

Lamichhane had bowled 11 dot balls in a row, but Najibullah broke the shackles with his reverse sweeps – if the first, a four, was fortunate, the second, a Hero Maximum, was majestic. Najibullah then dispatched Brathwaite over long-on then midwicket for consecutive Hero Maximums, bringing up a 50 partnership.

Edwards targeted Najibullah with the short ball, going for just four, and while sub fielder Nkrumah Bonner reprieved Najibullah by dropping a simple chance off Mujeeb, the Tallawahs spinner got his countryman soon after as Najibullah sliced to Brathwaite at point. The Zouks reached 125 for 5 off 18.

Javelle Glenn fell to a searing Edwards yorker, but Daren Sammy was able to use the pace to slice for four. Chase had become subdued and ended not out at under a run a ball.

Neither Blackwood nor Glenn Phillips started fluently – extras took up most of the first over, Nabi went for just two, and the first boundary of the innings was an under-edge. The Tallawahs were a scratchy 17 for 0 after three overs.

Blackwood flicked Nabi through square leg for four, and Phillips steered the Afghan for a four of his own. Kesrick Williams’ first over went for only three, but Deyal started with a full toss, swatted by Phillips for four, and followed it with five wides. Thus the Tallawahs reached 46 for 0 off the Powerplay.

Phillips picked the gap at midwicket to pull Zahir Khan’s first ball for four, but Blackwood was eating up deliveries, and while the Tallawahs reached 55 for 0 after eight overs, he was going at under four an over.

A misfield at third man gifted Phillips a four to end a good over from Williams. Blackwood continued to lack timing, but he and Phillips at least did not allow a dot ball off Zahir’s 10th. At drinks, the Tallawahs were 72 for 0.

Phillips thumped Zahir for the innings’ first Hero Maximum, but the Afghan ripped one through the gate to bowl the Kiwi. Sammy went to his other wrist-spinner Glenn, and the move proved fruitful as Blackwood under-edged to Fletcher. The Tallawahs suddenly found themselves needing 60 at over eight an over.

Tallawahs captain Rovman Powell fell third ball to Zahir thanks to a brilliant slip catch by Sammy, and panic set in when Russell fell first ball, also caught by the captain at slip. Nicholas Kirton survived the hat-trick ball, but Zahir had changed the complexion of the game, and after 14 overs the Tallawahs were 93/4 and needed close to nine an over without Russell.

Walton’s difficult season continued as a good throw from Najibullah ran him out, and the Tallawahs now needing 43 off the last four overs. While Glenn dropped Brathwaite off his own bowling, he trapped him LBW next ball and then bowled Permaul to give himself a second chance at a hat-trick. Mujeeb survived, but the Tallawahs had dug themselves into a huge hole and now needed 13 an over.

Kirton launched Nabi over long-on for six then drove for four, but the Tallawahs still needed 24 off the last two overs. While Kirton smashed a full toss for a Hero Maximum, Williams calmed any nerves with a slower ball that bowled Kirton, and closed his spell with a second wicket as Lamichhane picked out Nabi at long-on.

Chase had 17 to defend off the last over to Mujeeb and Edwards, who were never likely to get close. The Tallawahs go into a semi-final against the Trinbago Knight Riders on a losing streak and with questions to answer, but even with the Guyana Amazon Warriors’ pedigree the well-led Zouks are not to be taken lightly.