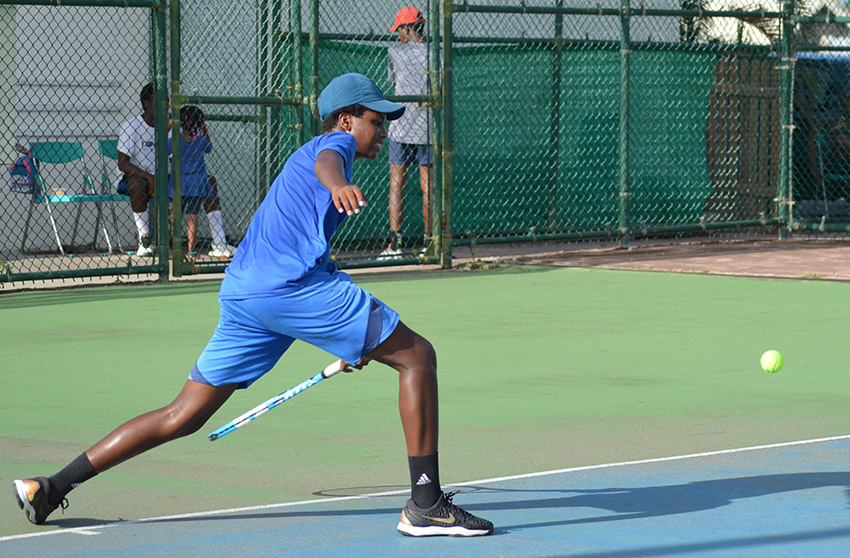 Tennis action continued on (Wednesday 12th August 2020/Day 3) of the annual Summer Slam Tennis Classic. The event is organized by the Saint Lucia Tennis Association (SLTA) and is currently being played at the National Tennis Centre (NTC) in Beausejour, Gros Islet.

Like previous tennis tournaments played at the NTC, the SLTA is inviting sports enthusiasts/ members of the public to come in and support the showpiece. (Admission – is absolutely free)

Meanwhile, the NTC came to life on Day 1 (Monday 10th August 2020) with exciting first round matches from all top seeds in the draw.

On court, Amia Jn Marie breezed through Samuella Bertrand 6-0, Jaelyn Henry made light work of Jordyn Bishamber defeating her 6 – 1, Sanjay Lake got the best of Mathew George 6-3 and Dante Joseph was also victorious over Reggie weeks 6 -3.

In the second round of matches saw some outstanding performances from the under 12s and under 14s. Jessica Eudovic defeated Amelia Rosemond in straight sets 4 – 0, 4 – 1; Iyana Paul from the Blanchard’s Tennis Academy former finalist in the Independence Tennis Tournament and currently the Junior Sports Woman for the year in Tennis made light work of Lindy Amedee defeating her in straight sets 4 – 0, 4 – 0.

The boys Under 10s went back on court in the afternoon, in their second match for the day, Reggie Weeks succumbing to Sanjay Lake 6 – 0; Jordyn Bishamber defeated Samuella Bertrand 6 -3, Mathew George also had a great set against Dante Joseph winning  6 – 0; while Aiden Rosemond defeated Denney Estava 6 – 4.

Iyana Paul defeated Jessica Eudovic in a very competitive 3 setter,  Paul  nosed ahead winning the first set 4 – 2, Eudovic was very persistent and determined as she had to save two match points in the second set going on to win it 5 – 3.  Paul then swiftly ended the match winning the third set 4 – 0.

Alysa Elliott champion of the National Independence Tournament Under 14s, Under 16s and women’s open continued on her winning streak first taking on Jorja Mederick defeating her in straight sets 4 – 0, 4 – 1. She then quickly dealt with Latoya Murray defeating her with the same score 4 – 1, 4 – 0.

The match of the day was between Nathan Elliott ranked No. 6 and Aaron Gerald ranked No. 3 in the Under 16 category, this encounter was the longest 3 setter recorded to date at the NTC as the two energetic players spent nearly 3 hours on court battling it out in the mid-day sun. Elliott was the eventual winner after losing the first set 2 – 4; he came back and won the second 4 – 2 and the third with the same margin of victory 4 – 2.

On Tuesday,  (Day 2) still in its round robin phase with the participants trying to secure their spots in the main draws of the different categories.

In the girls Under 12s Jaelyn Henry has secured her spot in the main draw and at the top of group 1 as she defeated Amara Jn Marie No.1 ranked player in straight sets 4-2, 4-1. This is Henry’s first time playing in this category and she has outdone all her opponents thus far as she vies for the title.  Henry also defeated Samuella Bertrand 6-0 in the girls green ball Under 10 category.

In other Under 12 matches, Amia Jn Marie advanced to the main draw with ease after she defeated Jordyn Bishamber 5-3, 4-1. Nathanael Charles defeated Ishan Patra in straight sets 4-0, 4-0; Charles is at the top of his group as he advances to the main draw.

Sanjay Lake took on Soren Clairmonte defeating Clairmonte in a very close match with the players splitting sets; Claimonte swiftly won the first set 4 – 0 without giving Lake an opportunity to win a game.

In the second set Lake was able to pull it together winning 4-2, Lake being the adept player that he is was able to win the match in the super tie break 10-5. Lake also defeated Dante Joseph 6-1 in the Boys Green Ball Under 10 category.

The second round of matches played was the Under 14s boys and girls, Peter Murray defeated K-Zahn Elwin in straight sets 4-2, 5-4, Elwin was very competitive and challenged Murray the entire match.

Shahealer Jules was able to secure her sport in the main draw after losing to Latoya Murray earlier in the tournament Jules knew she had to win against Eridania McVane to advance. Jules won the first set quickly 4-0, McVane was able to make her come back and win the second set 4-2. Jules won the third set 4-2 and was declared winner by chair umpire Ricardo Francois.

In other Under 14s matches played Jessica Eudovic defeated Amara Jn Marie placing her at the top of group, the final score was 4-1, 4-1.  Latoya Murray defeated Shahealer Jules in straight sets 4-0, 4-1.

The older players in the Under 16 and Under 18 category took to the courts in the afternoon with No.1 ranked player in the Under 18 boys Joey Angeloni defeated Petterson George in straight sets 4-2, 4-2. Angeloni also went on to defeat Jivan Joseph 4-0, 4-0. Arden Rosemond defeated Aaron Gerald in straight sets 4-2, 5-3. Rosemond also went on to defeat Nathan Elliott in three sets all with the same scores 4-1, 1-4, 4-1.

In the Under 16 category Jorja Mederick defeated Latoya Murray 4-0, 4-0, Mederick although losing to Alysa Elliott earlier this week was still able to secure her main draw spot after defeating Emma Duval later on.  The final score versus Duval was 4-0, 4-0. Iyana Paul defeated Amelia Rosemond making her number one in her RR group; into the semi-final she goes to face Mederick for a spot in the final. In other 16s matches Amelia Rosemond defeated Lindy Amedee in straight sets 4-1, 4-1.