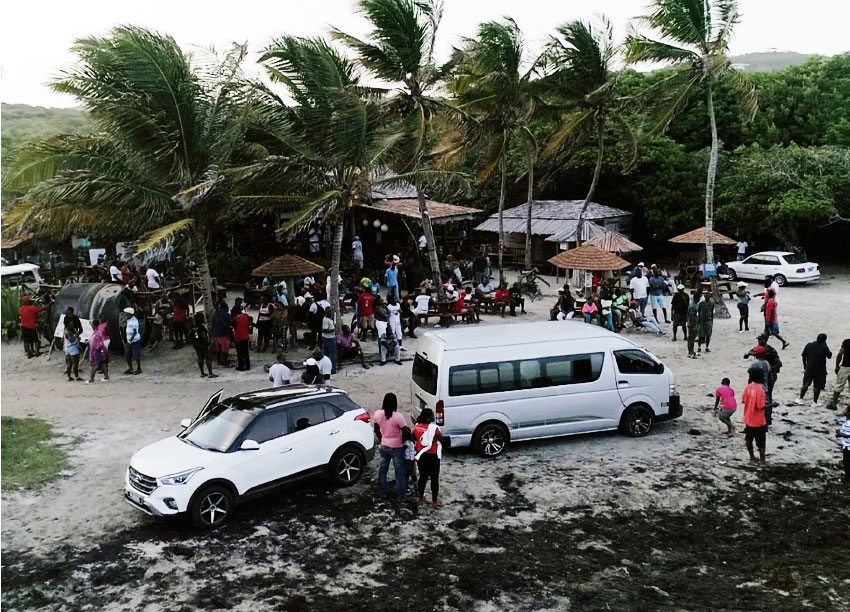 It was sure to come to a climax, all the loud cries made when Cabot Saint Lucia Inc. first announced its intention to acquire that portion of land in Cap Estate that goes all the way down to where the business enterprise of Marjorie Lambert reigns supreme on Cas en Bas Beach.

Now elevated to the status of a jewel in the crown of small/micro, locally owned tourism entities, Marjorie Lambert’s restaurant and bar has had run-ins with authorities before. However, this time around, word that the Cabot development would swallow up her business which has been operating for over 20 years began to spread.

And spread it did, to the point where last Sunday, a reasonable crowd gathered at her place at Cas en Bas, calling on the authorities not to remove her but rather incorporate her business in the overall plans for the development undertaken by Cabot in which the National Insurance Corporation has a loan investment of EC$27. 5 million.

Lambert has been steadfast in her refusal to move from where she’s at and Saint Lucians have been vocal in support of her stance, evidence of which was manifested last Sunday, even though the protest prematurely ended when police intervened by calling for the music to stop for lack of a permit.

Government has not been idle against the media backlash coming its way offering more information about the Cabot development than it previously had. For instance, Herod Stanislas, Physical Planning Minister and Guy Joseph, Infrastructure Minister this week admitted that the Cabinet of Ministers did extend the leases Cabot had on the lands earmarked for development to 75 more years, including the Queen’s Chain.

Stanislas further claimed that government would not infringe on the rights of Lambert nor prevent her from earning a living which she has been doing for more than two decades in the area where she is at.

“There will be discussions with Marjorie (Lambert), the developers, the parliamentary representative for the area and the Department of Physical Planning on the way forward. We are going to do everything within our power to work with the developer, with Ms Marjorie and all stakeholders who have establishments on the beach at Cas en Bas,” Stanislas said.

Said Minister Joseph, “In the case of Marjorie (Lambert), what I know from the Cabinet standpoint is that there have been negotiations and discussions and a few options have been put on the table. Among the options that have been considered is the option to relocate to the further end of the beach, and some compensation given, and proper access created, also additional facilities like toilets and other things that are necessary,” Joseph said.

Unclear though are the roles Cabot Saint Lucia Inc. and the Government of Saint Lucia will play in that process.

“We don’t believe that if somebody has been operating somewhere and operating a business that you can just displace the person without any due consideration,” Joseph said.

Stanislas said public access to all the beaches in the area will be available, further, Cabot Saint Lucia has submitted a master plan to the Ministry of Physical Planning which is processing that plan in stages.

The Marjorie Lambert issue is not the only one that has angered Saint Lucians since heavy equipment begun re-arranging the land’s topography. The archaeological and historical nature of the land earmarked for development came to the forefront immediately after large tracts were cleared. Environmentalists raised their voices against the destruction to the artifacts and other items of historical and archaeological value the plowing of the land and the adjoining Queen’s Chain would wrought.

The Saint Lucia National Trust, Archaeological and Historical Society and the “Lavoutte Links” concerned citizens group banded together to seek dialogue with the developer on how to preserve the artifacts being dug up and other heritage assets.

The group believes that the unique and sensitive biodiversity of the area, including Cactus Valley, which has significant populations of a wide variety of cacti, is under threat from the massive clearance activities already undertaken.

There are also concerns that the (little) known Amerindian burial site within the property will be destroyed although the developer has given the assurance that this area will be respected. The average Saint Lucian came into the picture when the National Insurance Corporation approved a loan to Cabot claiming that the loan is 100 percent secured and structured in a manner that would cause the Corporation no exposure during the loan’s currency. The loan has a maximum repayment period of 12 years.

A statement from Cabot Saint Lucia found on the Facebook page of the United Workers Party reads as follows:

“Over the last few months, there has been inaccurate information circulating about the Cabot Saint Lucia development taking place at Cap Estate. While the development is on private lands (which sat idle for more than a decade), Cabot wants to make clear their intention to be a partner in the community. Cabot has no intention of denying Saint Lucian nationals their rights and, while they understand that there will always be a small few opposed to any development, they are committed to showcasing Saint Lucia on the world stage in a way that the majority of Saint Lucians will be proud of.

For this reason, Cabot wishes to correct these inaccuracies and state its position on the issues of concern to Saint Lucians.

The NIC provided an interest-bearing loan at market rates to Cabot, which is secured by the land. Therefore, if Cabot were ever to default, the land would belong to the NIC (as opposed to staying idle in the hands of a foreign bank or receiver). However, with the success of the project, the NIC will not only be repaid for the loan with interest but they will continue to benefit from future employer/employee contributions.

From the outset of this project, Cabot has been – and continues to be – committed to providing beach access. In addition, Cabot has also made a commitment to enhance Cas en Bas with improved accessibility and new facilities for public use, once the relevant government permissions have been granted to do so. The only access to the site that has been blocked was the result of a government request to stop the illegal entry of persons from Martinique during the COVID lockdown, and that which would safeguard the safety of citizens as construction of the golf course progresses.

Cabot continues to work with the Government of Saint Lucia and the existing businesses in the proposed development area to find workable solutions to preserving these businesses and jobs.

Cabot has already agreed to adhere to the protocols established by Invest Saint Lucia for a similar development project, and it stands ready to enter into an agreement with the Government of Saint Lucia or its assigns on this.”

But environmentalists are not moved by what Cabot Saint Lucia is saying pointing to the master plan for the area earmarked for development. That plans shows an 18-hole golf course, a resort, spa, beach club, duplex villas and development lots on 360 acres of land. On the plan, the main entrance to the development is through Finch Road in Cap Estate while the existing beach access to Cas en Bas appears to be a service/utility entrance.

The plan also shows that the Cas en Bas beach is earmarked for beach villas with beach villa number four being where Lambert’s bar is currently located and that there is a proposed beach club on top of the Amerindian Archaeological Site where research (which most St Lucians are unaware of) was done in 2009 by the University of Leiden (Netherlands).

With respect to the popular kite surfing area, on the master plan it appears earmarked for beach villa number two.

While the master plan shows public access to the beaches will be restricted, government ministers have stated that public access will be open, accessible, and unrestricted.

Is this a matter of wait and see?