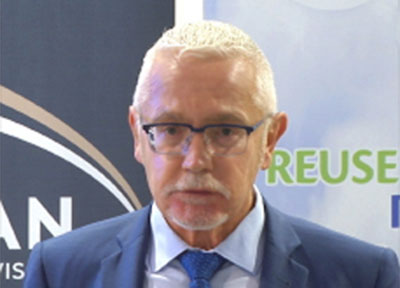 Unite Caribbean, the implementation partner for the RePLAST-OECS Pilot Plastic Recycling Project, has announced the imminent roll out of the incentivized collection system that will give impetus to the establishment of sustainable plastic recycling systems in Saint Lucia.

On Thursday August 6, Unite Caribbean gathered an august group of international partners, state agencies, non-governmental organisations and private sector companies to preview the system. Representing the lead partners were Minister of Physical Planning, Herod Stanislas for the Government of Saint Lucia, H.E Philippe Ardanaz, Ambassador of the Republic of France, and OECS Director General Dr Didacus Jules. The project is primarily funded by the Republic of France as a co-operation project.

Among the highlights was the presentation of key findings from a study by Accela Marketing on levels of buy-in from the market for the circular plastics economy model, and what this implies for private sector and consumer participation. These findings also provided the basis for the design of the new incentivization system. Stakeholders also previewed two key touchpoints of the incentivized collection system, namely the supporting online portal and a private sector-supported rewards card.

In his welcome remarks, Thomas Chollet, Cofounder and Managing Director of UNITE Caribbean noted that the sustainability and potential for replicability of the RePLAST-OECS Project lies in its design as “an operational and results-oriented project, with real life implementation, on-the-ground action, and communities and population involvement; and one which will create a real impact on plastic pollution in Saint Lucia”.

Minister of Physical Planning Herod Stanislas delivered the feature address, during which he reiterated government’s pledge of continued support to the implementation agency and its partners. “Saint Lucia has been afforded the opportunity to establish a system for the collection and export of plastics and will capture waste for diversion well beyond the RePLAST-OECS initiative. As the Deglos Landfill nears its capacity, any system which causes a diversion of plastics and any other valuable waste streams increases its life thereby deferring the need to fund another landfill to the tune of millions of dollars”, the Minister said, further noting that with successful implementation, the RePLAST model “could potentially transform solid waste management in Saint Lucia”.

Upon completion of the pilot project, management of the recycling model will fall under the aegis of the Saint Lucia Solid Waste Management Authority in collaboration with the Business Community.

Along with a RePLAST rewards card, an initial six island wide collection points will be commissioned in September and October with more to follow when hotels and schools resume normal operations. This was announced by RePLAST OECS Project Manager Shanta King.

In a circular economy model, recycling keeps the value of plastics in the economy, while removing the element of pollution from the natural environment. Incentivization is an ideal mechanism to nurture a sustainable recycling culture. To date, the project has secured committed partnership support from major businesses such as Massy Stores, Windward and Leeward Brewery, Digicel, Flow and organisations such as the Saint Lucia Hotel and Tourism Association and the St. Lucia Manufacturers Association.