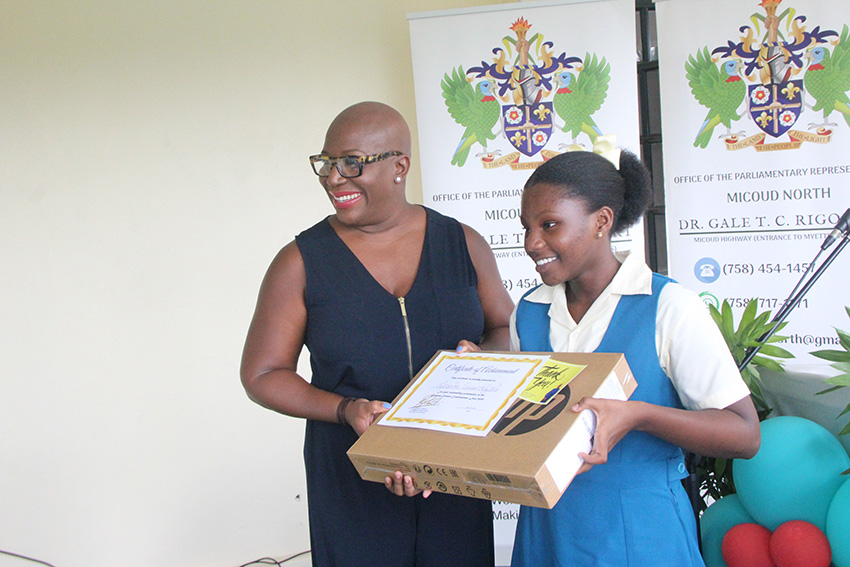 Nyhandra Louison-Augustin a resident of the beautiful and tranquil community of Mon Repos in Micoud North is one of the many students who was successful at the recent Common Entrance Exams held here in June. Held under trying circumstances due to the threat of Covid-19, the 2020 cohort of students sitting the exams have been hailed as resilient and extraordinary by Ministry of Education officials.

Nyhandra sat the CE exams as a student of the Mon Repos/Patience Combined School and was one of the top performers from the school and the constituency of Micoud North.

Her score – 90.12 and In September 2020 she will begin her studies at the St. Joseph’s Convent, something she says she is looking forward to with much excitement and anticipation.

Not only has Nyhandra been celebrated by her community, her teachers, principal family, district rep and peers for her success, but she is being singled out or her tenacity and gift of sharing and helping. These traits were commended by the host of a recent ceremony to honour the top CE students of Micoud North. The ceremony was held under the auspices of Hon. Dr. Gale Rigobert, Minister for Education, Innovation, Gender Relations and Sustainable Development and Parliamentary Representative for Micoud North.

According to Nyhandra while she is appreciative of all the accolades her intentions were quite noble and was not done out of a need to seek attention.  “I really did not put my mind on persons noticing what I was doing, but just wanted to do something to help other students in the area of mathematics because it is something that I am aware that many students have a problem with.

And so Nyhandra started hosting a Mathematics Monday challenge, posting a Mathematical problem and challenge for other Grade 6 students to solve. The following week she would reward the students who were able to solve the problem with a token and also went the extra mile to walk  others through the problem to the correct answer.

Asked about her own challenges during the partial reopening of school for Grade 6 – CE students, without hesitation she replied “none really.” “I had just a little bit of fear about the Coronavirus, but I think the school and the Ministry of Education did a wonderful job in keeping us all safe and ensuring that everything was in place,” she says.

Nyhandra is keen on walking into her new classroom come September, although she says she is fully aware that things may not be normal anytime soon. However, besides continuing her academic studies, she is looking forward to being part of  some of the clubs at the school. “I have heard so much about some of the great clubs like the Key club and interactive club and I can’t wait to join them,” she says. Ultimately Nyhandra would like to become a doctor and says her greatest inspiration is her mother but would also like to thank her teachers for all of their support and hard work.

She believes that parents should play a big part in their children’s education by supporting them and showing them love. Her sentiments were echoed during the ceremony by one of the speakers Mrs. Fern Dornellly, Principal of the Micoud Primary School.

Speaking directly to the parents in attendance, who she says were also tested during the learning at home experience, the school principal stressed that more than assisting with their school work, the students needed an encouraging mom, a supporting dad and someone who believes in them.

The ceremony which was held on Friday July 31, 2020 honoured the top two Common Entrance students from the various Primary schools in Micoud North including Nyhandra Louison-Augustin .

Addressing the ceremony which she described as “particularly poignant and moving”  Dr. Rigobert said that it was important to host such an event to not only recognize the good work that the students had done but to also share in the celebration with their parents,  teachers,  guardians and  principals. “Because it tells the entire story, your success is largely attributable to their collective effort – your parents, your teachers, your principals and a very supportive community. So let us all together acknowledge that collective effort as we celebrate today’s awardees,” said Dr. Rigobert.

She went on to say that the students had succeeded against very extraordinary odds stacked high against them due to Covid-19.

“So your performance speaks not only to your intellectual aptitude but your emotional and psychological strength as well and I want to acknowledge that,” she emphasized. According to Dr. Rigobert every facet of their being was tested, their very mettle was tested and they proved to be resilient, to be strong and to be intelligent.

Dr. Rigobert went on to recognize “the herculean effort” of the ancillary staff – the cleaners, caretakers, gardeners, watchmen – who she said went in weeks ahead to ensure that the schools were prepared.

Each student was presented with a certificate and laptop computer for their achievement. The grade six teachers were also presented with laptops while the principals were rewarded with gift certificates for spa treatments.

The generosity of corporate sponsors such as B&B Money Savers Inc. and Computer World was also acknowledged.