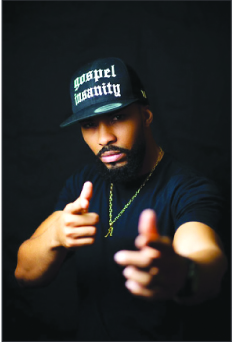 Arnold Jules a.k.a. A J is a 29-year-old Gospel rapper/songwriter from the island of Saint Lucia.

At age eighteen his life drastically changed, he got saved, and from then on, his lyrics changed. He no more wrote and sang for the world but for Jesus Christ his Lord and Saviour.

Since then, A J is the most sort after Gospel Rap singer in St Lucia and connects to the youth in the society on many levels as he pours out the message of the Gospel in Rap.

Some of his most noted performances have been at Skinner Park in San Fernando, Trinidad 2012. In July 2013, A J took part in the concert ‘Praise Explosion’ alongside headliner St Matthew of Jamaica.  In 2014 he was invited to a revival concert at the Living Word World Outreach Church in Grenada. In 2015 he ministered at a three-day conference and a benefit concert in Diego Martin, Trinidad at the Divine Destiny Worship Center. He has also ministered at many events in his homeland, which he is very proud of.

In February of 2020, for Saint Lucia’s Independence Day,  he released a single track featuring ‘Roulex’ titled ‘758’ which he had submitted to the National song Competition in 2019 celebrating Saint Lucia’s 40th Anniversary, where the theme was ‘We are All In’.

Always seeking to bring the good news abroad to persons in other countries, A J was the only foreigner to be included in the Belize Virtual Music Festival with the episode – Backstage Pass: Worship – which was aired and viewed in many parts of Europe, USA and the Caribbean on Friday, July 17.  He performed ‘758’ and did a soft launch of ‘Gospel Insanity’.

Again 2020 sees A J releasing as a single-track recording, his most popular song to date ‘Gospel Insanity’ which he has been performing since 2011 where he entered and won Caribbean Youth Fest 2011.  This song continued to grow in popularity as he performed it at various events across the country and regionally as well. This song is accompanied by the video of the same title, produced by Wolf Art Production.

This young man continues to touch many hearts wherever he goes with his testimony of how Christ saved him, and it is his desire to do so worldwide.  Look out for new single releases as he gets ready to release his new album by the end of 2020.