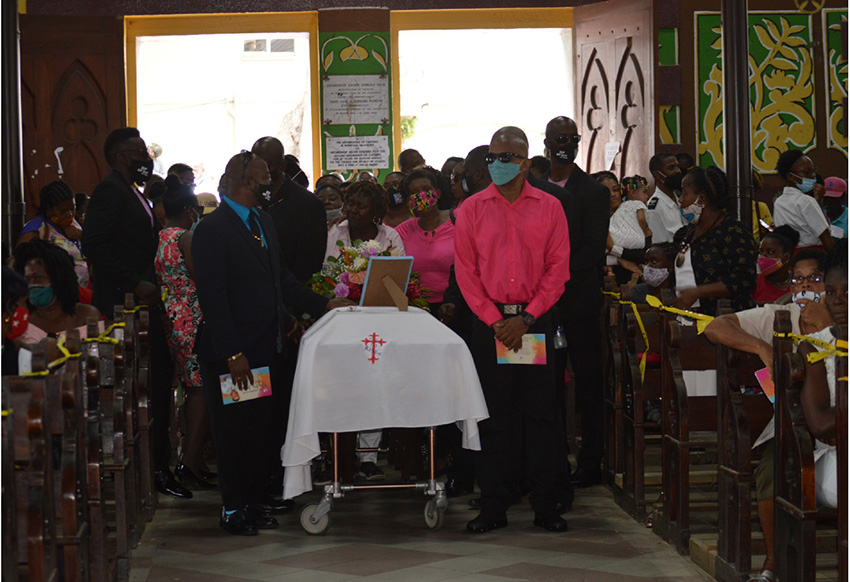 It is often said that we only have a true glimpse of the frailty of life when we lose someone. Family and friends of Dexter “Dry Bones” Felix were reminded of that sad reality as he was laid to rest on Friday, July 24.

Felix, a young father, was one of two men shot in a drive-by incident earlier this month. The other shooting victim in that circumstance was Francis ‘Tiny’ Atlandor, who also lost his life. Family and friends of both young men were shocked to learn the news.

Dexter’s fiancée Soriah John recalled the incident in several news reports, one in which she said she’d just put their baby to sleep on that fateful day (July 13), when a loud explosion got her attention. After making sure the sound hadn’t woken their baby, she’d gone to find Dexter to ask whether he’d also heard the noise, only to discover him in a pool of blood, barely moving.

Days later, his family and friends gathered at a local funeral home to say their final goodbyes, ahead of laying him to rest. A cloud of sadness seemed to cover everything in the vicinity, as those who had been nearest and dearest to him, most still shocked he’d lost his life so violently, said their final goodbyes.

Once the cries faded as those gathered readied themselves to get to the Cathedral in Castries before laying him to rest, the rumbling of bikes served as a bittersweet reminder of something Dexter had once loved, which had also given him life. Just before 2 p.m., the bikers made their way to Castries, with expectations of a procession to take place there in memory of the fallen young father.

The VOICE sends out our condolences to the family and friends of Dexter “Dry Bones” Felix, may he rest in peace.