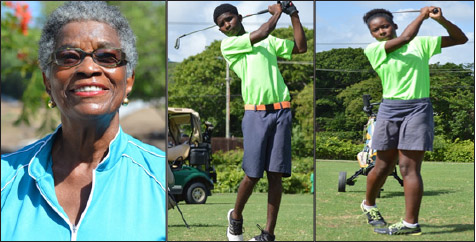 Sports enthusiasts in Saint Lucia are starting to breathe a sigh of relief, but are still keeping their fingers crossed for the return of on-field and on-court action four months after a number of National Sports Federations (NSFs) including the Ministry of Youth Development and Sports shut down all national and school related sporting activities due to the coronavirus pandemic.

Coming off the blocks will be the Grow Well Inc Junior Golfers. The organizers are continuing their final preparation which would include the Covid -19 protocols with the Sandals Golf Club to stage their 9th annual golf summer camp that is scheduled to commence on Monday 20th July from 8.00 a.m.

Grow Well Board Member, Cofounder and Director of the Junior Golf Programme (JGP), Collen Newman spoke to the VOICE earlier this week and noted, “It was supposed to be a two week camp and that might yet happen, but I will make arrangements for the three available mornings, Monday 20th, Tuesday 21st and Thursday 23rd and see how things go and make a decision on the second week.”

Collen added, “Sandals is working with us to make sure that this is both an enjoyable and safe experience for our young golfers. It is amazing to me that Sandals still wants the youngsters to have the camp, given these uncertain times. I am very grateful to them; at present we are looking to establish rules to make it safe for the golfers”.

According to Collen, a total of 24 aspiring golfers including four who have graduated from the Junior Golf Programme (Rayshorn Joseph, Samuel Richelieu, Lisa Daniel and Queen Jones) will also assist at the camp. The other outstanding juniors including current champions Keymanie Thomas, Adrian Richelieu, and Celina Lubin will also be in the thick of things.

In March, the coronavirus pandemic threw the schedules/calendar of events of a number of national sports federations into disarray.

These were just some of the major sporting events for the first half of 2020.

Saint Lucian student athletes at the secondary schools this year will miss defending their 2019 Windward Islands School Games (WWISG) championship slated for Grenada, July 24th to August 3rd. According to reports reaching the VOICE, the championship has been cancelled.

On the field of play, the SLFA has indicated that come late August or early September they will kick off with five competitions (Under 11, 13 and 17 male; Under 13 girls and District senior female).

The commencement of the above national football competitions under the SLFA banner will more than likely pave the way for its 19 football leagues to start their respective tournaments. First off the block will be the Vieux Fort South Football League and according to a reliable source, the league is expected to start their competition as early as August. More information as to the logistics that will be in place in terms of Covid -19 protocols and the format for the competition will be made available in the coming days.

The question remains as to how much longer it will take for the machinery of the other major team sports to get into play, even if there will be no fans at the various venues or the organizers simply accept the 200 spectators and COVID -19 protocols mentioned recently on the National Television Network (NTN) by Prime Minister, Allen Chastanet.

On the other side of things, school sports are perhaps the most affected of all, but fortunately for the Ministry of Youth Development and Sports, schools are out for the summer holidays and will be reopening on September 7th .

From the outside looking in one will hope that the many stakeholders to include the Ministry of Education/Ministry of Youth Development and Sports; the Chief Medical Officer; the Physical Education Teachers Association (PETA) and the various sponsors who support school sports will take a critical look at the Core Principles of Resocialization and Covid -19 Protocols when schools reopen for the new academic year in 51 days time.