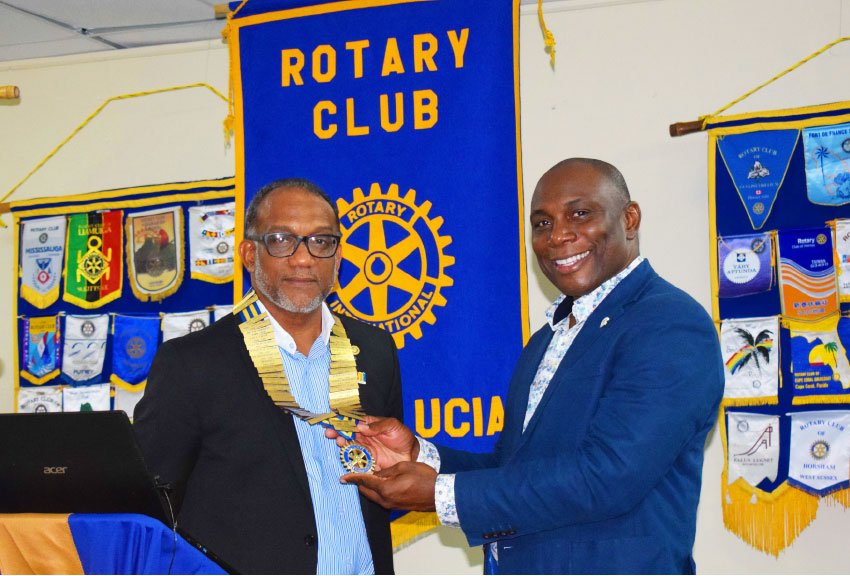 ON June 27th the Rotary club of Saint Lucia met at the NSDC Conference room for the 54th handing over ceremony. Some members said the return of Leathon Khan was historical as he will be the fourth person to serve as president in the 54-year-old club. Founding member Sir Garnet Gordon served two terms 1966-67 and 1967-68, Lennox Cave was the second serving 1983-84 and 1995-96, while Lawrence Jude served in the year 1997-98 again on the passing of Egbert Mathurin 2003-04. It will be written in the annals of the Rotary Club of Saint Lucia in the year of the Covid-19 pandemic that Leathon Khan returned to guide the club when the world was in crisis.

Outgoing president Barrister at Law Leevie Herelle, in this final address, thanked his executive, by presenting them with specially made plaques of local mahogany and glass for their unflinching support during his presidency.

“One of the commitments that I gave was that we would bring this club to a firm financial footing. I am very happy to be able to say to you today that we reduced the receivables by approximately 75 percent,” Herelle said, his comments prompting a round of applause. The president went on to expound on projects such as, the almost twenty year old wine and cheese fundraiser from which part proceeds were presented to Governor General Sir Neville Cenac, the island wide wheelchair project, and The Rotary mask project where local seamstresses from around the island produced masks that were distributed by the club to children and frontline workers in an effort to stop the spread of the Coronavirus.

Herelle went on to say, “The most gratifying project to me was being able to deliver computers to my alma mater.”

Like he was born to handle crisis, three months after Leathon Khan took office in 2001, the United States was hit with the events of 911 which affected the world, yet the club was able to undertake most of its projects for that year, including purchasing a mobile blood bank for Saint Lucia costing over two hundred thousand dollars. Now three months before assuming office the world is faced with a bigger problem – the covid-19 pandemic.

In his acceptance speech Khan said, “The post-covid future ahead of us if anything should force us to adapt, to be resilient, and to want to win. This is the vibe emanating from the leaders in the district and Rotary across the world in the recent online training we’ve been having.”

Khan went on to say, “Our proposed community projects and the initiatives we have planned are deliberately aggressive and bold; they are purposefully ambitious because that’s how it should be, but it’s going to require a strategic approach to be successful. The new normal we face requires smart, creative thinking; that’s the approach we plan to take.”

He ended up by saying all hands will be required on deck and that all in the Rotary family should be charging in the same direction. In addition, Khan has proposed a three-year plan to be used by future presidents.