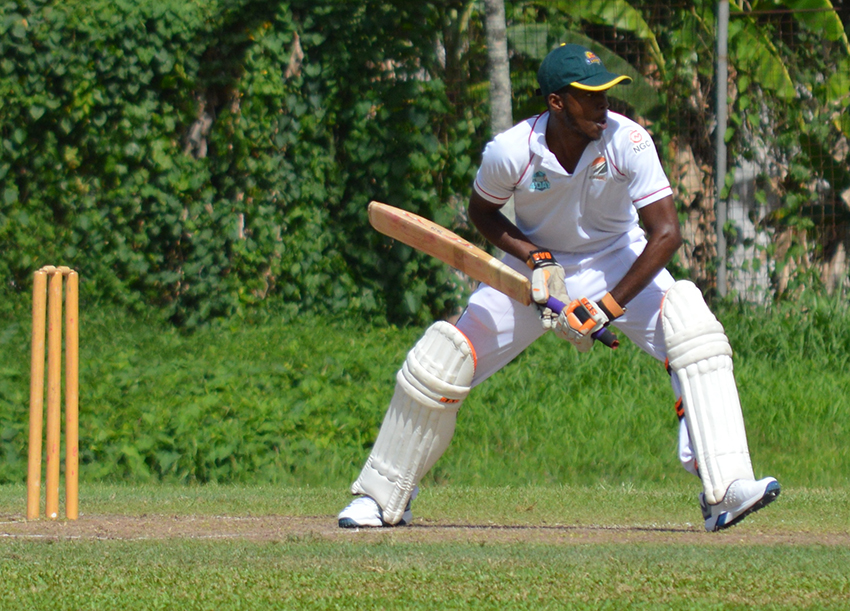 Cricket action continued this past weekend at various venues around the island in the 2020 Adventist Premier League (APL) T20 tournament sponsored by Eagle Freight Brokerage Services.  The highlight of this weekend performances, Kevin Augustin scoring the first century, 100 off 52 deliveries against Bocage.

There were other good performances also at the weekend coming from Kester Charlemangne 92 for Millet against Rising Stars; Bradley Marquis 79 for La Guerre versus Comeback Kings; Charlton 78 for versus Bocage against  Desruisseaux; Gerson Joseph 61 for Rising Stars versus Millet; Charles St. Ville 53 for Bocage against  Desruisseaux; Zidane Arrendel 4 for 23 for Central Blasters versus Gros Islet; Marcus Nelson 3 for 14 for Gros Islet against Central Blasters and Lakshman Persaud 3 for 6 for United Raiders versus DC United.

In the first match at Grande Riviere Playing Field (GRPF), Comeback Kings batted first, scoring 138 for 6 in 20 overs versus La Guerre. Top scorers were Hubert Joseph with 37, Nelius Smith, 28 and Devraj Mandroop made 17.

Bowling for La Guerre, Nixon Jean took 2 wickets, while Julian and Garvin had 1 wicket each.

Chasing 139 for victory, La Guerre scored 142 for 1 in 15 overs. Man of the Match, Bradley Marquis with 79 and Zaheer Julian 26 were both undefeated while Nixon Jean made 17.

In the second match at GRPF, Gros Islet (GI) batted first against Central Blasters and scored 120 all out in 18.2 overs. Lee John top scored with 47 and Marcus Nelson contributed 24.

Bowling for Blasters, Zidane Arrendel grabbed 4 for 23; Morville Cyril took 3 for 32; while one wicket each was taken by Carlson Jones and Macklin Jules.

In their reply Central Blasters came close and managed 115 for 8 in 20 overs. Kern Xavier with 31 and Jonathan Paul with 28 were the top scorers.

Bowling for Gros Islet, Marcus Nelson picked up 3 for 14 and Cyprian Servian 2 for 11; one wicket each went to Jerdell Cyril, Khan Elcock and Lee John.

Gros Islet won by 5 runs and Marcus Nelson was voted Man of the Match.

At Belair and in Division 2, Mini Bus batted first and scored 120 for 6 in 20 overs versus Vanard.

Top scorers were Chiquot Pierre who hit 48 and Fabien Desir made 14.

Bowling for Vanard, Denver Edward had 2 for 12 and Kirtley Denis picked up 2 for 15

In their reply Vanard reached 123 for 5 in 18 overs. Nixon Gustave with 30, Eddy Sydney 26 and Denver Edward 13 not out were the main contributors.

Vanard won by 5 wickets and Denver Edward adjudged Man of the Match.

In the 2nd match also at Belair, Div 1, Rising Stars batted first and scored 155 for 6 in 20 overs versus Millet. Greson Joseph 61, Andel Love 41 and Kemuel Auguste, 14, were the top scorers.

Bowling for Millet, Aloysious Charles bagged 2 for 28, Highland Augustin, Scotty Justin, Kester Charlemagne and Mervin Charles had one wicket each.

Millet replied with 157 for 5 in 15 overs with Man of the Match, Kester Charlemagne belting his way to an unbeaten 92. Scott Justin contributed 23 and Millet won by 5 wickets.

At Anse Gers playing field, Desruisseaux drummed up 193 for 7 in their 20 overs versus Bocage. Kevin Augustin hit the first century of the tournament, 100 off 52 balls and Kirby Paul made 41.

Bowling for Bocage, Kiwayne and Yan took 2 wickets each.

Bocage managed 170 for 5 off their 20 overs with main contributions from Carlton, 78 and Charles St. Ville 53.

This was all the information available at time of reporting.

Mount Olives won by 9 wickets; Aneal Charles was adjudged Man of the Match with figures of 3 for 29 and scoring 33 not out.

This was all the information available at time of reporting.

In the 2nd match at La Ressource, Dennery playing field, Dennery batted first versus Labayee and compiled 82 for 9 in 20 overs.

Shallamar Biscette with 21 and A. Flavius 12 were the main contributors.

Labayee won by 6 wickets; Shervon Leo was named Man of the Match.

The last Div 1 match in Round 1 played out at Balata playing field between United Raiders Cricket Club (URCC) and DC United which is the team named after deceased Dhanraj “Chaz” Cepal, son of APL Chairman, Cyrus Cepal.

Bowling for DC United, Jervaughn Charles took 3 for 10 and Nyeem Rosemond took 2 for 33 and one wicket each to Stavon Gabriel, Simeon Dalkhan and Daniel Gilbere.

In their reply DC United were bowled out for 68 in 17.2 overs. Joshua Cepal made 15 and Stavon Gabriel made 13.