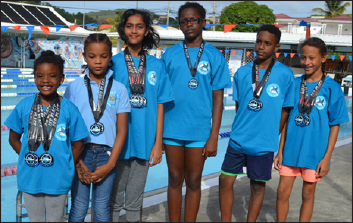 It’s easy to say that the amount of time a swimmer spends focused on achieving his/her goals is simply the number of hours he/she practices per week. Although these hours devoted to training are incredibly important, those who know best most often forget about the extra, time-consuming measures they go through to ensure they are at their peak fitness level in the pool before a local, regional or international championship.

Last weekend, in one of the VOICE’s lead sports stories entitled, “Life in the Pool Slowly Returning to Normal”, it would have seemed that life at the Rodney Heights Aquatic Centre (RHAC) may have been returning to some normalcy. That however is not the case when it comes to the competitive swimmers from the south of the island. For them it’s like a living hell, to say the least.

Earlier this week the VOICE spoke to the President for the Southern Flying Fish Swim Club, Vicky Henry, about the challenges confronting the swimmers under her watch as it relates to swimming during this Covid -19 era and also the many promises made by politicians.

“In terms of availability of a pool, we used Coconut Bay which is currently closed and putting their own Covid -19 procedures in place,” she shared. “The pool at Tobierre residence is too small taking into account social distancing protocols set by Saint Lucia Aquatic Federation (SLAF)”.

Swimmers have also been training at the Rudy John Beach (Laborie), an undertaking that comes with issues of its own.

“Reef, strong currents, water quality, small group size (due Covid -19 protocols) and reduction in numbers as parents are not comfortable with their children in the ocean,” she added, going on to highlight some other areas of concern.

“Due to parents being out of work the numbers have been further reduced,” she said. “The new location is more difficult to access for parents who do not have their own transportation – some are required to take two buses. Swim times had to be brought forward to ensure sessions are complete within daylight which does not work well for working parents.”

According to Vicky, “At present swimming is only available to our competitive swimmers as there is a no touching policy (due to Covid – 19), which would make it not safe for the younger swimmers”.

Additionally, “Due to the low number of swimmers, the individual term fees had to increase yet the number of practice days had to be reduced from four to three to be able to pay the coach. As a club we were unable to maintain the coach’s salary as there was no swimming and now with the reduced numbers the pay had to be cut. This is our coach’s only source of income”.

With the Atlantic hurricane season already open she added, “We anticipate as we move into the hurricane season that the number of days for swimming will be further reduced as the seas will get rougher making it impossible to train”.

Backup plan: “Well for us in the south, the ocean has always been the backup.”

In terms of promises by politicians to build an aquatic facility in the south, Vicky noted, “I don’t play politics, but there have been promises made by both parties, none of which have delivered. We have been grateful for assistance from our corporate partners for the use of the pools”.

She continued, “Nowhere on the island is there a public pool, so we will continue to agitate through our governing body, the SLAF for these needed facilities to be built”.

Was a community pool ever on the cards for the south from SLAF?

“I know the government had plans for one to be built in the Bruce Ville area that I later heard was scrapped,” Southern Flying Fish Swim Club’s President said. “The SLAF had also secured some funding to build one in Black Bay, but we are waiting for Invest Saint Lucia to confirm in writing the land which had been agreed upon, nothing more after that”.

What is the SLAF doing about a quality pool for the south?

“The SLAF would be in the best position to answer that,” she said. “They have been talking and talking, but it’s mostly hot air, they have not engaged with us for a while now, so I don’t know. Over a year ago we suggested a location; they came back with another location after talks with the District Representative for Vieux Fort South. They said that they would need financial assistance; we mentioned that we had some parents who had access to some heavy duty machinery and we could mobilize them to reduce on the cost as it would be hard with the business climate in the south to get any funding, nothing more after that”.

The VOICE also spoke to the President of the Saint Lucia Aquatic Federation, Eddie Hazell about the planned pool for the south.

He said, “The construction of a pool in Vieux Fort is a Saint Lucia Olympic Committee (SLOC) and Saint Lucia Aquatic Federation initiative; the drawings done, land leased. He noted that plans were “on hold for now”, with hopes of getting things back in motion next month.

In terms of size/ lanes: “It’s a 25 metre pool/six lane, two lanes for the elderly and learners to swim,” he noted.

In terms of contractors, Hazell said, “We haven’t reached that stage yet, but we have received two proposals from Vieux Fort.

Asked about government contribution towards this long overdue facility for some of the island’s finest swimmers, just one word from the SLAF President, “The land”.

The VOICE also contacted SLOC Inc. General Secretary Alfred Emanuel, a man of a few words. He said, “The US$50,000 grant from PASO for now that is what has been committed publicly. We have secured that funding from our funders, so yes, it goes down as an SLOC Inc. contribution”.