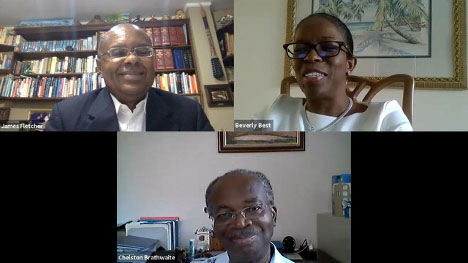 San Jose, 29 May 2020 (IICA). The effects of the Covid-19 pandemic on world tourism and trade demonstrate that Caribbean countries must modify their current economic development model, which is highly dependent on tourism and food imports.

“In China, I learned that the word crisis has two components: danger and opportunity. Within the context of the coronavirus pandemic, we are already in the danger zone, so we have to seek out opportunities, which could emerge later on”, explained Chelston Brathwaite, Director General Emeritus of IICA and former ambassador of Barbados to China, in the latest webinar aimed at analyzing post-Covid-19 scenarios for agrifood systems in the Americas.

During the webinar, Brathwaite spoke with James Fletcher, former Minister of Energy of St. Lucia. These virtual meetings have been organized by the Inter-American Institute for Cooperation on Agriculture (IICA).

Brathwaite and Fletcher agreed that the pandemic has brought to light five of the Caribbean region’s main vulnerabilities: the impacts of climate change (evidenced by droughts and more hurricanes), countries’ debt levels, high rates of chronic diseases (such as diabetes, hypertension and cancer), dependence on tourism and food insecurity.

“The current crisis has demonstrated just how fragile our development agendas are. In 10 Caribbean countries, tourism accounts for more than 25% of the national GDP, while in Eastern Caribbean states, this figure ranges from 30% to over 80%. Tourism is the sector that has been hit the hardest, and it will be one of the slowest ones to recover, which will impact government revenues, employment and families”, remarked Fletcher.

The speakers underscored the importance of connecting the agriculture and tourism sectors in order to transform the Caribbean region’s development model.

“We must revive our agriculture sector, as well as appreciate and understand the contribution it can make to development and food security. We must also acknowledge the opportunities it affords to depend less on imports, revitalize our economies, create new jobs and businesses related to food production, as well as improve our products by replacing imported food with more nutritious, local products”, stated Brathwaite.

“Our tourism industry must be more sustainable. We must ensure that it leads to social equity”, noted Fletcher.

“In my opinion, the most important task is strengthening the relationship between tourism and agriculture”, he added.

The specialists explained that it is imperative to modernize agriculture through the use of technologies and renewable energy; foster trade, regional integration and market intelligence; make better use of arable land and water; invest in research; and achieve progress with respect to agricultural insurance and farmers’ access to micro-funding opportunities.

Brathwaite, who served as Director General of IICA from 2002 to 2010, explained that intraregional trade in the Caribbean must be improved.

“We face issues transporting food from one part of the Caribbean to another. We need regional transportation systems; an information system to keep countries informed of what is being produced, where, by whom and at what price; as well as a regional food security fund to address our current reality”, he remarked.

Brathwaite and Fletcher commented that Caribbean countries possess the productive capacity and natural resources required to achieve those objectives. They indicated that Guyana, Belize and Suriname could become regional food baskets and, in turn, contribute to reducing food imports by at least 5%.

The specialists noted that, as a result of decreased tourism and falling oil prices, economic activity in the Caribbean is expected to contract by 6.2% this year, at best, or by 15% in the worst-case scenario.

They explained that the pandemic will also affect remittances, which provide the Caribbean region with about USD 15 billion per year, mostly from the United States.

The webinar, which included the participation of James Fletcher and Chelston Brathwaite , was moderated by Beverly Best, Director of External and Institutional Relations at IICA.

IICA is the specialized agency for agriculture in the Inter-American system, with a mission to encourage, promote and support its 34 Member States in their efforts to achieve agricultural development and rural well-being through international technical cooperation of excellence.