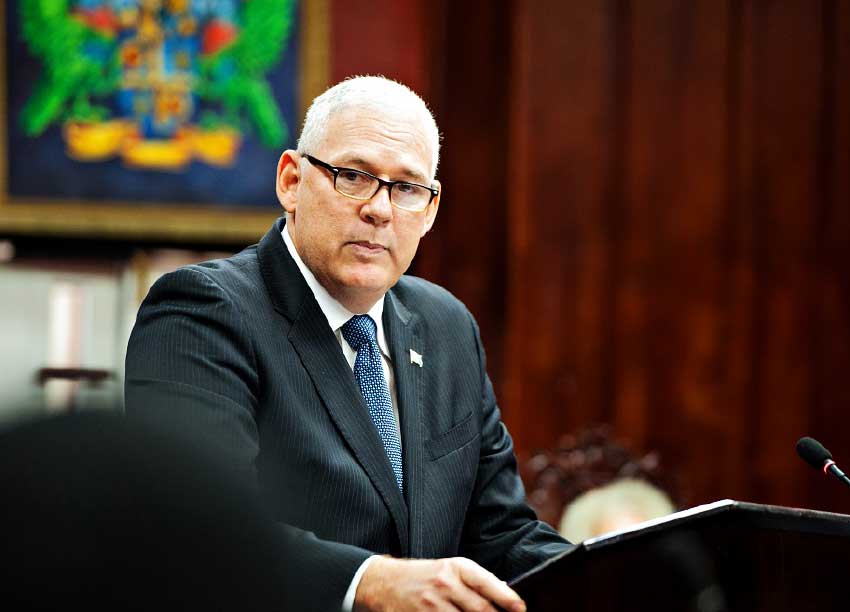 As the island remains on the brink of yet another State of Emergency (SOE), Prime Minister Allen Chastanet addressed the House of Assembly on Tuesday, May 26, 2020.

At the heart of the House sitting was the extension of the existing State of Emergency for four months, until September 30, 2020.

Despite Saint Lucia’s cases being low, with just 18 being reported to date, PM Chastanet said it was envisioned that Saint Lucia would experience recurring waves of the virus as restrictions were lifted as part of a five phased re-opening approach.

The PM quoted UN Secretary General António Guterres who noted recently that the world was facing a human crisis unlike had ever been experienced, with a recession worst than that of 2008 likely.

The Prime Minister referenced his own April 8th Address to the Nation where he’d noted that the current outbreak had created two crises, one health related and the other economic, “the likes of which we have never seen.”

Chastanet detailed how things had progressed internationally in the wake of Covid-19, and Saint Lucia’s response including the establishment of a National Health Security Committee earlier this year.

“We never thought for a minute that St Lucia would be spared from the spread of Covid-19, so we carefully planned to minimize the impact on Saint Lucia,” he noted. To date… there have been no deaths, and in the last 23 days no new cases. This success has much to do with the declaration of a State of Emergency.”

The PM commended front-line workers, corporate St Lucia and friends overseas who had donated to help in the fight against Covid-19. He also thanked the Opposition for their support noting, “we must put aside political ties.”

Business wise, the PM said activity would take a while to get back to normal. He echoed the view of some international experts and observers that the worst was yet to come, and that the coronavirus would likely never go away, but rather become just another endemic virus in our communities.

Quoting WHO Director General Tedros Adhanom, Chasnanet noted that while it was still possible to try to control the Covid-19 situation, there was no real way of easing restrictions without triggering a second wave of infections.

Regarding Saint Lucia’s current status, the Prime Minister stated, “The all-clear has not been given. Our strategy has shifted… according to the CMO… although we have flattened the curve as we lift restrictions, we anticipate a resurgence of cases as most countries remain in active infection. Our population remains susceptible…. It is envisaged that as we progress and move from one phase to another, we will experience recurring epidemic waves with continuous low level transmission… therefore our efforts must ensure we maintain waves as low as possible, so as not to overwhelm our health care system.”

As he sought to give justification for an extension of the island’s State of Emergency with all associated restrictions including an island-wide curfew, the PM stated, “To this end St Lucia has adopted a phased approach to this new normal… it is evident that much of the progress we have made thus far was effectively achieved through the implementation of a State of Emergency.”

The PM explained that the State of Emergency “allows us to move swiftly between phases as the virus evolves. This would not be possible under normal circumstances.”

The island is currently on phase 3, with phase 4 pending for the re-opening of the economy. In that light, on June 4, 2020, borders will be open to international visitors.

The PM noted that all businesses were allowed to resume operations as of last week, with protocols put in place for the safety of the public.

Even with the proposed measures, the prime minister noted that come the re-opening of the island’s borders, possible threat was “a reality”.

As the world grapples with how best to re-open, PM Chastanet noted St Lucia had not been spared from economic fallout but could not remain stagnant. It was necessary to move forward cautiously, in the words of the PM, being cognizant of risks that lay ahead. As such, the immediate goals at hand to be achieved were rebuilding and saving lives… and not necessarily in that order. To that end, government was sticking to their five phase re-opening approach, with the possibility of reverting if needed.

PM Chastanet assured the public that there would be “constant monitoring to ensure we are on track”, and other measuring of indicators.

“Weekly routines will keep us focused on what is important… and allow for changes,” he noted. “The State of Emergency is necessary to allow us to pull back and make changes if necessary…”

With that said, Chastanet made it clear that the declaration of a SOE was “no small matter” but was necessary as it was the best method for timely execution of protocols and guidelines.

“Like a hurricane, the best chance of survival is to prepare,” he said. “A SOE for the next four months will allow us to monitor the protocols put in place and to make adjustments.”

Despite successes thus far and Saint Lucia standing out in the region and world for its handling of Covid-19 nationally, the prime minister noted, “we cannot rest easy.”

“This further extension is being sought to facilitate quick response if another outbreak of Covid-19 occurs,” he said, adding that the Cuban medical team was also only authorized to work under a State of Emergency.

“With God’s guidance, this government is committed to remaining on the right path in the weeks and months ahead,” the Prime Minister said.