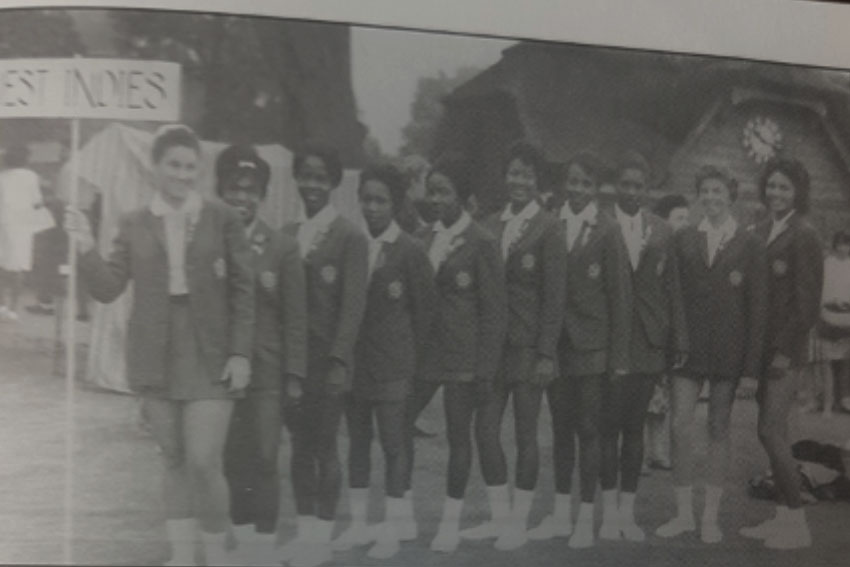 Saint Lucia has lost yet other sports personality; earlier today Saint Lucia woke up to the news that former national netball player Joyce Auguste has died at the age of 76. Her lifeless body was recovered at her home at Arundell Hill (Marchand).

Joyce was the Saint Lucia first Sportswoman for the Year, winning the title in 1969.

More on Joyce in the Saturday 23rd May 2020 edition of the VOICE.

In the meantime we share with you some history of Joyce.  Taken from ‘Outstanding Sports Personalities of Saint Lucia’ written by Rupert Branford in the year – 2000.

Not all of sporting heroes were men. Up to 25 years ago, the major sports disciplines were considered the preview of males. Apart from netball and occasional athletics meets usually served up by St. Joseph’s Convent and the C.Y.O. women hardly ever featured in sports. However, St.Lucia was still able to throw up a significant number of female athletes, especially netballer, thanks largely to the administrative efforts of persons like legendary Euralis ‘ Boots’ Booty, Aldith ‘ Birdie’ Isaac and Yolande Etienne among others.

There were some outstanding sprinters, most notably the Brathwaite sister, Jean and Lindell. Jean, at 19 was able to run the 100 yard dash in seven seconds, an outstanding feat by any standard. However, there was no follow –up in terms of organized competition to capitalize on those feats. It was only in recent years that Saint Lucia saw the regular emergence of top female athletes just as we have begun to fall in line with the pattern set by other countries.

In netball, however, quite a number of local athletes did the country proud. With the Saint Lucia Netball Association granted recognition by regional and international organizations, we saw Joyce Auguste and Acynta Auguste being among the first Saint Lucians to be selected on the West Indies Netball Team to tour England in 1963, in the first ever world tournament. We have since been witness to the star performances of netballers like Paula Calderon and Martha Biscette, both being selected on the West Indies Netball Team.

The same theme which characterized the stellar performance of our sporting heroes are evident in the approach of these female sporting heroines – dedication, discipline and love of the sport.

In a recent address to the annual meeting of the Caribbean Netball Association (CAN), Joyce attributed her success in sports to, in her own words: “Burning ambition to excel in the field of sports, which led me to appreciate that to fulfill one’s ambition requires cultivation in one’s self a sense of discipline, commitment and willingness to persevere equated with learning to sacrifice time to practice, practice, practice”.

It was this burning desire to succeed which resulted in her being selected for the first ever World Netball Championship in England, where her outstanding performance caused her to be singled out for special mention. The other member of the tea, Acynta ‘Popo’ Auguste, also earned herself some praise, especially in the Windies first game of the series against New Zealand. In that tournament, the West Indies placed seventh from among 11 competiting countries with victories over Ceylon, Northern Ireland, Scotland and Wales.

Following the 1963 World tournament, Joyce remained in the United Kingdom to enter the Trinity College of Music and was part of that institution’s netball team which played in competitions against various universities and Colleges there. She was the only West Indian to play on the Commonwealth versus England side in 1966. Another West Indian was also picked but as a reserve player.

Commenting on her more memorable occasions in netball, Joyce referred to an action photograph which was selected for the official magazine of the All England Netball Association. The photo was captioned: ‘The wonderful stretch by Joyce Auguste is a symbolic of a dramatic lift in the standards of play throughout the Commonwealth’.

In 1967, she return to Saint Lucia and continued to represent her homeland as well as the West Indies on a regular basis. The following year, Joyce won ‘Miss Civil Service’ beauty contest and as a result, received a prize trip to Barbados, Saint Vincent and the Grenadines and Trinidad and Tobago. In Trinidad and Tobago, she had the honour of receiving two trophies on behalf of the Paul Castillo Cricket League because of her outstanding netball performance.

Joyce’s achievement in netball were recognised in 1969 when she was awarded the Sportswoman of the Year’ award. In 1989, she was inducted into the Netball Hall of Fame, along with Euralis Bouty and Yolande Etienne – two outstanding administrators of the sport. Her crowning achievement, however, was the award of the M.B.E. (Member of the British Empire) medal presented by the Queen in 1988, and the Saint Lucia Order of Merit in 1989, in recognition of her services to netball and music.