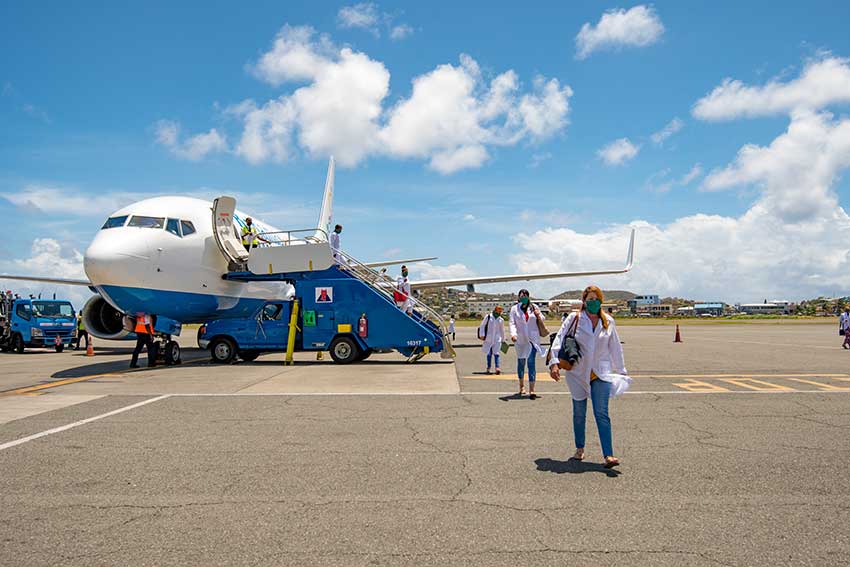 CUBA is once again proving to be quite an ally to countries of the Organization of Eastern Caribbean States by sending medical specialists to some of these islands to help them in their fight against the novel coronavirus.

For instance, Saint Kitts and Nevis, last Saturday welcomed 30 nurses and four doctors, all specialists in intensive care medicine, as part of their fight against the spread of COVID-19.

Twenty-eight members of the Cuban contingent will be stationed in Saint Kitts while the remaining four will be in Nevis.

The Federation so far has recorded seven confirmed cases of the novel coronavirus out of which one is a 10-month-old baby.

Another team of medical professionals from Cuba arrived in Saint Lucia late last week to a warm welcome by the Government of Saint Lucia led by Prime Minister Allen Chastanet.

“We know that every country in the world is facing their own challenges at this time including Cuba and we are so very thankful for this immense show of brotherhood from this longstanding friend of Saint Lucia,” Chastanet said, who went on to thank Cuba’s Ambassador to Saint Lucia H.E. Alejandro Simancas Marin.

One hundred and thirteen medical professionals from the Spanish speaking island arrived in Saint Lucia. In the team are doctors, nurses, bio-medical engineers, and epidemiologists.

Saint Lucia to date has recorded nine confirmed cases of COVID-19 with five of that number confirmed just two days ago.