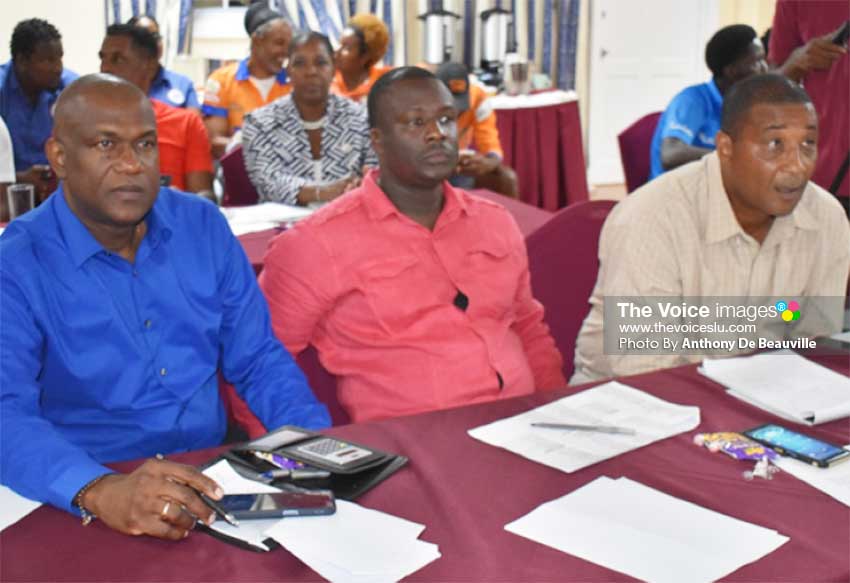 In attendance were CEO SPL T20 – Hasan Eristhee; Director of Sports – Patrick Mathurin; representatives of the former national district champions Laborie Pride, representatives from all the participating teams to include the likes of John Eugene, Johnson Charles, Kimani Melius, Alton Crafton and Eugena Gregg; specially invited guests and members of the media.

Gros Islet Knights line up also include West Indies and Saint Lucia Zouks top order batsman and right arm off break bowler 27-years-old Rahkeem Cornwall. Cornwall is considered to be one of the most feared batsmen in the region on any given day. Other individuals picked on the night included – Vernillius Gabriel, Lee Solomon, Simeon Gerson, Udell Preville and Ryan Goodman.

In 2019 Gros Islet finish fourth and according to Alton Crafton, Coach of Gros Islet Knights they have signaled their intention to turn the tables around in 2020.

The selection of former West Indies left arm orthodox spinner, 36 years old Garey Mathurin, on the South Castries Lions team has sparked some interest and it is still uncertain as to whether Mathurin will be coming as a player or coach. Mathurin last played for the West Indies in 2012 against Australia in Bridgetown, Barbados.

The Lions made SPL history by becoming the first team to have three former West Indies players in their squad. The former champions retained the services of opening batsmen Andre Fletcher and Johnson Charles for the 4th edition of the SPL.

Avatar City Blasters (ACB) also have the first active father and son combination in the tournament. With their second pick in the draft, ACB went for Windward Islands Under 15 all-rounder Daren Sammy Jr. He will join his father and former West Indies two-time ICC World T20 Champion Daren Sammy, in the team that retained the services of the only century maker thus far in SPL, 100 versus Soufriere Stumpers opening batsman Gaspard Prosper. Other players in the squad include – Wade Clovis, Kimani Sexius, Rayhym Joseph and Caleb Thomas.

New comers Laborie Pride in their first pick, grab on to fast bowler, Murlan Sammy, the brother of Daren Sammy. In round 3, 4, 5, and 6 they picked -Mateo Bologne; Sanjay Pamphille; Romain Ramroach and Rick Moses in that order.

Choiseul Craft Masters is still in with a surprise as they are still in negotiations to include overseas players in their lineup.

The tournament bowls off on Friday 15th May from 7.30 p.m. at the Phillip Marcellin Ground (PMG) with former champions South Castries Lions taking on Mon Repos Pioneers.

On Sunday 17th, Mon Repos Pioneers versus Soufriere Stumpers at 3.00 p.m. and Laborie Pride takes on Gros Islet Knights at 7.00 p.m. Both matches are schedule for the Phillip Marcellin Grond.

The tournament heads to the north for two mid-week clashes between Kimani Melius, Gros Islet Knights against Mabouya Valley Renegades on Tuesday 19th May from 7.0 p.m. and the following day, South Castries Lions plays Avatar City Blasters at 7.00 p.m. at the Gros Islet playing field.

Choiseul Craftmasters, defending champions, will play their second game of the tournament on Friday 22nd May at the PMG with new-comers Laborie Pride.

The semifinal and finals are scheduled for Saturday 30th and Sunday 31st May at the PMG.