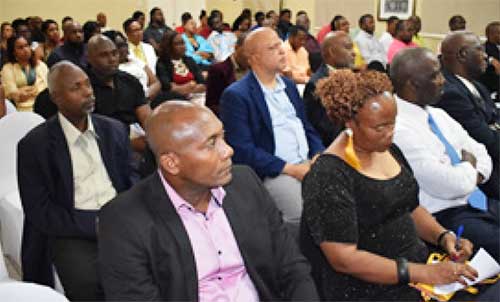 THERE was no changing of the guards for the spots of Junior Male and Female Footballer of the Year when the announcement was made by the orators on Saturday evening during the Saint Lucia Football Association (SLFA) Inc annual awards ceremony held at the Bay Gardens Marina Haven Hotel.

Present on the evening were SLFA President Lyndon Cooper and other members of his executive with the exception of Vice President Charde Desir who is currently out of state, Parliamentary representative for Soufriere Harold Stanislaus; Permanent Secretary in the Ministry for Youth Development and Sports Benson Emile; Sports Director Patrick Mathurin; National Lotteries Authority Chairman Caron Serieux; nominees/ awardees, parents and specially invited guests.

Taking charge of the evening’s gala were Mistress and Master of Ceremonies Examin Philbert and Stephen Marcellin along with Racquel John and Raejean Montoute, the orators.

For the second straight year, the Junior Footballer of the Year award went to Keegan Caul; for the year under review, at school he was voted Most Promising Player and at his club, Pioneers, he was named the Under 15 MVP and Club MVP after winning the Northern Zone Under 17 championship, where he was awarded the Best Midfielder. He also won the Best Midfielder in the ECFH Tournament hosted by Castries Football Council.

Krysan St Louis hit the ground running and captured both the Junior and Senior Female Footballer of the Year awards. She captained the Vieux Fort South senior female team to second place finish (losing only on goal difference) in the SLFA Women’s Championship. St Louis captained the National U17 female team during the CONCACAF U17 tournament in the Dominican Republic and ended as the top goal scorer with a total of eight goals. She also captained the National U20 World Cup Qualifiers in Guyana, where Saint Lucia for the first time in its history, qualified for the second round of that tournament; she also ended up as the team’s top scorer with five goals from four matches.

In 2019 she made her senior debut in Jamaica at the Olympic Qualifiers where she ended up as Saint Lucia’s top scorer with three goals. During the year under review, St Louis scored 16 goals in 11 matches for Saint Lucia and 16 in 8 matches for Vieux Fort South scoring a total of 32 goals in 19 matches.

The Senior Male Footballer of the Year award was won by Vino Barclette, a former Junior Footballer of the Year. He captained his club, Knights, with distinction and was instrumental in carrying them through to win the Promotional League in VFS and also gave his club the edge in the goal during the last SLFA Presidents Cup.

He barely conceded a goal in the Blackheart tournament, which the VFS team went on to win for their 4th consecutive year. Barclette was also outstanding at the Windward Islands Tournament and did a fantastic job conceding only a few goals in the CONCACAF Nations League home and away fixtures.

Two football leagues, miles apart from each other, dominated the Awards Ceremony this time around as they showed their dominance on the pitch and in the classroom during 2019.

In the category of Administrator for the Year, nominees were Shayne Paul and Emmanuel Belase. The winner was Shayne Paul.

Referee for the Year was Kim Charlery, while the Lifetime Achievement Award went to former SLFA President, Marc Louis.

Special Education Footballers of the Year were KermaraVernevil (female) and Alex Pierre (male).

Cooperate Partners Appreciation Awards were given to representatives of South Shoe Store, Scotts Sports and Awards, National Lotteries Authority, the Ministry of Youth Development and Sports, the Castries City Council and the Ice Factory.