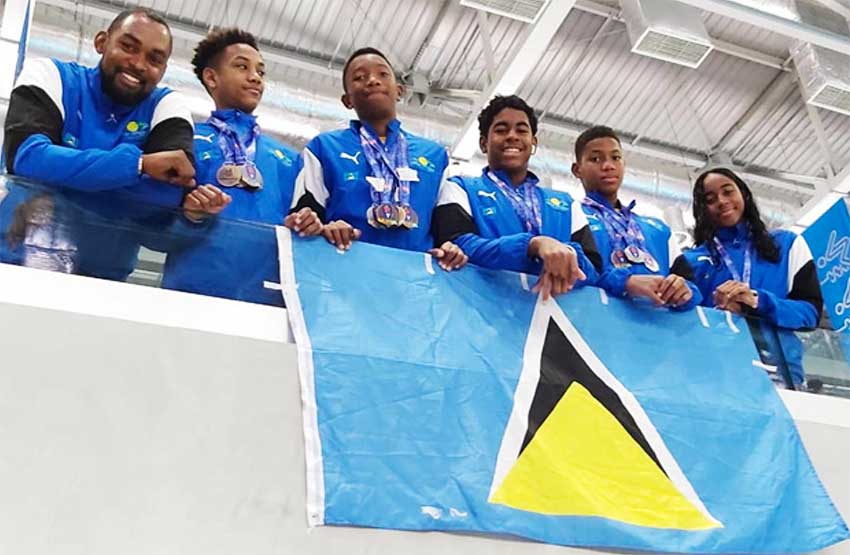 JUST one week after the Saint Lucia Aquatics Federation (SLAF) took home the prestigious award for Association of the Year for the third consecutive time, and young Mikaili Charlemagne winning the Junior Sportswoman for the Year, the first for swimming since 2011 (Siona Huxley), Saint Lucia swimmers have done it again.

It was all greatness throughout as Team Saint Lucia were in a no nonsense mood when they blasted off 2020 with a stellar performance in Lima, Peru for the UANA Swimming Cup which ended on Sunday 23rd February.

According to SLAF Public Relations Officer, Sue Monplaisir, “As our theme goes for 2020, they dug deep with big dreams”. Overall, the team walked away with 6 Gold medals, 7 Silver medals, and 1 Bronze medal.

When the dust settled and points tabulated, Saint Lucia ranked 5th out of 25 countries in the medal count. Their strong performance lead them to place 8th in Team Points finishing with a combined total of 157. They ranked second in overall points for Caribbean countries.

Swimmers from North, Central, and South America as well as the Caribbean Islands competed in the age groups 11-12, 13-14, and 15-17 in a variety of distance and stroke events.
Individually, the swimmers had stellar performances. Naima Hazell, the lone female on the team, achieved Silver in the 50 metre Breaststroke setting a 13-14 girls Age Group Record.

Ethan Hazell shaved seconds off almost every swim he had, setting personal bests in all his events. His grandest performance was most definitely the 50 metres Freestyle. He went in seeded at 25 and swam to a 4th place finish.

Overall, the 11-12 Boys crushed their competition in both the 200 metre Medley Relay as well as the 200 metre Freestyle Relay. They achieved UANA Cup event records in both events. At the end of the meet, Saint Lucia was awarded the trophy for the Age Group 11-12 Boys achieving the most points overall in the age group throughout the meet.

The Saint Lucia delegation lead by coach Peter James and assisted by Team Manager Martin Dorville had dazzling performances each day of the 3 day competition. The SLAF Executive and Members are all proud of each swimmer and their tenacity to achieve more on each swim. SLAF took the time out to thank all those who contributed and supported the team.

Team Saint Lucia was due to return home this morning (Tuesday 25th February) at 7.30 a.m.) via the George Charles Airport (Vigie).