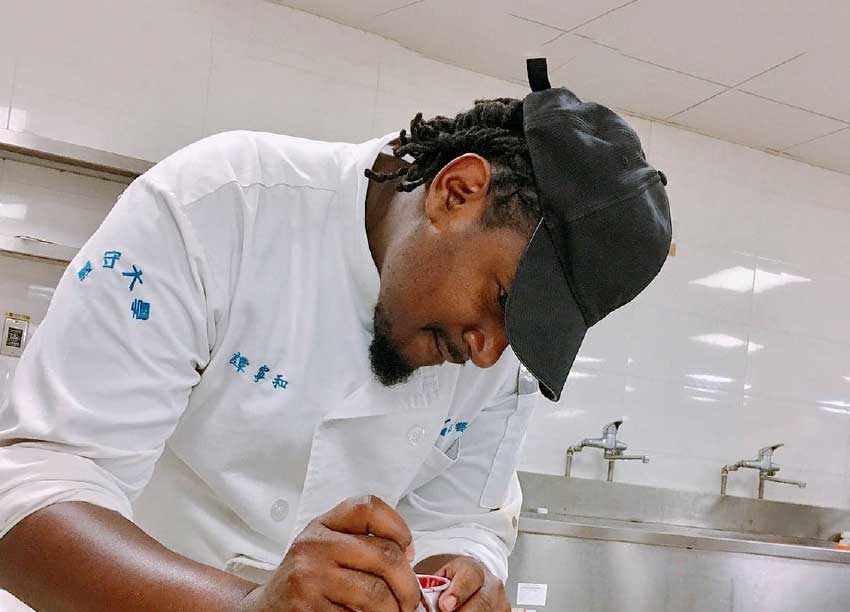 A young Saint Lucian chef has wowed patrons at a local restaurant in southern Taiwan.

Nyhymn Terrance, a third-year Culinary-Arts Management student at I-Shou University, was the guest chef at Legends Bar and Grill in Kaohsiung, Taiwan. There, he treated 40 guests to dishes that spoke to his Caribbean heritage and the skills, styles, and techniques he learned under the tutelage of both Saint Lucian and Taiwanese chefs. His menu included dishes such as roasted pumpkin and spiced spinach duo soup, beer batter roasted chicken with coffee sauce, green banana au gratin, and crème anglaise with mango salsa, among others. Though hosted in a casual setting, Nyhymn maximized on the flavour profiles of the respective ingredients and elevated the visual appeal of the dishes to offer a highly refined experience to the event.

No stranger to the joys and demands of the kitchen, Nyhymn spoke on the memorable moments and challenges of his first chef feature. He noted, “The most satisfying moment at the event for me was when one of the guests told me that he is not a fan of pumpkin or spinach soup, but the one I made was the best he has ever tasted in his life. He also followed up and told me that he never expected green banana would taste so good. I think the most challenging part of the event was the beginning of service when we got a wave of customers all coming in at once and some of the prep work had not been completed, but the team and I quickly overcame that slight hiccup and had smoother service which was sold out and well-received by everyone.”

Nyhymn first arrived in Taiwan in 2016 as the recipient of Taiwan’s MOFA Scholarship. In 2017, he transitioned over to I-Shou University where he was the first Saint Lucian to pursue a Culinary Arts degree in Taiwan.

Nyhymn has had the opportunity to bring Saint Lucian and Caribbean cuisine to the Taiwanese public by participating in several Food and Cultural Festivals, cooking competitions and by catering for small and large private events. Some of his frequent clientele include the Embassies of Saint Lucia and Belize in Taiwan.

This February, Nyhymn will undergo a six-month internship at a 2-star Michelin restaurant in Taipei, where he hopes to refine his skills further towards promoting a fresh, bold, and vibrant image of Saint Lucian gastronomy comparable to other world-renowned cuisines.

When asked about the future of Saint Lucian cuisine, the young chef was confident of its potential to be on the world stage. He paid homage to talented chefs like Nina Compton and cooks in Saint Lucia whom he says are just “one big break away” from bringing the island’s local cuisine to a world-class standard.

As for Nyhymn, he hopes to continue bringing an authentic Caribbean experience to the people of Taiwan.