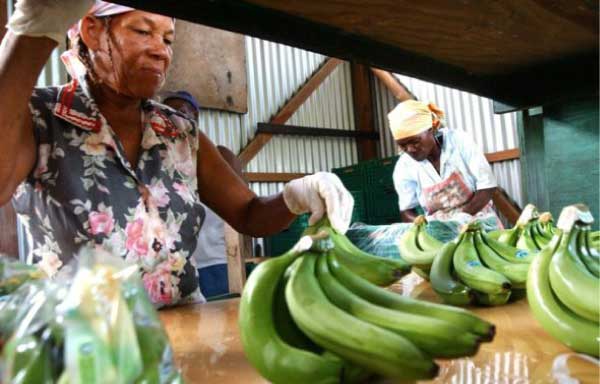 SHIPPING bananas from Saint Lucia to France is not as easy as it appears on paper. And promising to do so when the idea was first mooted in 2016 by the government appeared quite feasible. But with no registered success to date, it seems that the initiative has failed.

Not so said Agriculture Minister Ezekiel Joseph at yesterday’s pre-Cabinet press briefing. Admitting to challenges faced in meeting that initiative at the last House of Assembly meeting, Joseph has not given up hope of local bananas entering the French market, nor will he admit to failure on the part of his government for not getting local bananas into France, close to four years after mooting the idea.

His salvation, it seems, lies in a meeting last year in the United Kingdom where a local delegation met with buyers from France who committed to an agreement with the Government of Saint Lucia. Part of that agreement involves a three-month trial exporting three containers, each containing 1000 boxes, to the French market via Winfresh.

“They (the French) were specific as to what they required from us. The purchase order clearly indicated what they would want in each box, 22 clusters and in a bag, six fingers,” Joseph said.

He also said there was a first shipment to France, however, unfortunately that shipment did not meet the requirement and could not enter France although it left Saint Lucia for France via the United Kingdom.

“We called the company and informed them that this is what we were able to get, at least for the first trial, unfortunately they did not approve of it,” Joseph said.

“Now we are renegotiating with them to see if there is any possibility of marketing loose fingers instead of packed fruit and that is where we are pertaining to the French market,” Joseph said.

He added, “There is no quick fix in agriculture. If you are to meet the requirement it takes time to get the product that is required. Since we have realized the problem we have brought in new varieties with bunches with small fingers,” Joseph said, adding that a new variety of bananas has been planted and is flowering already.

But will Saint Lucia be able to supply the French market with the smaller type bananas it is asking for?

Joseph believes Saint Lucia can, however the mindset of farmers will have to change in order for that to happen.

“When we came in, the programme farmers were involved in was to prune the lower fingers to get standard fruits. So, are you now going to tell the farmers to prune the higher fingers to get smaller fruits? The answer is no, because if you prune the higher fingers the smaller fingers would be bigger. So now we have to look at varieties that can allow us to meet that objective and that’s why we have brought down some new varieties (of bananas). They have been planted and are now flowering and in a couple of months we will see how the fingers come out to see if we can at least meet that requirement,” Joseph noted.

Martinique, Joseph said, was never on the cards as a destination for Saint Lucia bananas.