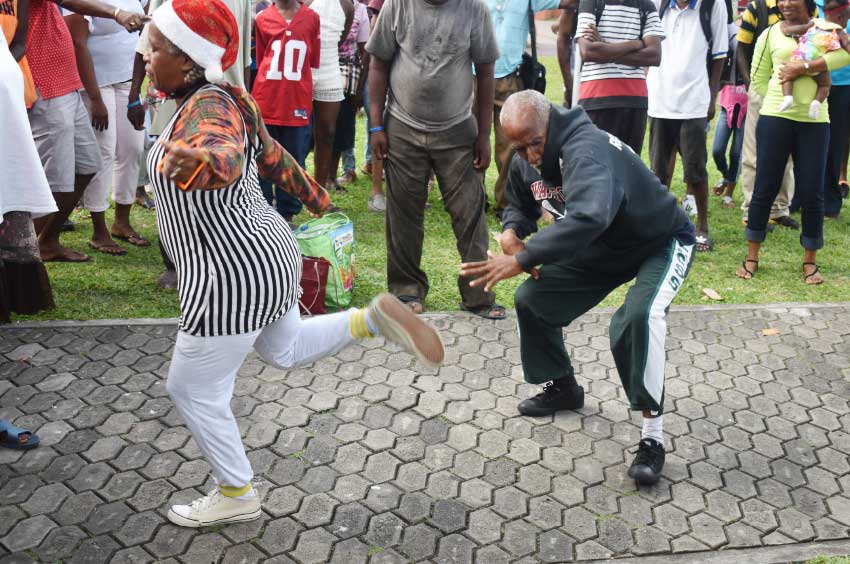 THE festive season brought some good cheer to the less fortunate citizens of Saint Lucia. The good cheer came in the form of a Christmas Party which ‘Feed the Poor Ministry’ held for the poor on Constitution Park yesterday. The party catered to about 200 people and was complete with meals, music and dancing. Attendants came in all ages; from senior citizens to young adults with toddlers.

According to Gaspar Henry, CEO of ‘Feed the Poor Ministry, the initiative to feed the poor began 14 years ago and have continued every year ever since. Gaspar noted that the number of persons who come to ‘Feed the Poor Ministry Christmas Party’ have been increasing each year. He said that persons flock from the rural areas into Castries due to financial hardships.

Gaspar stated, “There have been more persons coming on the line for food. Some people would leave the rural and come into the city. Lets face it… times are hard, times are difficult, but we believe that the senior citizens are responsible for the infrastructure that we are enjoying today, so we shouldn’t leave them behind. We should not hold them ransom when it comes to that time of the year. We feel that we are duty-bound to ensure that the senior citizens receive that piece of the pie when it comes to the festive season”

He went on, “The sponsor who has been there with me throughout the many years; through thick and thin is Flow. I want to express my sincere thanks to Flow for persevering with me throughout those many years. –And the volunteers who came onboard today to assist, I am very thankful and grateful for them for giving of their time. And to the media which has been there with me… I want to say many thanks.” Among the volunteers were members of staff from the various sponsors.

Placide Noelien, Representative from Flow, was also at Constitution Park. He said, “We’ve been with Gaspar for quite a few years. And it is something [Feed the Poor] that we take great pride in doing; it’s something that we’re really happy about. I think Gaspar is doing a phenomenal job in terms of the selflessness and the amount of sacrifice. And this is just our little way of giving back as well. So we’re just really happy to always be in support of him and what he’s trying to do.”

The persons who attended the party at Constitution Park were served meals, fruits and drinks by the volunteers. Gaspard, in an attempt to heighten the cheer of his guests, held a spontaneous dancing competition in which six contestants participated. Small monetary prizes were awarded to two of the best dancers complements Jason Hullinseed, Castries Constituencies Council (CCC) Public Relations Manager. As modest as the prizes were, the winners were nonetheless pleased to accept them. The dancing drew a crowd of spectators, who witnessed that even the very poor and less fortunate could have a jolly good time in this festive season.