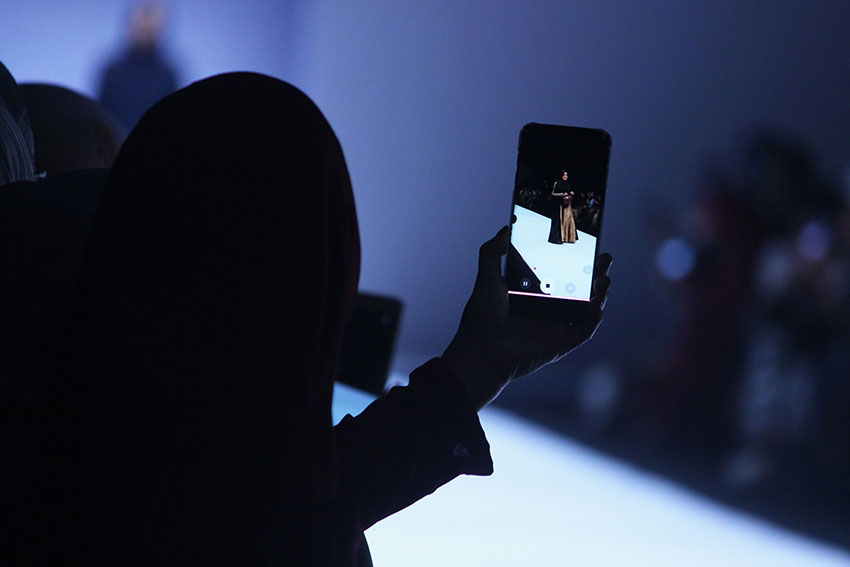 Over 500 attendees were present and dressed to the nines for the runway gala fundraiser on Saturday 7th December for the 4th Annual Officers’ Ball and Fashion Event 2019. “The Make it Happen Foundation” partnered with “Saint Lucia Hot Couture” to deliver a spectacular blended gala experience, featuring several top local and regional designers, a sumptuous menu and amazing musical entertainment; all for a worthy cause.

Upon entry it was visible that the organizers spared no effort in delivering the promised theme of a “Winter Wonderland”.  Hues of whites, silvers and blues flushed evenly throughout the venue while a screen spanning over 60 feet wide established an animated backdrop of continuous snowfall and wintry scenes. The fabricated “snow” on the floor and tables enhanced, captured and sealed the theme.

One of the highlights of the evening was witnessing our Honourable Prime Minister Allen Chastanet grace the catwalk with a suit designed by Anthony Reid for Meiling while being escorted by his daughter Rhyan. Joining the Prime Minister on the runway was Honourable Bradly Felix who visibly transformed on stage changing his hairstyle to complement each outfit he wore as well as Honourable Dominic Fedee. Honourable Leonard ‘Spider’ Montoute also shared the stage with his son Juergen Montoute.  Other local celebrities like Daren Sammy and Pinkley Francis rocked the crowd and donned pieces from both local and regional designers. The police force also had their representation on stage having Sgt. Eldean Henry and Constable Nieki Sonson joining the cast and doing an amazing job ripping the runway.

Roars of applause and cheers filled the room as the fashion extravaganza ensued with each piece demonstrating the unique flair and style of the designers. Mrs. Mae Wayne and her production team featuring with “The Cloth” and Caribbean Next Top Model’s “Richard Young” pulled out all the stops for a fashion show beyond compare. The choice of music, lighting and quick pace created a unique spectacle that captured the hearts and attention of the audience from the moment the show opened.

A significant feature of the ball is encouraging attendees to dress in local designers. It has been established that at each ball the coveted title of “Best Dress” male and female be given. This year famed society and fashion reporter Novia McDonald-Whyte from the Jamaica Observer came down to cover the event and to judge best dressed. Capturing the male Best Dress title was Samuel Agiste and the female Best Dress title went to Hannah Fitz.

The spirit of goodwill, charity and fun was definitely present on the evening – a key feature of this annual event is fundraising through auctions and raffles for some fabulous prizes.

The corporate community made their presence felt as Mrs. Raquel Du Boulay-Chastanet, the producer of the annual event and wife of the Prime Minister, indicated that several companies had assisted to make the venture a success, namely: Brice & Co, Digicel, Tomty Northern Tool Company Ltd, Saint Lucia Distillers, Peter & Co., Caribbean Metals, Sandals Grande, Coco Resorts, Coconut Bay Hotel and Cabot Links. Special thanks was given to HTS, DBS and Hot 7 as they played a pivotal role in advertising and supporting the event.

On the evening there were two spontaneous financial contributions made; each of $10,000 – one by the Galaxy Group, developer of the Honeymoon Beach Hotel project and one by the newly opened Republic Bank. “I am quite moved by the work and effort of the Make It Happen Foundation and as I sat on the table with my colleagues, we made the decision to make this contribution” said the regional manager of Republic Bank Michelle Palmer.

Another focal point of the evening was the honouring of three retired officers for their lifetime of service.   Recipients of the “Lifetime Achievement Award” were ASP. Kim Louis, Superintendent Peter Eudoxie and Chief Fire Officer Mr. Haynes Cyril.  Mrs. Chastanet presented each with the lifetime achievement award from the “Make it Happen Foundation” and a weekend for two at Coconut Bay which they were delighted to receive.

During her address Chairperson and Founder Mrs. Chastanet stated “Our Foundation is honoured to produce the 4th Annual Officers’ Ball which recognizes the efforts of our hard-working police and fire officers whose sacrifices and commitment to service and country inspire us all. If we all work together, we can ensure that they have what they need to carry out their duties in a more efficient and effective manner which ultimately benefits us all.” She continued “I have seen firsthand the difference a little support makes to their lives and the comfort they take in knowing that we as a society value their efforts and their contributions. We are so grateful to all our attendees and to those generous sponsors whose assistance has made this evening possible.”

The Make It Happen Foundation is a non-profit charitable organization founded with the aim of addressing small-scale infrastructural and other financial needs of groups but with a focus on police and firefighters.  Assistance has however also been given to other groups such as the Bordelais Correctional Facility, educational institutions and health facilities.

The Foundation will continue to work with the police force and fire service to lend a hand wherever they can. The Make It Happen Foundation would like to thank all their sponsors, partners, donors and attendees of the 2019 Officers’ Ball for helping to create a truly spectacular event and looks forward to trying to create an even more memorable event for the Officers’ Ball in December 2020.