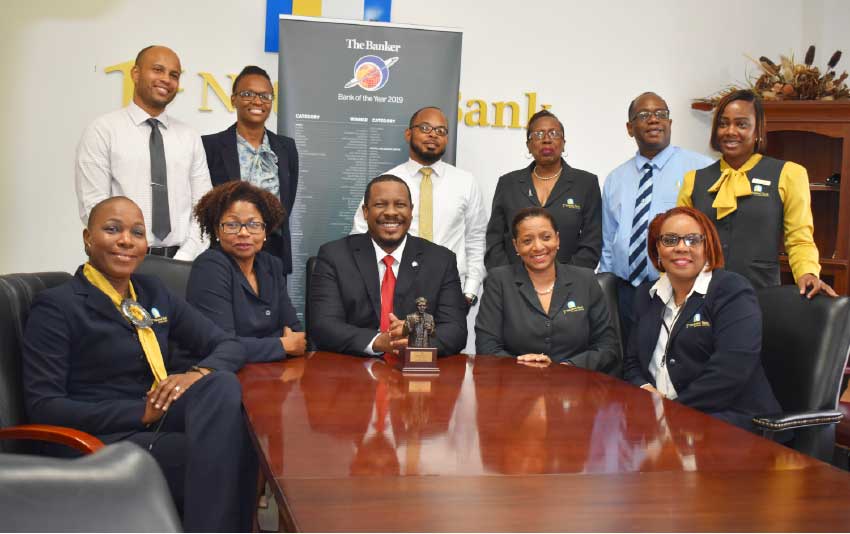 1st National Bank St. Lucia Limited has expressed deep confidence in the potential of Saint Lucians to achieve. ‘The Banker’, which is an internationally-acclaimed financial magazine, recognized 1st National Bank in London on November 28th by awarding it as the “Bracken Bank of the Year”. Regarding this award, Johnathan Johannes, Managing Director of 1st National Bank, said at a press conference this week, “The award that you see here today is testament to the fact that Saint Lucian businesses and Saint Lucian products can go out there and be world’s best.”

He said the bank was inspired by other local companies that continued to excel. On that note, he remarked, “I will give big props to companies like Baron Foods, to companies like Windward and Leeward Brewery, companies like St. Lucia Distillers, who have been going out there in their respective fields and coming back home with gold medals for Saint Lucia. And these companies inspired us to take that bold step.” He also took the opportunity to encourage Saint Lucians to do business with 1st National Bank, which has established itself as a winner among other financial institutions. Johannes further stated that all Saint Lucians should be firm supporters of local businesses. On that note, he remarked, “Many times people think that local is inferior. I want to say to you it is not.”

Prior to winning the ‘Bracken Bank of the Year Award’, 1st National Bank was recognised in 2019 by the Saint Lucia Chamber Awards for ‘Business of the Year’ and ‘Service Excellence of the Year’. Johannes described the Chamber awards as the crowning achievement for 1st National Bank in 2019 where awards were concerned. He said, “Whilst we have won this international award [The Bracken Bank of the Year Award] it takes nothing away from the Chamber Awards that we won, because it’s always good to be recognised at home. Thankfully, we were recognised for the good work that we did in Saint Lucia in the business community here, and it’s only being validated now in the international circles.”

In regards to the quality that has enabled 1st national Bank to make its unique impact in the banking sector, Johannes replied, “We [1st National Bank] were founded based on a few principles. –And one of those guiding principles has always been to advance Saint Lucians, and 1st national Bank has held onto that principle for the last eighty years.” He affirmed that the shareholders, the board, the management team and the employees of the bank were all 100 % Saint Lucian. In reference to this, the Managing Director said, “It is that deep philosophy that we believe Saint Lucia has a lot to offer the world, and we are uniquely creative, enterprising, and we can do things on a world-stage at a world-class level and compete with the best and brightest that is out there.”

Johannes further added, “In our 80th year we embarked on a number of initiatives that would take us back to those principles of benefiting the people of Saint Lucia and celebrating all that is unique about us as a people. The 100 % mortgage finance was again an initiative to benefit Saint Lucians who wanted to move from renters to home-owners.” He said 1st National Bank was driven to help saint Lucians by giving them the opportunities to generate their own wealth. The 100 % mortgage finance which the bank offered to customers was a benefit to the entire economy as they provided revenue for contractors, builders, retailers, lawyers and more.

Johannes did mention however, that there were many young people who preferred to rent as opposed to owning a home. To these young people, he remarked, “Renting your entire life creates wealth for somebody. If you’re not creating wealth for yourself then you are doing a disservice to yourself. So I would encourage young people to do the analysis, to do the math and see whether it makes sense to own and whether they are in a position to own, –because owning a property is your first step to creating wealth for yourself.”

Johannes stated further, “Think of it as a business investment as opposed to the sentimental value that we tend to attach to ‘my home’.” He said that people should regard home ownership as a pure investment in which they would pay a mortgage on a property that will their own some day, and one that they can sell when the value goes up, instead of paying rent for a property that will never become their own. He further stressed, “I encourage young people to do that [invest in their own home] and not continue to enrich others, but think of how they can enrich themselves.”