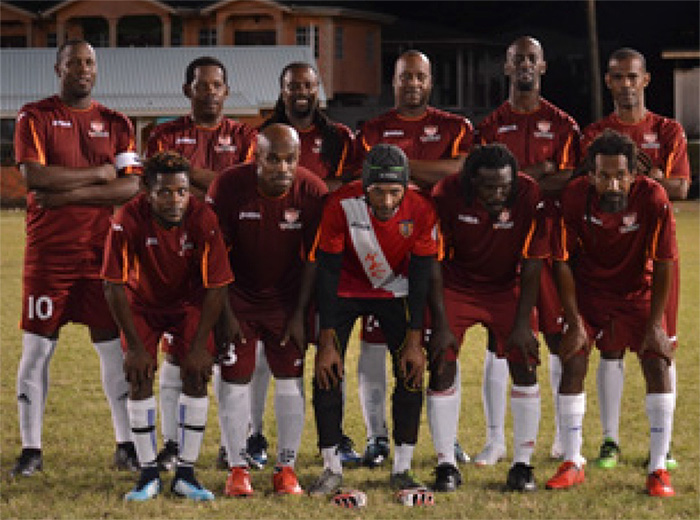 FOLLOWING a one day break today from the tournament schedule to allow Saint Lucia’s football enthusiasts to go out and support the Saint Lucia National Men’s Senior Football Team in their match against the Dominican Republic in the CONCACAF Nations League tournament, the Veterans in Sports Inc. (VISI) showpiece continues tomorrow (Sunday 17 November) with four matches at the Phillip Marcellin Grounds (PMG) in Vieux Fort.

From 2.00 p.m. in Game 1, Anse la Raye and Vieux Fort North will kick off their campaign against each other.

From 6.00 p.m. Laborie Veterans with 3 points already in the bag following their 4-0 win over defending champions Micoud, will be playing Valley Legends who drew their opening game 2 -2 against Canaries.

The final game of the evening will see Vieux Fort South (VFS) playing against Labowie Connextions. VFS will to want to make amends following their 5-0 drubbing at the hands of Flow Lancers FC; but their neighbours Labowie Connextions are expected to come out firing at VFS.

On Wednesday evening in a double header played at the Gros Islet Playing Field; in game 1, Marchand Veterans continue their winning ways in Group C, defeating a much improved Congorians veterans team 2 -1. For Marchand the goal scorers were No. 8 Marlon Desir via the penalty spot in the 4th minute and No. 7 former national striker Michael Jn Baptiste in the 47th minute.

For Congorians, the lone goal was scored by No. 7 Faustin Joseph.

In the second encounter, home team Gros Islet veterans had a hard fought 2 -0 win over Prophets and Kings (PAK). For Gros Islet, the goal scorers were No.13 Everton Regis in the 13th minute and No. 14 Ian Thomas in the 55th minute.

PAK, looking back at their performance on the pitch would have themselves to blame for not putting away the many scoring opportunities offered to them, while Gros Islet despite winning the encounter 2 -0 can count their blessings as they were not clinical throughout the match as they squandered eight scoring opportunities.

Following the final game the VOICE spoke to CEO of Veterans in Sports Inc. Alvin Malaykhan about the quality of play on the night. He responded: “Great Wednesday match ups, Marchand Veterans are off to a great start in Group C, two games 6 points. This year Congorians looked better organized and they too had their chances. The goal scored by Faustin Joseph is the most spectacular goal scored for the season so far.”

He continued, “Gros Islet, they too are off to a great start although they were not clinical playing at home; on the other hand Prophets and Kings looked composed and kept the pressure on a fast paced Gros Islet team. The 90 minutes on the pitch was really exciting and of high intensity.”

Malaykhan added, “We have a break on Saturday, VISI will be out to support team Saint Lucia, so I am appealing to the Veterans Football Fraternity and Saint Lucian sports fans to come out in large numbers to support our national team as they battle against the Dominican Republic at the DSCG.”

“In terms of this weekend, games are off today, but tomorrow (Sunday 17th) patrons will be treated with four exciting games as the action kicks off from 2.00 p.m.,” he noted.