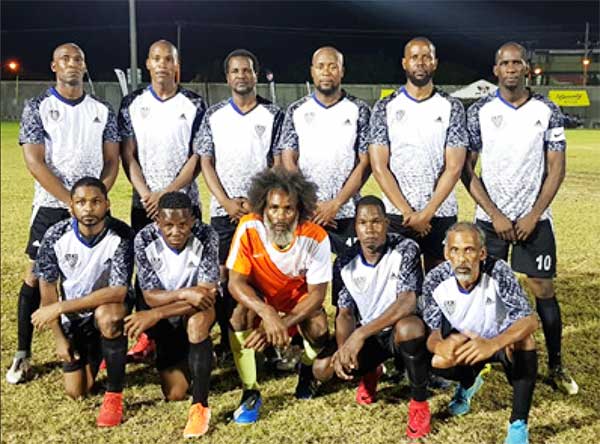 WITH the theme ‘Strong to Finish’ the 2019 Veterans In Sports Inc. Football Tournament kicked off at the Phillip Marcellin Grounds (PMG) in Vieux Fort with two triple headers this past weekend. The high of this weekend’s showpiece was a total of 24 goals being scored with last year’s finalist Flow Lancers FC starting on a winning note and defending champions Micoud Veterans going down to Laborie Veterans.

There were also wins for Marchand Veterans, All Blacks – Dennery and Central Vieux Fort, while Valley Legends and Canaries Veterans each collected 1 point for their drawn game.

On Saturday 9th, Game 1, Marchand Veterans defeated Choiseul Veterans 4 – 1. For Marchand the goal scorers were No. 9 Cleo Desir in the 11th minute, No. 16 Darnell Poyotte in the 60th minute, No.8 Marlon Desir in the 70th and No.5 Neville Harris in the 83rd minute.

For Choiseul Veterans, the lone goal was scored by No. 5 Desmond Alfred in the 77th minute.

Game 2, All Blacks – Dennery had the better of Mon Repos Sharks 2 – 0. For All Blacks, the goal scorers were No. 7 Franklyn Dupigny in the 23rd minute and No.10 Mogabi Polius, via the penalty spot, in the 71st minute.

In the final match of the evening, last year’s finalist, Flow Lancers drubbed Vieux Fort South (VFS) 5 – 0. For Flow Lancers FC, the goal scorers were No.17 Wendell Prescott in the 1st and 4th minutes; No.23 Gabriel John in the 39th minute; No 9 Claudius Amedee in the 55th minute and No. 11 Johnathan John in the 83rd minute.

On Sunday 10th, Game 1, Valley Legends and Canaries Veterans played to a 2-2 draw. For Canaries the goal scorers were No. 17 Shawn St Omer in the 14th minute and No. 19 Stephen Octave, via the penalty spot, in the 62nd minute.

In Game 2, last year’s Plate Champions Laborie Veterans defeated defending champions Micoud Veterans 4 – 0. For Laborie Veterans, goals came from No. 22 Don Tommy in the 13th and 67 minutes; No. 19 Julius Mentor in the 27th minute and No. 8 KentisAuguste in the 58th minute.

In the final game on the evening, Central Vieux Fort (CVF) had the better of VSADC 3 – 1. For CVF, the goal scorers were No. 7 Sheldon Mark in the 1st minute; No. 2 Joel Charles in the 53rd minute and No.4 Lynton Sandiford in the 70th minute.

For VSADC, No.6 Sean Kirton scored in the 24th minute.

The VOICE spoke to Veterans In Sports Inc. CEO Alvin Malaykhan about the first two days of competition.

“We are off to an excellent start,” he noted. “Teams that impressed me the most were Flow Lancers FC and Laborie Veterans.”

According to the CEO, “There were not too many surprises, but the Laborie Veterans, last year’s Plate Champions, looked very young and impressive when they came up against the Gold Cup champions Micoud.”