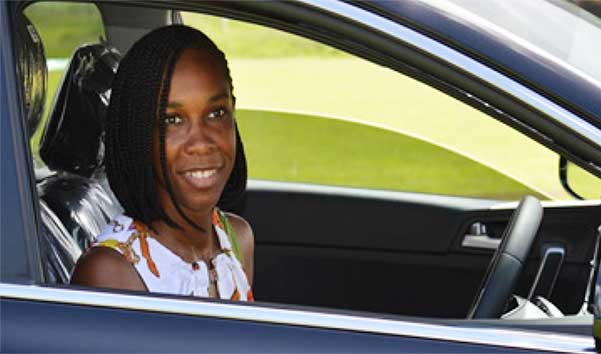 SAINT Lucia’s most decorated athlete of all time, multiple Sportswoman of the Year and World rated high jumper Levern Spencer was all smiles on Tuesday morning at the Mindoo Phillip Park (MPP), the same venue where her athletic career started over 20 years ago.

This time around Levern was not in competition attire in search of another gold medal; rather, her presence had to do with her being gifted a brand new 2019 Kia Sportage from the Government of Saint Lucia in collaboration with Northwest Limited, the local agent for Kia.

Permanent Secretary in the Ministry of Youth Development and Sports, Benson Emile, said, “The Government of Saint Lucia in partnership with a generous corporate citizen, Northwest Limited, will present to Levern Spencer a 2019 Kia Sportage for her long standing service to Saint Lucia in sports.”

He added, “Saint Lucia appreciates the dedication and consistency of service which Levern has provided in her chosen field of representation, which is athletics. We appreciate the high moral standard she has maintained in representing us. This is why the Government of Saint Lucia has named Levern a Sports Ambassador. It is also for this reason that Northwest Limited is comfortable with associating Levern with their brand.”

Northwest representative, Larry Bain said, “Levern Spencer has demonstrated to the world what dedication, discipline and determination can achieve, but more importantly, Levern has shown every young Saint Lucian, particularly every little girl with a big dream, that if they can truly focus and put in the hard work, they too can realise anything.”

He added, “Levern started out just as Kia had as the unknown, competing with more experienced competitors with greater resources and just like Kia, with persistence, perseverance and passion. Levern has risen to be measured against the very best in the world. Levern, you have cleared more than the high jump bar; time and again you have elevated the bar for all sports persons competing in other disciplines. Saint Lucians from all walks of life and citizens from across the world have witnessed not only your incredible consistency on the field, but also how you have carried yourself throughout your remarkable journey”.

Bain said, “We are enormously proud and honoured to partner with you and your team. We’re confident the Kia Sportage is a perfect fit to help carry you through to achieving future milestones, and we look forward to a long and successful partnership.”

Sports Minister, Edmund Estaphane, who also started his athletic career at the MPP running the 100 and 200 metres in the early 80s in addressing the small gathering said, “At a ceremony to recognize 20 years of dedicated, stellar and long standing service in the area of national sports representation, which remarkably coincided with the 40th independence anniversary of Saint Lucia, the Government of Saint Lucia made some pronouncements with respect to rewarding Levern for her meritorious service in sports.”

According to the Minister, “I must report that Levern has been declared a Sports and Youth Ambassador for Saint Lucia and as a result has been granted a diplomatic passport in order that she be given the privileges that such a document dictates when she travels around the world to represent Saint Lucia. The Ministry in due course will present a policy to the cabinet of Ministers for consideration in defining the rights, privileges and responsibilities of a sports ambassador.”

Estaphane said, “The process of issuing a commemorative stamp in Levern’s honour is well advanced and very shortly this promise will be fulfilled.”

In the words of the minister, the occasion at the MPP was to fulfill one other promise made to Levern – the presentation of a new vehicle.

“Levern, you have been and continue to be our shining light,” the Minister added. “Your dedication, humility, perseverance and ethos epitomize the characteristic that all Saint Lucians must aspire to for Saint Lucia to shine. As such our presentation of this vehicle to you is a small token of our appreciation for your example to this nation.

“The government of Saint Lucia in partnership with long standing corporate citizen, Northwest Limited makes this presentation to you in appreciation of your endurance, your athletic accomplishments and the humility you have displayed throughout.”

The Minister thanked Northwest Limited for donating the SUV to Levern. He said, “You are demonstrating a positive characteristic required for strong sustained nation building, that is recognition and appreciation of the achievements and exploits of others. The Government of Saint Lucia expresses our thanks and wishes you well.”

When she spoke Levern thanked the Government of Saint Lucia through the Ministry of Youth Development and Sports, “for providing me this vehicle in recognition of many years of service to Saint Lucia as an athlete.”

Levern’s local manager, Gregory Dickson came in for high praise. “He has been on the ground and always having discussions with the ministry especially when I am off island, and I know most of this could not have happened without him. Thank you Pastor Charles for blessing the vehicle, it is something that’s very important; Larry Bain for your contribution towards this car and suggesting it with Liota, it’s a great option. Kia Sportage, it will be one of my favourite brands, it has a lot of features. I really like it and look forward to driving it and advertising Kia,” noted Spencer.