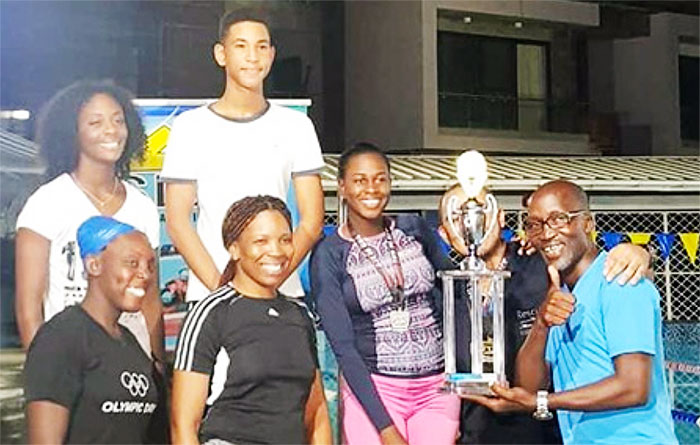 With a start time of approximately 7.30 p.m. the meet commenced with a March Pass. Teams were clad in their company’s colors with Sandals making a grand appearance and introduction of their mascot for the competition.

The RHAC came alive with competitive swimming between the different team employees and in some cases, assistance from select club swimmers.

Points were awarded for all events with additional prizes being awarded to Team Sandals for the Best Dressed Team, team with the most supporters and best mascot. Team Teachers received the prize for the Loudest Cheering Team.

Sterling recognition of swimmers in the Masters’ competition went to David Moyston and Jeannot Walters Snr who both represented Team Lawyers. They both performed with enthusiasm and youthful resilience.

At the end of the evening the emerging champions of the Inter Commercial Swim Meet was Team Sandals led by Vernessa Eugene with 183 points, Team Teachers led by Wayne Benti took the 2nd place with 156 points followed by Team Soufriere Foundation led by Felicia Clauzelma and Shani Mesmain with 101 points.

Fund Raising Officer Diane Mauricette expressed her satisfaction with the commitment from the commercial houses and looks forward to a greater participation in 2020.

The Federation continues to be humbled by the support from Corporate Saint Lucia and says it is forever grateful whenever they come on board either in an event such as the Inter Commercial Swim Meet or through supporting swimmers on their various journeys to compete regionally and internationally.