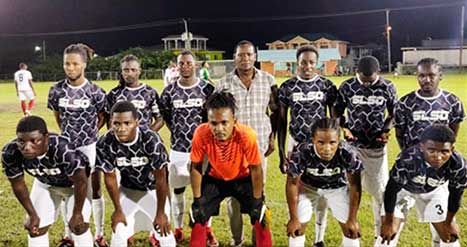 From 6.00 p.m. in front of an appreciative crowd of football fans, in the first match played in this year’s competition, Saint Lucia Sports Online (SLSO) Monchy, United FC and Twist Dominators FC played to a 2 – 2.

Goals for Dominators were registered by Lyndon St Juste in the 32nd minute and Kwan Charlery in the 48th minute.

For SLSO Monchy, the goal scorers were Everton Lambert in the 52nd minute and Kenwin McPhee in the 59th minute. .

Northern United FC got their goals from an own goal by Liam Bonair in the 9th minute and Selwyn Boyce in the 90th minute.

In the process Ed William registered the tournament’s first hat trick with goals in the 67th 78th and 82nd minutes.

The other goals were scored by J. Abraham in the 18th minute and Lenny Alcide in the 75th minute.

The tournament continued last evening from 6.00 p.m. with two matches at the Gros Islet Playing Field. In game No. 1, Flames United out of Marchand, one of two teams invited to take part in this year’s tournament, took on Northern Young Stars; while in the most talked about encounter during the launch which was held last week, defending champions Monchy played Police at 8.00 p.m.