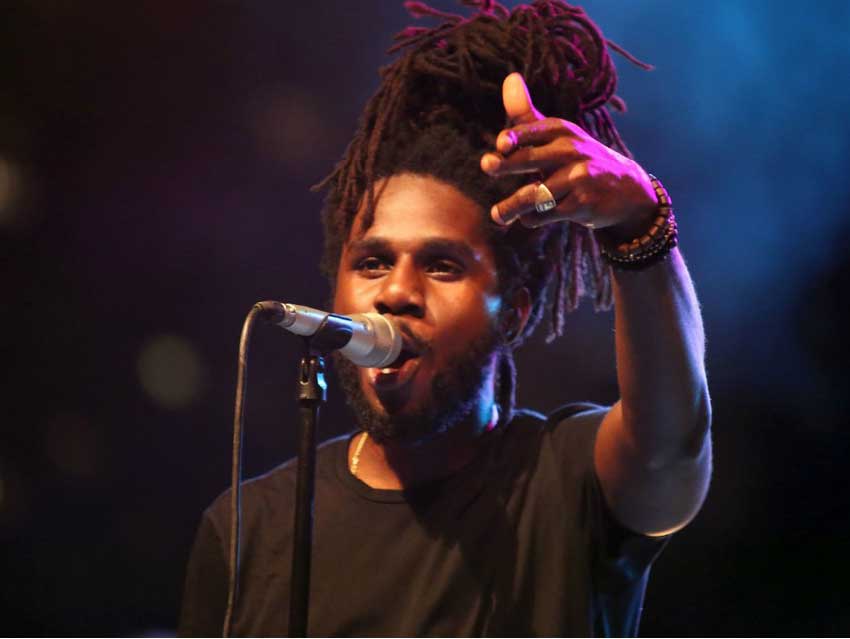 ON Tuesday October 22, 2019, Golden Events held the official press launch for Unity Fest 2019 at the Bay Gardens Beach Resort & Spa. Unity Fest will be headlined by Reggae Superstar Chronixx on Saturday December 14th at the Daren Sammy Cricket Ground in Beausejour. According to promotors, the venue will serve as an oasis of love, peace and unity with the sweet sounds of Caribbean music for Unity Fest.

“As an entertainment and lifestyle company, one of our top priorities is to provide avenues for moments of celebration that can serve as stress relievers for our patrons,” the Golden Events group said via a press statement. “We have been hearing the names of artistes Saint Lucians would like to see and Chronixx was on top of that list and so we felt that coming to the end of Saint Lucia’s year-long celebration of 40 years of Independence, Unity Fest featuring Chronixx and a number of other regional and Saint Lucian acts would be quite fitting.”

Chronixx who is from Spanish Town, St Catherine, Jamaica, is one of the most sought after Jamaican acts and has been on a whirlwind tour over the past year, coming out of his 2018 Grammy Nomination.

His music has been branded as a “Reggae Revival,” – his lyrical content revolving around themes of anti-war, romantic declarations and resilience.

His EP, ‘Dread & Terrible’, was released in 2014, and topped the Billboard Top Reggae Albums chart, the week of April 18 that year. It featured hits like “Here Comes Trouble”, “Like a Whistle” and others. Prior to that, Chronixx had already dropped a slew of popular singles including “Smile,” and “Ain’t No Giving In.”

Chronixx also made history in 2018, as the first and only Reggae artiste to appear on Rolling Stone’s prestigious annual Best Albums list in recent years.

About his music and lyrical flow Chronixx says; “Everything in life is music you know. When music overcomes you, it’s now left to what you feel yourself, and how able you are to physically channel this music. How are your lungs? How is your heart? How is your mind… all of that comes out in the lyrics. As an artiste you are the music that you make.”

Unity Fest will also feature Zouk, Compas and R&B singer Oswald Clerveus out of St Martin, Vayb from Haiti ft. MickaelGuirand of the group Carimi and popular Jamaican sing-jay Agent Sasco (formerly Assassin) with hits like “Almighty Protect Me”, “Something Gotta Give,” “Winning Right Now,” and many more under his belt.

The ever popular DYP and friends from Saint Lucia will be bringing their party energy to the Unity Fest stage as well as DJs Litchie Sounds and Hollywood HP, with more featured guest DJs and artistes to be announced.

Unity Fest also has a brunch component. LIV- is an all-inclusive upscale brunch at the luxurious Bay Gardens Beach Resort & Spa in Rodney Bay. The event will include meet and greet sessions with various artistes, as well as opportunities to have autographs signed. The brunch event starts at 1 p.m., with a price tag of EC$200 inclusive of the after-party. Ask about the Unity Fest combo, which includes brunch, Unity Fest, and the after-party.

Advanced tickets for Unity Fest cost EC$100 (General EC$120). You can also reserve cabanas, tables, or get into the GE lounge. For more information email: unitygoldenevents@gmail.com.