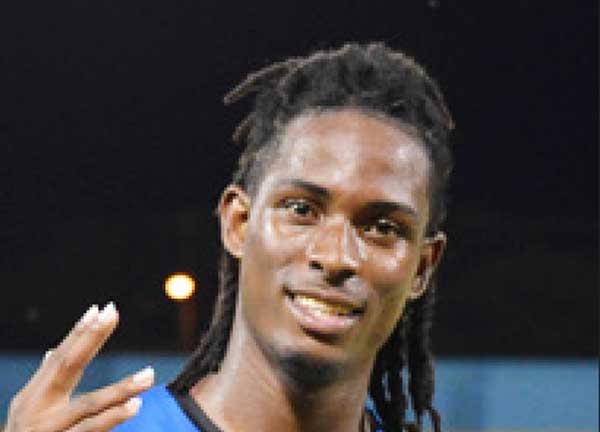 SAINT Lucia secured their first win in the CONCACAF Nations League Group B encounter on Saturday evening when they defeated FIFA’s No.153 ranked team in the world, the Dominican Republic, 1 – 0. The goal was scored by No. 9 Antonio Joseph in the 38th minute to keep Saint Lucia’s hopes alive of remaining in Group B.

Despite a disappointing crowd turnout of at least 672 paid patrons, from the first whistle of referee Jaime Herrera of El Salvador, the Saint Lucia team started showing the urgency by applying pressure on the Dominican Republic’s defense. Fortunately for them, No. 2 Ernesto Trinidad was able to clear a ball on the goal line to deny Saint Lucia an early lead and in the process allowing the Dominican Republic team to breathe a sigh of relief in the 7th minute of play.

Up until then it was all Saint Lucia as they continued to search for the opening goal. Their perseverance and exploits finally paid off when No. 17 Chaim Roserie (forward) was able to pass a free ball to No. 9, Antonio Joseph, (forward) who fired past the Dominican Republic goalkeeper and captain Miguel Lloyd to his right to give the home team a 1 – 0 advantage heading into the halftime break.

On the resumption, it was a different ball game altogether as the Dominican Republic team came out firing; Saint Lucia No. 17 Chaim Roserie had to leave the pitch following an injury he sustained. Roserie was replaced by No. 21 Aaron Richards and Saint Lucia was still able to create a number of scoring opportunities.

The pendulum shifted as the Dominican Republic never for once allowed their shoulders to drop and in the 67th minute came very close to equalizing another opportunity that was missed seconds later thanks to Saint Lucia’s goalkeeper, Lamar Joseph, who came up with a big save on the night.

“What we saw on the square was a team that raised their game against a more superior opponent and were able to come out with a win,” said Head Coach for the Saint Lucia team Jamaal Shabazz following the encounter. “For me I won’t go around doing cart wheels, because we can see there is so much work to be done. We must commend the players for the effort and sticking to the task tactically and with the two English based players, Lamar Joseph and Kieron Monlouis, both did very well.”

“Lamar Joseph (goalkeeper) has sense of calm under pressure, we needed that on the night because for long periods we were under pressure because the Dominican Republic threw everything at us and when you look at the game you can see this is a superior team for us but how many times have a small army defeated a big army by the grace of God. I got to give credit to the players, they never stopped believing and eventually they took it to the end.”

In terms of the starting lineup and composition which showed an attacking flare against the Dominican Republic, Shabazz said, “Because we have so many players based overseas we have to select the team even before the start of the camp. We try to organize knowing full well we are playing home, we went with natural wingers. Young ChaimRoserie worked like a step father in the first half, come the second half there was nothing left in the tank, he gave all that he could give; Andrus Remy also worked very hard.