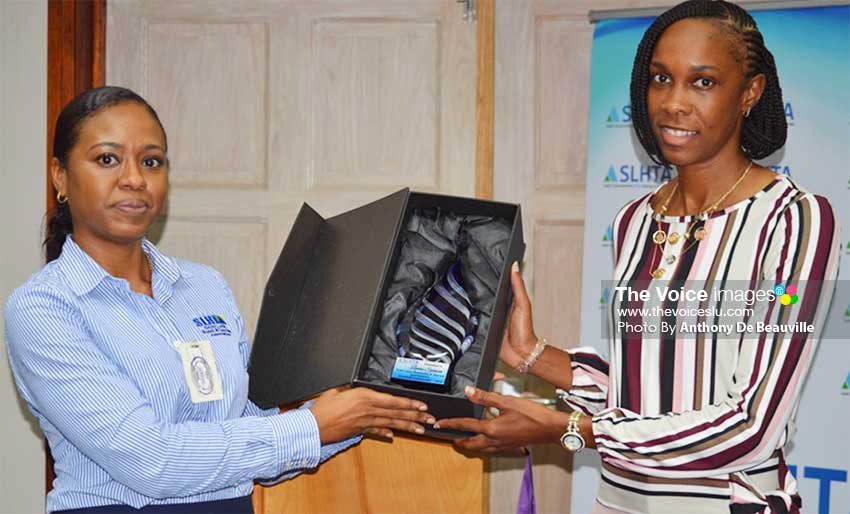 The brief ceremony took place on Monday 21st October 2019 at the Hewanorra International Airport (HIA) VIP Lounge to welcome and bestow this prestigious honour on the world ranked athlete.

Present were staff of the SLHTA including members of the Board of Directors; Permanent Secretary in the Ministry of Youth Development and Sports, Benson Emile; Deputy Permanent Secretary in the Ministry of Tourism, Information and Broadcasting, Culture and Creative Industries Suzette Jean; Saint Lucia Olympic Committee representative, Ryan O’ Brian; Saint Lucia Athletics Association representative, Andy Behl; Levern Spencer’s immediate family and manager, and members of the media.

In her welcome remarks, Mistress of Ceremonies, Finance and Administration Officer at the SLHTA Yola St Jour said, “The SLHTA truly believes Spencer to be “an absolute jewel and phenomenal daughter of the soil.”

She added, “At the SLHTA’s 55th Annual General Meeting, Levern was inducted as the SLHTA Goodwill Ambassador; she was selected based on her humility, dedication and persevering spirit and knowing that she would be the perfect asset to carrying out the mandate of the SLHTA.”

SLHTA Board of Directors representative Kirt Elliott said he felt honoured on behalf of the President of the SLHTA, Karolin Troubetzkoy, Directors, and also the general membership to welcome Levern Spencer back home.

Elliott said, “For many years I have heard the name Levern Spencer and today is the first time I am actually seeing and meeting her. One of the things that strike me is her gentleness and humility, which I think truly embodies us as a people.”

He added, “At its 55th Annual General Meeting held recently, the SLHTA unequivocally decided that Ms Spencer was the perfect embodiment of a Goodwill Ambassador… and I am happy to announce that she is the first such ambassador. Over the next year the SLHTA looks forward to working with Levern at publicity events to really share some of the essence of who she is and what she represents with the broader Saint Lucia in terms of empowerment, fundraisers and seeking avenues in which to inject those funds for the betterment of Saint Lucia.”

Permanent Secretary in the Ministry of Youth Development and Sports, Benson Emile congratulated Spencer on her achievement and thanked the SLHTA for recognizing sports and accomplishments more specifically; Levern’s sporting record as something worthy of celebrating and honouring.

“Your presence on the island always brings a buzz of excitement, national pride, and national accomplishment that only you have fulfilled, but as a nation we all partake in,” he said. “Your sporting exploits and achievement are well documented and celebrated. We as a nation also share your emotions when your performance does not get you to the podium, but we, and probably like you, take comfort in the fact that we know that you have tried your best.”

Deputy Permanent Secretary from the Ministry of Tourism, Information and Broadcasting, Culture and Creative Industries Suzette Jean said, “On behalf of Honourable Dominic Fedee, let me take this opportunity to congratulate you, Levern, on winning yet another gold medal at the recently held Pan Am Games in Lima, Peru. Another one added to your collection with a story to tell for each. I feel very privileged to be here and to be part of this welcoming ceremony where we get to honour your accomplishment yet again.”

Levern, you are a true jewel, a phenomenal daughter of the soil and an inspiration to young people everywhere. You represent what every young person should aspire to and that is, achieving success through hard work and dedication in whatever field is chosen. Your personality and pleasant disposition also keep you humble, focused and disciplined.”

Additionally, “Sports can undoubtedly create opportunities for our youth to gain meaningful employment and to engage in positive activities that will ward off crime and social ills. The Government of Saint Lucia recognizes the nexus between investing in sports development and the growth of various sectors of the economy, particularly tourism. Sports tourism has the potential to bring visitors and other sporting enthusiasts to our shores to fill our hotel rooms, provide income for workers employed at all levels in the industry and to provide foreign exchange. It is therefore critical that every effort is made to provide the enabling environment to grow and support sports in Saint Lucia.”

In thanking the SLHTA for inducting her as their Goodwill Ambassador, Levern said, “It is as usual an unbelievable feeling to again step on home soil, but I will sum up that feeling by saying, truly, there is no place like home.”

She added, “I feel honoured, and I am truly touched by this heartwarming event put on for me by the SLHTA. Thank you very much SLHTA for this special touch, and thanks to all those who found it fitting to attend. I feel even more honoured by the wonderful gesture of making me your first ever Goodwill Ambassador, something I will forever hold in high esteem.”

“When my local manager, Gregory Dickson first informed me of this decision, my initial reaction was one of surprise and curiosity in terms of this partnership, but knowing that the SLHTA has been and still is a well-respected organization in Saint Lucia and the wider region, I knew it was going to be an exciting relationship working with you,” Levern said. “I have since then been further briefed on what this appointment is all about, and so I eagerly look forward to the upcoming months and hopefully years of partnering with you. Having just ended another challenging track and field season, I want to say heartfelt thanks to the many persons and organizations without whose support the year would have been even more challenging.

“By now it is well documented that my local manager, Mr Dickson’s reliable support has been unwavering for the past 20 years and counting, but the support of my family, the Government of Saint Lucia, the Saint Lucia Olympic Committee Inc., the Saint Lucia Athletics Association, sponsors and the people of Saint Lucia, continues to push me on towards my goals and aspirations. Without your support, I would not have been able to give this country 20 years of representation, so to all of you I say a big thank you. I’m happy that the media is here as well because they too have played a role in my success over the years.

“This season was by no means my best in terms of performance, but by no means was it my worst. However, it was probably my worst in terms of niggling injuries which in many instances affected my performance. But with the help of God I was able to survive it and end the year having won some professional competitions in Europe, and for the 8th consecutive time from 2005, I was able to represent my country at the prestigious World Championships which was this year held in Doha (ker-ta) Qatar. Though I ended just one place outside of the 12 finalists, I count it a privilege to have been named among the best in the world.

Without a doubt, Levern said this year’s crowning moment was in Lima, Peru where she defended her title of Pan Am Champion.

“This is a title I had won four years ago in Toronto, Canada, giving Saint Lucia its first ever Pan Am gold medal,” she said. “It is therefore, as you would imagine, an even more satisfying feeling winning our second gold medal at this major competition held every four years.”