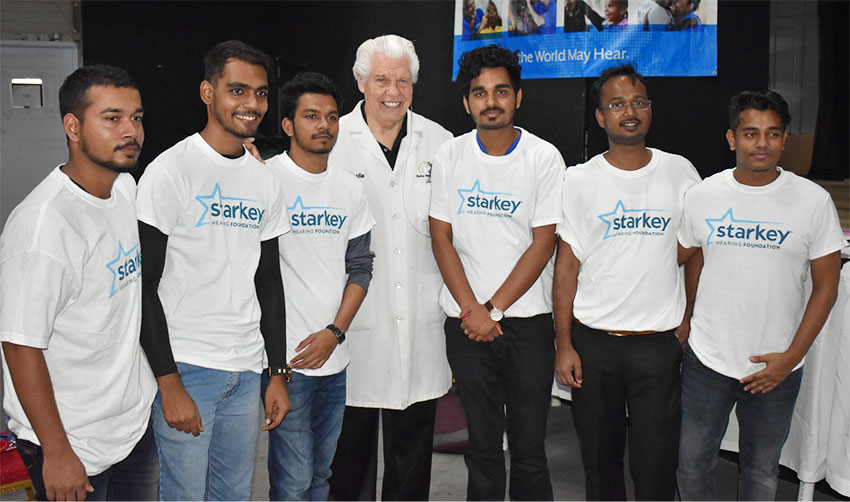 A NUMBER of Saint Lucians were screened and fitted with hearing aids throughout the course of Monday October 14th at the National Cultural Centre. This exercise came at no cost to persons and was part of the National Hearing Mission which was organised by the Starkey Hearing Foundation in collaboration with the Department of Health and Wellness. The mission started on Sunday October 13th and will end on Wednesday October 16th. Screenings were performed on the 13th, while the fitting of hearing aids was done on the 14th. Aftercare checkups will be performed today (October 15th) and tomorrow (October 16th).

Twelve students from the American International Medical University (AIMU), Gros Islet, volunteered their services in addition to the local volunteers who were working with the mission. It was not yet known by the time of this report how many Saint Lucians benefited from the hearing mission this year, but the mission was reported to have been well supported by members of the public. The Starkey Hearing Foundation, which was officially founded in 1984, has been coming to Saint Lucia for the past 15 years. The Foundation was started by billionaire William F. Austin, the owner of Starkey Hearing Technologies.

Austin, who was actively involved in the activities of the mission, could be seen performing the installation of hearing aids at the National Cultural Centre on Monday October 14th. While attending to someone, Austin, who has been involved in the hearing aid business for over 50 years, took a brief moment to say, “If I didn’t feel really good about doing this I wouldn’t do it. I do it because I want to; I do it because I’m useful. I can make a difference in the lives of some people that need a hand, that need a friend, and I believe it’s my responsibility to do what I can to help others.”

The seventy-seven-year-old Austin described himself as a full-time missionary as he has been engaged in this humanitarian effort since 1961. He further stated, “In Saint Lucia you have a problem with hearing but that’s pretty much everywhere in the world. It’s common and people don’t know what to do about it or how to get help, and that’s where we come in. We try to come and provide that expertise, to restore the hearing as much as we can for the person… give them connection to life.”

The mission recently took place in other islands such as Saint Vincent and Grenada. After its departure from Saint Lucia the Starkey Hearing Foundation will continue its mission around the world from Minneapolis, USA to Mexico; the South Pacific; the Philippines and from East to West Africa. Austin, who emphasised his passion for the mission, further stated, “I take a break at Christmas, I take no other break; I don’t take a break for Thanksgiving or any other holiday including Labour Day. I only take a Christmas break.”