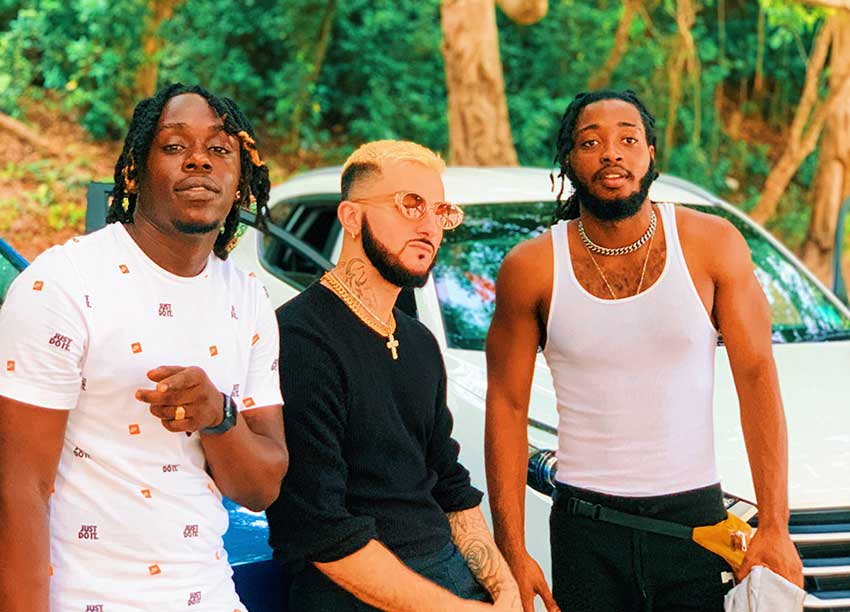 October 22nd, 2019(Gros Islet, St. Lucia) – LMG Records announces the release of a double-feature; two (2) unique tracks entitled “Movay” & “China”, a creative collaboration between St. Lucia’s own Lu City. & Blackboy. This epic collaboration blends the mainstream appeal of Lu City with Blackboy’s mastery of the Dennery Segment genre. These releases come on the eve of St. Lucia’s Creole Day and are set to be instant classics that are sure to carry through to the holiday and into the 2020 carnival season.

Sexy. Versatile. Star-power.  Just some of the words used to describe St. Lucia’s up and coming stars Lu City. The duo have long been releasing a range of hit songs and doing collaborations with hit-makers like Machel Montano, Grammy-nominated song-bird Shontelle & Nigerian superstar Reekado Banksto positive acclaim. The latest releases see Lu City collaborating with another home-grown St. Lucian talent; Blackboy. Known for hits like “Fire”, “By Cout Tet” and his most recent feature on “Big Ride”,Blackboy is a prolific and talented Dennery segment artist with immense lyrical skill and who incorporates heavy use of Creole into his music. Blackboy isn’t willing to be typecast as just a Dennery Segment artist.Eager to showcase his range and versatility, both collaborations allow him to do just that.

Both Lu City & Blackboy have been consistently pumping out hit after hit over the past few years to an ever-growing fan base. This time around they’ve chosen to pump their versatility up a notch, fusing smoothness and mainstream flavour with a heavy Dennery base line that’s sure to tantalize.

“Movay”(Lu City feat. Blackboy), features smooth zouk & afro melodies overlaid with suave lyrical fusion of both English and Creole – a strong tribute to the richness of St. Lucia’s culture. “China”, (Blackboy feat. Lu City) is sure to be an instant crowd favourite with simple yet memorable lyrics and features the heavy, consistent base line that Dennery Segment is known for. The stark contrast between the vibe of these 2 tracks goes to prove the versatility of both artistes.

“Lu City’s dynamic range and versatility is unmatched; pop one moment, afro-beats the next and now they bring it back to their St. Lucian roots by joining forces with Blackboy. This collab is unique and reflects the diversity & talent we have in St. Lucia.” said LMG Executive Producer Eliot H. Bailey. “They say you should give the people what they want but sometimes you have to show the people something new, something they won’t want to live without,” he continued.

The collaboration brought two artistes, two sounds and two production teams together; “Movay”produced by The Busy Twist and “China” produced by Natoxie. The gruelling hours spent in the studio were doubly so for Lu City’s Shaquille ‘Delete’ Wilson not only recorded, mixed & mastered both tracks but is also the master-mind behind the beat for “WET (Worth Everything)”, “Starting Over”, “Sa Ka Fete” and a slew of other unreleased Lu City productions.

“China” & “Movay” are out now and are available on all major platforms. Continue to stay tuned to the groups website and instagram page for information on tour dates and new releases.