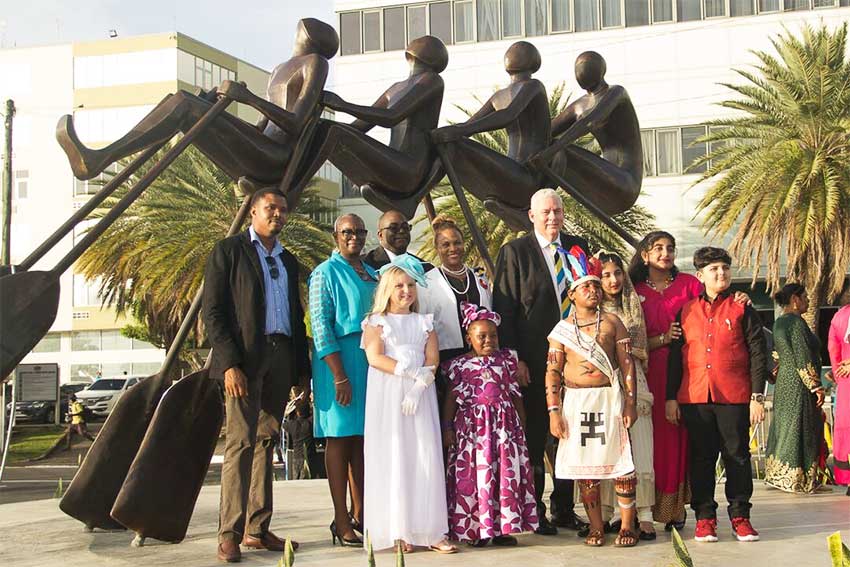 Press Release — The roundabout on the Castries Waterfront looked very different to Saint Lucians heading to the city on Friday morning as it now features a Saint Lucian treasure: the “All-In” sculpture to commemorate our nation’s 40th Independence Anniversary.

The official revealing took place on the afternoon of October 3rd at a brief ceremony which featured a cultural theatrical presentation highlighting Saint Lucia’s ethnic composition; The Amerindians, Europeans, Africans and East Indians. In true essence to the theme of monument and the independence celebrations for this year, four young children representing each ethnic group came together to unveil this new national symbol which will adorn the City for generations to come. The children were accompanied by The Mayor of Castries Peterson Francis. This momentous occasion forms part of the year-long celebration of Saint Lucia’s 40th Year of Independence under the theme “All In- Our Journey Our Future” which focuses on celebrating our vast achievements in education, culture, sports and agriculture over the preceding decades.

The gravity defying bronze “All In” sculpture stands approximately at twelve feet six inches tall and nineteen feet wide.  Created by our internationally renowned master sculptor son of the soil, JallimEudovic, the monument took about three months to complete.

Speaking at the unveiling, Eudovic says this piece was created to appear heavenly and to symbolize the heights of our dreams and achievements as a nation. It embodies the ideals of unity that when we come together we become the vessel ourselves, the machinery and the movement.

“All In” also captures our historical and cultural story as it represents the four ethnicities that make up the composition of our citizenry and the fact that we all came by boat.

According to JallimEudovic: “Time has unified us all. We are no longer slaves or colonizers or indentured laborers, we are one nation and one people. We now sail back into the world in collective stride, the cargo – our culture, heritage and the mighty people who now work from the helm.”

At the ceremony, Prime Minister Honourable Allen Chastanet, called on Saint Lucians to recognize their greatness.

“There is simply no stopping what we can achieve as Saint Lucians. It is also the reason that this government continues to call on Saint Lucians to rise up and take control of our destiny, to feel so inspired by the achievements of our outstanding sons and daughters that we begin to change course in our habits, attitudes and thinking and commit to higher principles and ideals of responsibility for our national development.”

The Prime Minister went on to state: “The decision to install the monument on this site was strategic. This is one of the main entrances into the capital from the north. Right on our waterfront, for all to see.  It will be viewed by Saint Lucians and visitors every day as a symbol of our togetherness. Monuments withstand the test of time, outlive their creators and tell the people of a country what was important to their culture that needed to be memorialized.”

The Prime Minister ended with a call to all Saint Lucians to be all in.