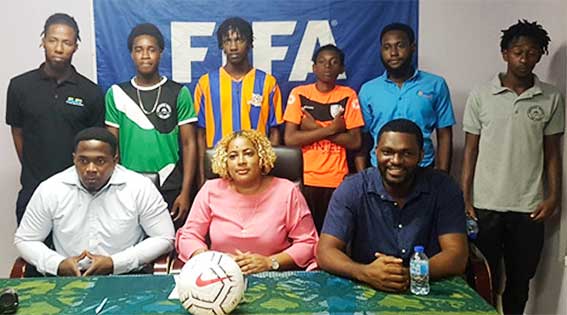 In terms of the format, the tournament is round robin in nature with the top two teams advancing to the semifinals and finals.

In his welcome remarks, GIFL 1st Vice President Charde Desir said “The Spider Cup is an important senior tournament for our players; it brings out the best of all the players in the district. In the past we have encouraged the various clubs to have a youth team in the tournament. GMC and Northern United have had youth teams. In 2017 Northern United’s youth team made it to the final and went on to play GMC United; the latter went on to win the final for the first time in the GIFL.”

Desir welcomed new comers Valley Soccer, from the Castries Football Council and Flames FC, from the Marchand Football League to the tournament.

GIFL President Shayne Paul in his address said, “Two weeks ago the GIFL launched the Guardsman Under 14 tournament, two weeks later we are launching the senior aspect of it. The 2019 tournament will see three components, the senior tournament, the launch of the Under 11 division schedule for the first week of November and a one day female festival.”

“We must give recognition to the district representative, Lenard Montoute who has continued to pledge his commitment towards the development of football in the north of the island, and that I can assure you has augured well for our calender of activities as a league. The Spider Cup has strengthened the clubs and has assisted in crime fighting which today is one of the most important aspects making the headlines.”

“As President of the GIFL, I am satisfied; I can finish 2019 having accomplished every single goal that we had set in our calender of activities. This year the traffic has been tight in terms of bringing football to every age group and fulfilling the mandate of the Saint Lucia Football Association (SLFA) Inc.”

According to Paul, in 2018 the GIFL invited New Generations from the Babonneau Football League and Flow Lancers FC from the Castries Football Council; the two clubs mentioned are currently involved in domestic competition and are unable to participate in this year’s tournament.

He said, “As a result we have invited Valley Soccer Academy from Castries Football Council and Flames FC from Marchand Football League to compete; this shows that other leagues want to get involved in Gros Islet football.”

The GIFL President pledged his commitment to the Gros Islet senior football team and its technical staff currently participating in the SLFA Inc. Island Cup.

He said, “I am very proud of them; you know what we have gone through in the last four years. I simply hope we can take it right through and bring the Island Cup back to where it rightfully belong.”