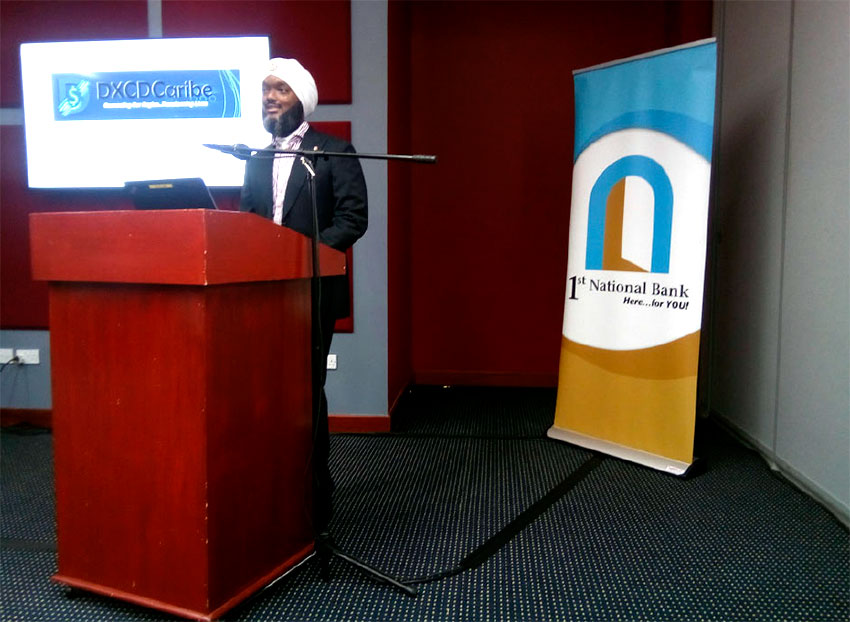 I gave-up my usually precious Saturday morning to attend the October 12, 2019 Stanley French Educational Lecture at the Financial Complex in Castries.

Presented by the 1st National Bank, the event was to introduce shareholders, customers, the press and other interested persons to new digital EC Dollar developed by the Eastern Caribbean Central Bank (ECCB) through its DXCD Caribe platform.

With online banking having taken-off here, businesses moving money faster than the speed of sound, coconut vendors checking-up their accounts on cell phones, customers paying utility bills online and almost everyone with an income using ATMs, the lines are still forever long at banks.

But online banking and paying bills through online agencies and apps is also growing at astonishing speed, as the Stone Age caveman in me learned with astonishing surprise last Saturday.

Banks in today’s paperless world are moving at breakneck speed to lessen use of cash and cheques, particularly by businesses. They’re charging now for once-free traditional paper-based services and encouraging customers still with account books to make the move to the cashless world through debit and credit cards.

Not that the banks want to do away with cash or cheques. But in the new world of digital currencies moving money by block chains, online-traders trading by smartphones from the beach or while stuck in traffic and global hi-tech digital corporations developing their own private currencies, the visionaries at the Eastern Caribbean Central Bank (ECCB) decided the region will not be left-out and came-up with a new innovative and revolutionary approach that’s allowed one of the world’s smallest central banks to join the exclusive global club of digital currencies – and at the very top.

While Bitcoin and other like crypto currencies are doing good business globally as people switch from leather in their pocket to smart wallets and purses, none has become sufficiently trustworthy, their volatility preventing them from having central bank backing.

As things stand now, anyone doing business with existing digital currencies does so at their own risk, as none will be reimbursed for losses. But not anymore. The new digital EC dollar is backed by the ECCB — and capital reserves the rest of the world can really bank on.

As things stand now, the ECCB has made history as the first and only bank in the entire world that backs a digital currency: the new online dollar, which will allow OECS nationals to trade and do other financial business online, is also available to the rest of the world.

Stephen Phillips, Vice President for Special Projects with BITT Inc., was the main presenter — and he took the mixed crowd of believers and disbelievers by the hand, not only navigating us all through the usually rough seas of understanding financial literacy today, but also noting and answering every one of the over 25 questions from a floor that also squarely reflected the widening digital generational gap here too.

Inquiring minds and mouths of my age were more interested in how safe their money would be out of their wallets and placed on a cloud, begging the presenter and other speakers from the floor to ‘speak English’ when talking digital.

But the digital startup generation cared not as much about those of us digitally challenged or mere victims of financial linguistic illiteracy, as about using the two-hour short Saturday morning window to find out more about how to use the new smart EC digital currency through their phones and associated devices.

I saw there, young people you’d never, ever believe are involved in what they’re doing: building platforms providing e-services, explaining how to use crypto-currencies, trading online, processing online bill payments, building new apps – even teaching financial literacy. (I also took the opportunity to get linked-in with them, for obvious follow-up reasons.)

But this new digital EC dollar is not the first and only major feat by the ECCB, which has maintained a world record for its stability vis-à-vis the US dollar, forever standing at EC $2.7169 to the US dollar and for a long time accepted without question at and by all commercial banks worldwide.

Another first by the ECCB, at least in the Caribbean, was the introduction of a brail EC dollar, specifically for use by the blind. The original idea was even upgraded to the new EC dollar, which is also accessible to blind persons, who can even check it at night by the touch, without light — something we with two eyes just cannot do.

The 1st National Bank, which introduced online banking here, is again setting the pace for yet another fundamental shift in how banking is done today. Its lecture series has always sought to bring shareholders and customers up-to-speed on global financial matters with implications for how we move money in the Caribbean: from De-risking to the Monetization of Marijuana — and now about the ease of moving money virally and virtually, through clouds by block-chain technology with smartphones and tablets, faster than the speed of sound or light.

Of course, the ECCB’s DXCD Caribe project will not be restricted to just one bank, which means 1st National Bank has opened the door for all others to walk-in and revolve through.

But more than that, it also means that anyone in Saint Lucia, the OECS or CARICOM – or the entire world, for that matter – can now use the only digital currency on this planet that’s backed by a central bank.

And all can bank on it!