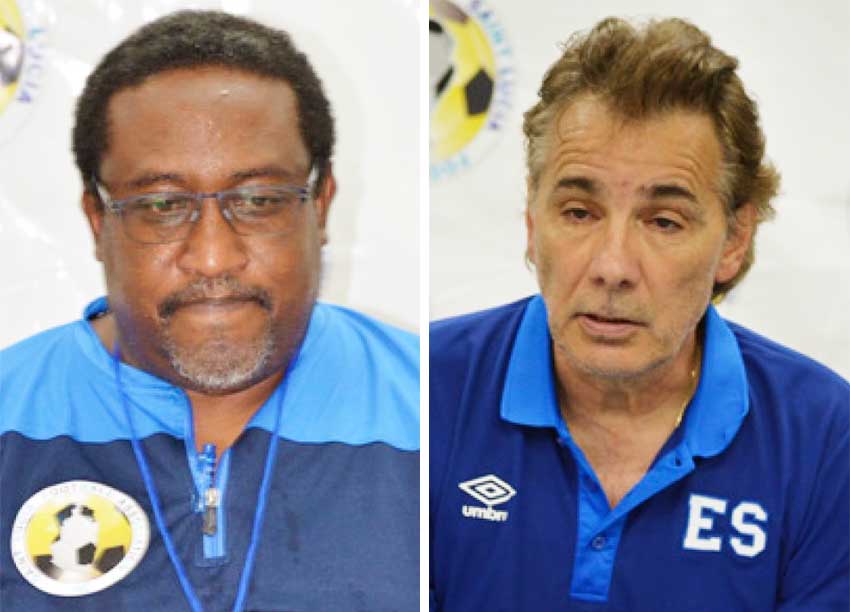 SAINT Lucia may have gone down 2 – 0 to El Salvador in the CONCACAF Nations League Group B, League B match played at the Daren Sammy Cricket Ground on Tuesday 15th October 2019, but in the aftermath fans and coaches acknowledged the efforts of the home team particularly for their class, even in defeat.

Carlos spoke highly of Saint Lucia’s goalkeeper, Vino Barclette, “He is very good, he is fast, strong and focuses on the game,” he noted.

First time on home turf in an international match and in Saint Lucia colours, Head Coach Jamaal Shabazz said, “This is a difficult moment. Normally I am very good with the media but today I feel very disappointed. I don’t think El Salvador was two goals better than us; they work hard, they were organized… we didn’t take our chances. We created three one on one clear cut chances and three other half chances, which in international football is a real chance. The goals we let in today were really soft and disappointing, but still the guys played with a big heart, they stuck to the plan, and we were organized. When you look at where El Salvador is ranked and where we are ranked and the way we manage the game there were still good things coming out of it.”

In terms of the defensive aspect since taking over the national team, Shabazz said, “I thought in the last 20 minutes we started to lose concentration. We lost some fitness; we started to get a little reckless, even after they scored the first goal. Otev Lawrence was having a great game, and then suddenly we started to throw caution to the wind. This is one of the learning curves for our players; you play an opponent like El Salvador, it’s not good enough to play 70 minutes well, it’s important you play it to the very end and even when we were down 1 – 0 we got a chance with Chaim Roserie but he just wasn’t able to put it away, but it’s something we can build upon.”

He continued, “We felt Aaron Richards would have been stronger and a runner in this game, we needed a sprinter going forward. We were justified in the selection, Richards a young player, got a one and one, he created three chances. He had a bumper game… I felt the starting eleven did well, they did justice, but I would have liked to see the ball at the back of the nets in one of those chances.”

In terms of capitalizing on the scoring opportunities and showing some urgency to score: Shabazz said, “In football, it’s a game of mistakes. It’s a game of capitalizing on the mistakes of others and the other team stuck to the task. You got the feeling that they felt at some point we would make a mistake. This is the challenge for Caribbean teams, including Saint Lucia; our players got to concentrate for longer periods, we got to play with more intensity. Intensity is not going to fall from the sky and we pick it up and put it in our back pocket. It’s going to be developed in the local league and by playing opponents like El Salvador.”

Shabazz had some encouraging words for Arron Richards going forward: “I thought in the first half he was a bit timid, I had not so easy words for him in the dressing room, he is a nice Christian boy, and I told him we’re not in church. I thought he gave a really good account of himself. This is a player who is going to cause a lot of problems for the opponent going forward.”

In closing the head coach stated, “It is difficult when you lose games like these but you don’t build a foundation with glass, you build a foundation with concrete and steel and that is our ability to bounce back. The people who came to support must go home feeling a pain, it is important we feel this pain together because this is how we become one. According to the African teacher, blows that don’t break the back strengthen it. This certainly will not break our back.”