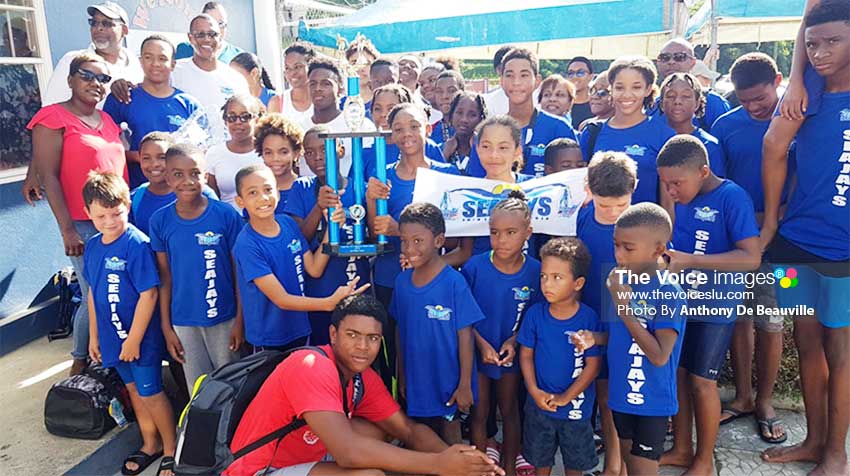 THE Seajays Swim Club did it again when they emerged champions of the 2019 National Short Course/ Organization of Eastern Caribbean States (OECS) Capri Sun Trials held at the Rodney Heights Aquatic Centre. Winning with a total of 1202 points, they were 157 points clear of the second place team Sharks.

Close to 175 swimmers representing seven clubs took part in the two day meet which was organised by the Seajays Swim Club in collaboration with the Saint Lucia Aquatic Federation and sanctioned by world governing body, FINA.

Among highlights of the meet were the two age group and one national record set by two of the island’s leading swimmers and a number of swimmers in the Under 6 age group showcasing their skills in the pool, some for the first time at the RHAC.

Jayhan Odlum – Smith competiting in the 15 -17 boys category broke his own record by setting a national/age group record in the 100 metres fly in a time of 57.03 seconds. The old record was 57.22 seconds set at the 20th edition of the RHAC Invitational Swim Meet held in Saint Lucia in August 2019.

Making a return to competitive swimming at the RHAC after eight years was former national swimmer Siona Huxley, not in her explosive style like previous years, but good enough to win the 18 and over individual award. She won the 50 metre free style in a time of 31.76 seconds, 200 metres Individual Medley (IM) in a time of 3 minutes 00.26 seconds, 400 metres free style in 5 minutes 43.40 seconds.

Robert Blanchard, President of Seajays Swim Club, said: “This Meet could not be possible without the sterling financial contribution of Capri-Sun. Capri-Sun demonstrates good corporate responsibility by the investment it has made and continues to make to ensure that young swimmers convert their daily hard work and commitment to their sport, into successes during competition. Seajays is grateful for this healthy collaboration and looks forward to celebrating 10 years with Capri-Sun in 2020”.

Blanchard took some time to thank the following sponsors – CIBC/FCIB, NLA, Earle Companies, Crystal Clear, JJ’s Paradise and Bel Jou for the investment they have made in the Club and towards the success of the 2019 edition of the swim championship.

He also thanked the many volunteers who contributed to ensure that the swimmers remained happy and focused on their events. The meet manager/ referee, the announcer, starters, timers, marshals, computer room managers, the medical team, the Red Cross, the DJ who kept the patrons well entertained, the fundraising committee, the clubs, the coaches, parents and guardians, and the management and staff of the RHAC for all they do on a daily basis to facilitate swimmers and the growth of swimming in Saint Lucia.