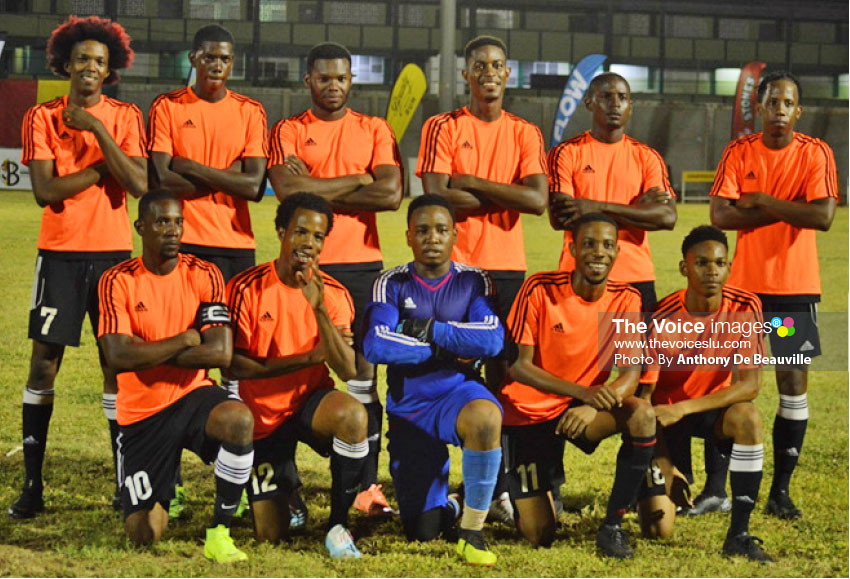 Vieux Fort South is about to find out what’s easier, winning a title or successfully defending it. The Southerners are once again in the Blackheart Productions/Saint Lucia Football Association (SLFA) Inc. Knockout Football Tournament finals, after defeating Marchand in Wednesday’s semi-final at the Phillip Marcellin Ground (PMG) in Vieux Fort.

Their opponent this time around is Micoud, who won their semi-final encounter against Mabouya Valley in the first game of Wednesday’s doubleheader.

The two teams advanced to the finals of the Blackheart/SLFA Knockout Football Tournament in contrasting styles. In the first semifinal, Mabouya Valley battled Micoud in a very tense encounter. With both teams trying to get a foothold on the game, it was Mabouya Valley’s No. 20 Nick Mondesir who broke the deadlock when the Micoud defender played the ball back to Noah Didier (goalkeeper) from midfield only to allow Mondesir to dash towards goal to score in the 65th minute.

Micoud never gave up and with their crowd support behind them kept piling on the pressure which paid off late in the second half. Andre Joseph wearing No.15 pulled one back in 90+2 minutes of injury time to send the game into 30 minutes of overtime. No. 9, Carlton Daniel made it 2-1 in the 90+21 minutes to seal the victory.

A total of 10 yellow cards were shown by referee JayhanPolius during the game.

In semifinal number two, defending champions Vieux Fort South (VFS) were up against Marchand, 2017 semifinalist. This matchup lived up to the hype as expected.

The defending champions came out firing from the first ‘phew’ from the referee and in the 5th minute of play Antonio Joseph wearing the No. 9 jersey put his team ahead to start the celebration in the stands. Eight minutes later No. 5 Noah Nicholas made it 2 – 0 and in spite of Marchand’s rebuilding process as they settled down pushing the ball around, the score line remained the same in favour of VFS at the halftime whistle.

On the resumption, Marchand was quick off the blocks when No. 9 JnNai Lesmond pulled one back in the 54th minute.  Following a few surges from both teams in an attempt to score at the final whistle the scoreline remained 2-1 in favour of VFS.

In a post-game interview CEO of Blackheart Productions, David “Shakes” Christopher said, “What a wonderful tournament this year. We are at the final stage, a spectacular double header; Micoud getting into another final and three-time champion Vieux Fort South getting past Marchand. Things are starting to shape up nicely for the finals; VFS versus Micoud and Marchand against Mabouya Valley for the third place, two noisy neighbours… it’s going to be a cracker on Saturday.”

The Blackheart CEO added, “It’s a revenge match. It was predicted by a number of fans from day 1 of the tournament that VFS and Micoud will play each other in the final; this is going to be a real cracker. They met in a previous final before and Micoud lost out to VFS. This current Micoud team is not the same which won a few years back; they’re in a rebuilding mode. VFS is not the dominant team like before, this evening they won convincingly, but regardless… may the best team win, I cannot call this one.”

In terms of the quality of play in this year tournament, Christopher said the tournament was dominated by a number of young players, aggressive on and off the ball.

“Personally if I was scouting I would easily have picked up at least 9 players that can make the national team,” he said. “Some of the teams were not at their best even though they came through the SLFA Island Cup. We saw teams like Canaries, Gros Islet, and Anse La Raye going out in the first round. Dennery was very impressive; they beat themselves out of contention. Mabouya Valley played very well to get to the semifinal after winning it in the last 10 years at the George Odlum Stadium. We had a few highs and lows but overall, it’s been exciting.”

In terms of the support he’d seen and the crowd numbers for this year’s event, the Blackheart CEO commented, “All in all I am very satisfied with the turn out and the support this year.”

The finals are now set for today (Saturday) at the PMG. Marchand comes up against Mabouya Valley for the third place silverware at 7.00 p.m. The grand final is at 9.00 p.m. with defending champion Vieux Fort South versus Micoud.