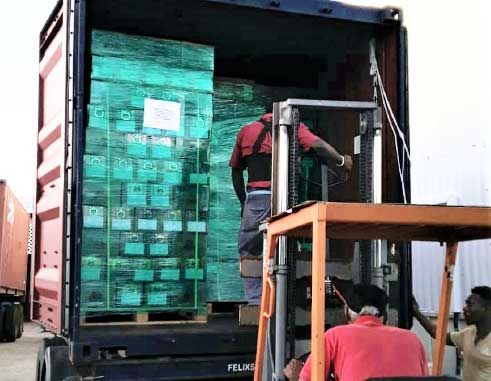 “Few companies have developed Caribbean brands that have carried the region beyond its boundaries and borders and Barons ranks as high as any that’s become immediately recognizable by name and label — due to top quality.”

I’VE always taken pride in reporting, highlighting and acknowledging efforts by local persons and companies, entities and anyone representing Saint Lucia and making our country proud both at home and abroad.

My focus today is on one I know well – one of Saint Lucia’s best manufacturing firms, with a very unusual business record that’s also simply amazing.

This local company’s record is spiced with accolades and awards, trophies and other accomplishments and has several times won top manufacturing awards here and elsewhere, simply on the basis of the superior quality of its products.

It’s the one company that’s consistently made Saint Lucia proud at home and abroad – and the only local company with not one, but two Saint Lucia flags on its product labels.

This is a company that’s broken into markets ranging from Cuba to Africa, the USA and South America, Europe and beyond. Now it’s entered the market in the largest country in the world.

If this was a quiz, I would’ve offered a prize to the first person to say which company that is. But this not being a competition but a statement of facts, the answer is: Baron Foods.

Baron Foods (St Lucia) Limited has won nearly every manufacturing and quality award it has been eligible for in the past quarter century.

Established exactly 28 years ago this month in November 1991, Barons made its name on the regional and international market as a consistent and reliable producer of top quality products, which has enabled the company to expand its range of products a hundredfold from mainly pepper sauces to 150 branded products, from Hot-Sauces, Condiments and Marinades to Salad Dressings, Specialty and Gourmet Sauces.

Barons has flown the Saint Lucia flag and boosted the wider Caribbean through its quality products and reputation for reliability in North, South and Central America, Africa and Europe.

Two years ago it entered the Cuban market, where its products are available on shelves across the Caribbean’s biggest island of 11 million people.

Baron Foods announced their entry into Russia last weekend as part of its ongoing “quest of maintaining its vision in creating a Caribbean brand that is world-renowned.”

Of course, Russia is no little market. With its territory occupying one-ninth of the world’s land surface, it extends over 11 time zones covering the whole of northern Asia and Part of Europe.

With a population of 142 million, 10 million reside in the capital Moscow, the main distribution hub for Baron’s products destined for regions across Russia.

To date, the company says, it has “safely secured a healthy business relationship with a Russian Company that’s shown great interest and supported the Baron Brand in the Russian market.”

Based on responses from the Russian market, two full container loads of Baron Foods products already ordered have been exported. The first shipment left the island last month and the second will leave in the coming weeks.

Deserving congratulations have been pouring in to Baron Foods and its pioneering Founder and CEO Ronald Ramjattan, who has successfully piloted the company through all waters and weathers, from its humble origins to its current pride of place at the very top of the quality rankings in Saint Lucia, the Caribbean – and now with the world not just in mind, but in clear sight.

Few companies have developed Caribbean brands that have carried the region beyond its boundaries and borders and Barons ranks as high as any that’s become immediately recognizable by name and label — due to top quality.

I’ve seen the response in China to Baron’s products (that I never go there without) and have always maintained that given the overall Chinese love and appreciation for good quality spices, the local Caribbean company and its brand have what it takes to enter the Chinese market.

Now that Baron Foods are available in Russia, who’s to say anywhere in this world is impenetrable for its world-renowned, top-ranking quality, Saint Lucian-and-Caribbean-branded product?

Not anywhere I know of — including outer space, where even astronauts always strive for better taste!