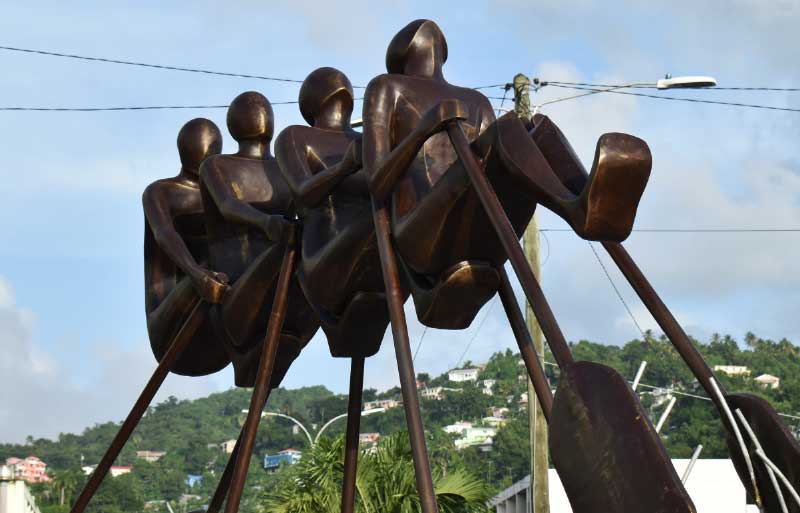 ON Thursday, October 3, 2019, the government unveiled a monument on the Castries waterfront roundabout, as part of the country’s 40th Independence Anniversary commemoration. The ‘all-in” monument is intended to depict the collective spirit of all Saint Lucians working together, as one people, in pursuit of our national development aspirations. The monument instructs us that no one, irrespective of class, race, creed, gender or religion will be left behind. Every Saint Lucian should aspire to reach his/her full potential, with the expectation of unwavering state support along the journey to self-actualization.

Indeed, the ideal of inclusiveness with state support is commendable. But the actions of this government, over the past 31/2 years, points to a completely different set of values. While the Allen Chastanet administration is giving lip service to this “all-in” concept, it is simultaneously engaged in the most relentless campaign of divisiveness, tribalism and victimization in the history of our country. The prime minister and his chosen cabal must understand that actions speak louder than words and the people are feeling the negative effects of his draconian actions on a daily basis. No amount of smooth talking and tax payers financed propaganda can take away their pains and mistrust of his words.

Let’s take a journey down memory lane since June, 2016. If the administration’s true intention was for all Saint Lucians to be ‘all-in”, then what about the NICE workers who were dismissed on account of their perceived political affiliation, as stated by a minister of government. Are they “all-in”?

What about the large amount of poor folk(s) with plywood homes, whose only limited insurance coverage, the distress fund, was discontinued. Are they “all-in”?

What about the many sick and poor, who depend on good quality, life-saving health services at a new St Jude hospital, which was abandoned to facilitate the equine disease free zone for a horserace track. Are they “all-in”?

What about the young footballers and cricketers all over the country, whose community playing fields maintenance programme was stopped and are unable to play their beloved sport, as the field grass cover is knee height. Are they “all-in’?

What about the STEP worker(s), whose much needed financial relief came from their short term employment jobs which was cut off by the government. Are they “all-in”?

What about the Saint Lucia National Trust whose annual subvention was cut off with such devastating effects on the execution of important programmes, such as, the Walcott House Project. Are they “all-in”?

What about those below the poverty line, the indigent persons among us, who depend on the monthly government stipend for mere survival, but a heartless government reduced it from $300.00 to $200.00 monthly. Are they “all-in”?

What about our nurses whose working conditions and environment have deteriorated to the point where they have left the health sector in droves, to secure a future with job security in a proper working environment. Are they “all-in’?

What about the farmers who were promised better prices and expanded markets, that have not and will not be realized, causing them to expand at tremendous financial losses. Are they “all-in’?

What about the Radio St Lucia workers who were unceremoniously dismissed when our national radio station was shut down, and the workers at the St Lucia Fish Marketing Corporation who were sent home to join the unemployed. What about the fishers who now pay the fuel tax, although they don’t use the government’s road while fishing, but now have no guaranteed outlet for their fish catches. Are they “all-in”?

I can go on and on pointing to other sectors, but I’m sure that you get my point. If all the sectors mentioned above, along with others, have not been part of the “all-in” gimmick, then one may ask; who is really “all-in” with this government?

Fellow Saint Lucians, there is sufficient information in the public domain for us to conclude that some persons and companies closely associated with the ruling cabal have received non- bidding, direct contracts in the tune of hundreds of millions of dollars. We can further conclude that those associates of government ministers, now infamously referred as friends, family and foreigners (FFF), are the group who can proudly proclaim the benefits of this “all-in” scheme. It has definitely worked for them.

The rest of the population have been left out as by-standers and can best be described as the “most-out” group. The best way to test my proposition is to ask yourself; in which group do you fall?

Are you “all-in” or “most-out”? Rest assured, we the people, will decide at the appropriate time.