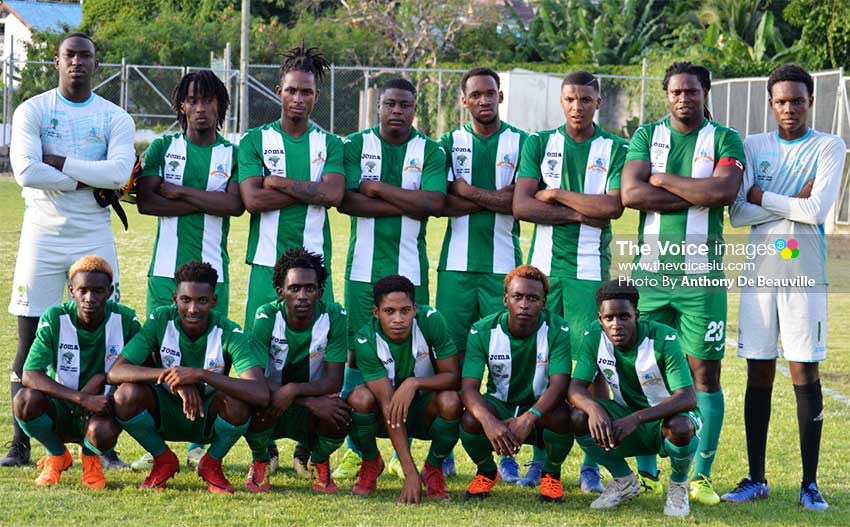 IT’S all to play for when football action resumes in the Saint Lucia Football Association (SLFA) Inc. and National Lotteries Authority sponsored Island Cup on Wednesday 11th September 2019. In terms of the qualifiers, one place is definitely up for grabs in Group 1. This will hinge on the final match between Vieux Fort South and Laborie at the Marchand Grounds from 6.00 pm.

The last time the two teams met was in the Blackheart final in 2018 at the Philip Marcellin Grounds. In that encounter, Vieux Fort South defeated Laborie 4-1.

To date, Canaries and Roseau have already qualified in Group 1 for the quarter final round of the tournament; while Gros Islet has a better goal difference to Desruisseaux.

However, following their final preliminary round match which was played at the Marchand Grounds on Wednesday 4th September 2019, Roseau Valley and Mabouya Valley played to a 1 – 1 draw.

Macalan John put Roseau Valley into the lead in the 8th minute of play and despite the attacking and counter attacking display on the pitch by both teams no further goals were scored as the half ended 1 – 0.

At the resumption both teams tried to wrestle the initiative but despite the creation of numerous scoring opportunities neither team was able to capitalize it.

Midway through the second half Mon Repos was reduced to ten men through injury sustained by one of its players and this seemed to spur them on as they soon got the equalizer from Brandon Stephen in the 67th minute.

Both teams fought gallantly for the go ahead goal which never materialized and in the end they both had to settle for a share of the points as the match ended 1 – 1.

The evening’s second game featured Desruisseaux and Vieux Fort South in a must win situation for both teams. Vieux Fort South was without their regular goal keeper at the commencement of the game and took to the field with ten players, with one of the on-field players substituting between the uprights.

Desruisseaux tried to capitalize on this advantage, but failed in their efforts.

Soon the Vieux Fort South team was joined by their regular goal keeper which provided a much needed boost as Antonius Myers shot them into the lead in the 12th minute of play.

From hence forth it was a ding dong battle between both teams as they sought the ascendancy, but alas neither made use of their opportunities as the half ended 1 – 0.

Following the resumption the pattern of play continued in the same vein which resulted in Desruisseaux getting the equalizer in the 68th minute via the boots of Chad Flavius.

No further goals were scored as the game ended 1 – 1.

Following the conclusion of Wednesday evening’s matches, the points standings in Group 1 are as follows:

This means that Canaries, Roseau Valley, Gros Islet and Desruisseaux have now qualified from Group 1 for the Blackheart Big 8 competition which kicks off today at the Phillip Marcellin Grounds (PMG) in Vieux Fort.