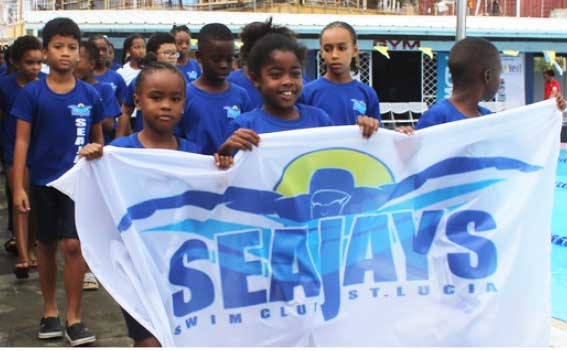 CLOSE to 190 of Saint Lucia’s top competitive swimmers will be in winning mode, when the Seajays Swim Club in collaboration with the Saint Lucia Aquatic Federation stage the most talked about event on their calendar. The Capri Sun Short Course National Championships now into its 19th edition is scheduled for October 12-13, 2019 at the Rodney Heights Aquatic Centre (RHAC).

The opening ceremony is slated for Saturday, October 12th, from 9.00 a.m. with a march past of teams, the playing of the national anthem, prayers and addresses by Saint Lucia Aquatic Federation (SLAF) President – Eddie Hazell, a representative from the Department of Youth Development and Sports, Sea Jays President – Robert Blanchard, a representative from Massy Distributors (Capri Sun), and the reading of the athlete and officials oaths.

Like previous editions, the Sea Jays-hosted meet is expected to generate fierce competition with the stands filled by swimmers, coaches and family members in a cacophony of cheering, shouting and whistle blowing over the two days of competition.

Swimmers will be competing in all age groups from 8 and under to the 18 and over.

The championship will run in accordance with FINA rules and will be under the watchful eyes of Meet Director, Francisca Plummer.

For the many fans coming to the RHAC to take in the showpiece they will see the following swimmers in the thick of things representing their respective clubs: Jasmine Steide, Allysia Alfred, Ziv Reynolds, Allandre Cross, Zaina Brathwaite, Maya Brathwaite, Anya Hilaire (Sharks).

Meanwhile, immediately after the championship, the SLAF Technical Committee headed by David Peterkin will meet to select a 34 member team to represent Saint Lucia at the 29th edition of the Organization of Eastern Caribbean States (OECS) Swim championship slated for Saint Vincent and the Grenadines.