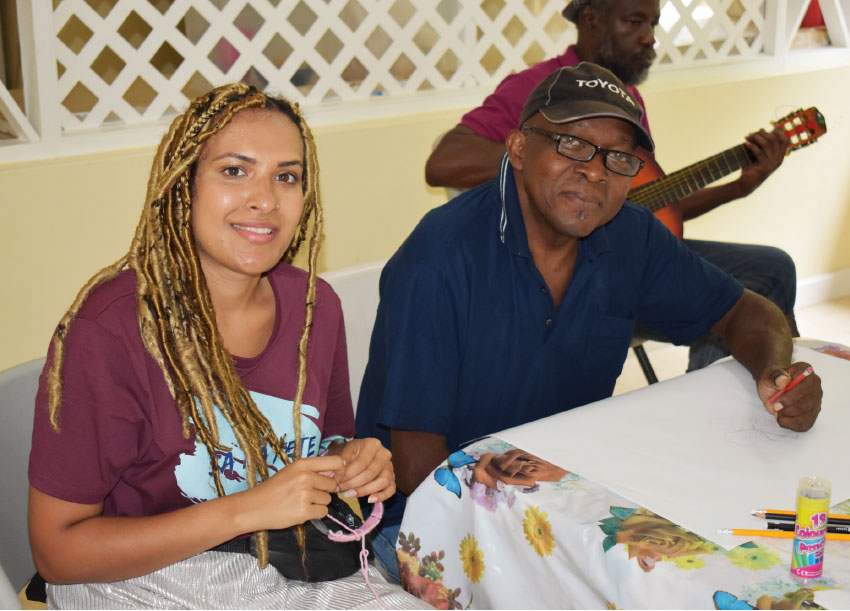 BRITISH national, Taslima Khan, founder of TASLIMA K, has partnered with the Saint Lucian-based Caribbean Elective to create an arts-therapy initiative called ‘SA KA FETE’. The goal of this initiative is to encourage dialogue on mental health issues through the use of art in the various communities. TASLIMA K, which is a fashion label that was founded in 2013, has been using art to educate people about mental health and other social issues.

Caribbean Elective, whose objective is to find work placements in the Caribbean for foreign students, has welcomed a group of psychology students from Birmingham University to partake in the community service of SA KA FETE. On Monday September 16th, some of the students, along with UK psychotherapist, Liz Sharpe paid a visit to students at the Sir Ira Simmons Secondary School to spread awareness on mental health issues.

On Tuesday September 17th, the group paid their second visit to the residents of Cornerstone Humanitarian Society. Most of the residents at Cornerstone, many of whom have been abandoned by relatives, suffer with various mental health issues. The SA KA FETE group engaged the residents in conversation over art-creation and craft-making. The group included Harry Spear, Co-Founder of Caribbean Elective, Taslima Khan; Liz Sharpe; Charlotte Mathurin, Caribbean Elective Volunteer Coordinator; Debby Brown-Joseph, visiting nurse; and Shakerah Brown and Sarah Russell, psychology students from Birmingham University.

During their visit, the group used art therapy in their interaction with the residents. Some of the residents were drawing, painting and crafting while another was playing the guitar as he sang along with the psychology students. Desmond Philip, psychologist and Administrator of Cornerstone Humanitarian Society, extended a warm welcome to the SA KA FETE group. In regards to the residents of Cornerstone, he remarked, “You have to feel for them; you have to put yourself in their shoes for they are human beings with feelings just like you and me. –But some of their relatives never come to visit which is the tragedy of the whole thing.” Cornerstone has a capacity for forty residents but currently has thirty. This includes twenty males and ten females.

Taslima, who is also an artist, has expressed a passion for helping mentally-disturbed people. She said that art-therapy is an effective tool for rehabilitating the mentally ill. She emphasised that mental health was an issue which needed to be spoken of a lot more so people could understand what it is and how it affects society. She stated, “Mental health is within your mind; and everyone has a mind which means that mental health issues can come to anyone, at any point and at any time.” She explained that SA KA FETE, Creole for “how are you?” represented sincere inquiry into how others were feeling. “We all have a good day and a bad day,” she said, “It’s just understanding how to take care of yourself when you have a bad day and not allow it to turn into something bigger which can then affect you for the rest of your life. People need to understand how to help everyone else around them as well and be aware of when someone is not in a good mood, and how they can help each other.”

During an interview with Harry Spear, he stated, “Many of the residents here struggle with their mental health and they’ve had long term mental health difficulties. By doing art-therapy with them you are allowing them an opportunity to release their frustrations for the very first time. So, the art that they’re producing is very powerful in many ways.” He said that the visit has not only given the residents an opportunity to come together and do art, but to sit next to someone who is willing to listen. He concluded, “One thing I’ve noticed is that some of the people here have faced extraordinary suffering in their lives, but the positivity they still display every day is truly inspiring.”