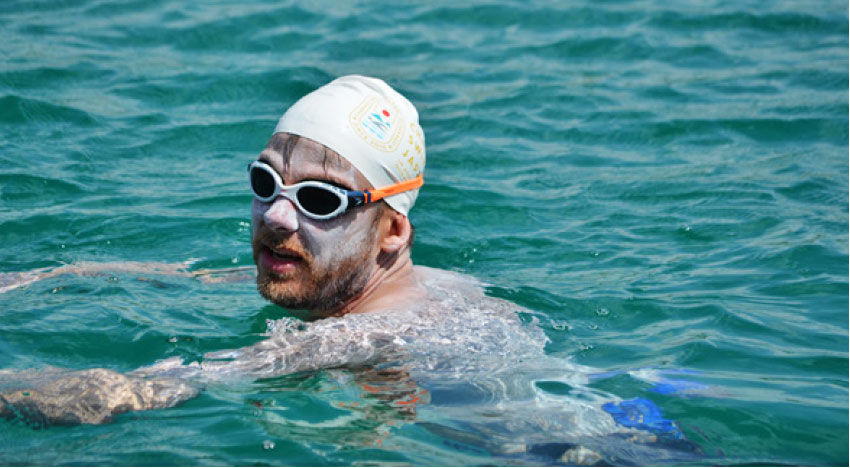 His unprecedented swim began on Friday 13th September 2019 at 8.20 a.m. This may have been an ordinary start for open water swimming, but this was not planned as an ordinary swim.

With a comparable distance and never having been attempted, this Plan B started to quickly become Plan A for Bellamy and his support crew. He had a team from Swim Barbados, headed by Kristina Evelyn, behind him and received extra assistance from the Saint Lucia Channel Swim organizers. Together the swim came to fruition.

The original start date for the swim was Sunday 15th September but with a weather system to affect the region, the date was moved earlier to Friday 13th. Expecting the swim could take between 55 to 65 hours, Bellamy anxiously trained for weeks in Barbados, completing three 24 hours swims.

As the morning quickly approached, and Bellamy started his historic swim, a buzz of excitement filled the air. The international open water community, as well as the region, were all amazed at the attempt. With Mother Nature doing her part, the swim went on with calm seas and waters throughout the day and full moon light at night. Bellamy entered Saint Lucian waters overnight and at dawn on Sunday 15th September saw the coast of Saint Lucia about 30 miles out. The sight of land for the first time in 35-40 hours not only made the crew smile but gave Bellamy the push he needed to get to the coast.

As the day progressed, with a swift current, the expected “touch” time went from 8.00 p.m. to 6.00 p.m. to somewhere from 4.00 p.m. to 5.00 p.m. The current was pulling so strong that the intended landing spot of Sandy Beach had to be moved. Although there was a growing crowd at Sandy Beach, there was no physical way for Cameron to walk onto the beach with the strong current from the southeast. Instead, at 4.43 p.m. after 56 hours and 26 minutes (unofficial) of swimming, Cameron touched a rock at Moule-a-Chique in Vieux Fort, Saint Lucia.

Close to 200 well-wishers came to welcome Cameron to the shores of Saint Lucia. Though the swimmer was not a Saint Lucian himself, Saint Lucians wanted to be part of the historic moment as some stood on the jetties and docks as the Marine Police vessel escorted in the catamaran Cameron was on.

His mother Janita Bellamy briefly spoke to the VOICE about Cameron’s latest open water swimming accomplishment, she said, “I just can’t believe it; I can’t believe he is able to do these things. That’s extraordinary.”

With a smile on her face, she said, “Even his mother can’t understand. This is the longest he has ever done. He’s been training really hard and once he gets something in his mind, he will go all out and do it, he has done it and he never let up.”

The one disappointment was that most if not all the well-wishers who turned up to get a glimpse of Cameron were left wanting as they never saw him; he was taken via the Marine Police Unit to a hospital in the north of the island as a precautionary measure.