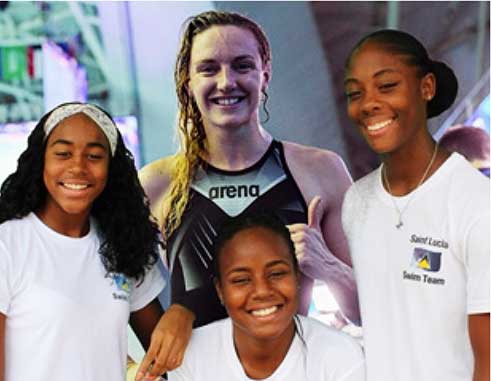 RECENTLY, the best junior swimmers, aged 14-18 years from around the world gathered at the FINA World Junior Swimming Championships in Budapest, Hungary. The primary objective was to showcase their best in the competitive arena, which was in the form of a 50 metre state of the art swimming pool.

In Budapest, the team was under the watchful eyes of National Swimming Coach, Yasmin Tyson.

According to Tyson, the swimmers had never before experienced that international level of swimming competition among their age groups. The age range for the girls were 14 – 17 years and boys 15 – 18 years. Despite being anxious at times, like true champions they persevered and attained four Personal Best times and one National Record.

Her reaction time also improved as the meet progressed moving from 0.74 to 0.70 in her final race.

Mikaili Charlemagne in her second FINA World Junior Swimming Championships was determined to rise to the occasion. With disqualifications (DQs), coming in fast and furious, Mikaili was able to focus and clocked 27.27 seconds in the 50 metre freestyle to record a Personal Best, improve on her reaction time and set a National Record in the process.

These Championships will forever be etched in the memory of all the swimmers. Coach Tyson advised the team that their journey was only just beginning.

“They need to embrace the challenges and recognise that their training regiment, diet, mental preparation as well as dryland training has to improve in order to rise among the champions,” Tyson said. “Most of all they need to stay healthy as the 2020 and 2024 Olympic Games are not too far away.”

Team Saint Lucia had the honour of meeting Olympic Gold Medallist and World Champion KatinkaHoussu who encouraged them to continue training hard and push themselves beyond the challenges. The three young ladies described the Championships as an amazing experience in which they had the honour and privilege to represent their country.