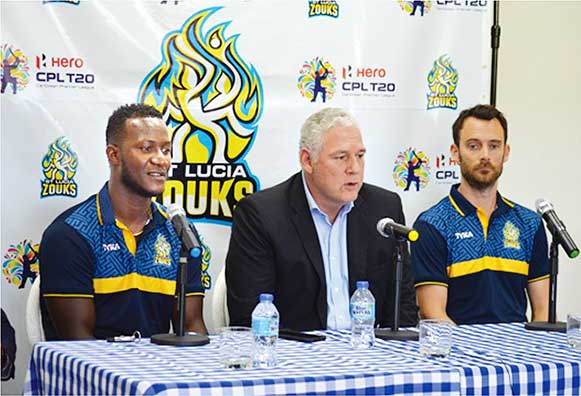 THE Saint Lucia Zouks will launch their Hero Caribbean Premier League (CPL) T20 campaign versus Guyana Amazon Warriors at Providence Stadium, Guyana from 6.00 p.m. this evening, and team captain Daren Sammy and team coach, James Foster believe a win against the four time losing finalist (2013, 2014, 2016, 2018) will set the tone for a very strong campaign in 2019.

Speaking on Tuesday 3rd September at a Zouks press conference before the team departed for Guyana, captain Daren Sammy said, “The buzz around the island with the Saint Lucia Zouks being back is something I am very excited about; being part of this franchise from its inception I believe we are back to our rightful name.”

In terms of the squad, Sammy said, “We have a lot of effective players. We don’t have the superstars, but the coach and I, we are very happy with what we have. We have players for every position and we can’t wait to start our campaign on Thursday versus the Guyana Amazon Warriors in Guyana, and when we come back to Saint Lucia to entertain the home crowd.”

The two time ICC World T20 Champion said, “When I go on the field of play my goal is to win cricket games. I think I have the man power to go out there and finish up the job. I am looking forward to an exciting season where the first objective is to qualify for the playoffs; we only managed to do that the last time we were branded Saint Lucia Zouks. We are looking to get there this time around and eventually win this year’s tournament.”

According to Coach James Foster, “We got a very happy team. It is also important to identify the work that has gone on for the last couple of weeks with our manager, Michael Hall. Everyone is delighted; the players who have not played for the Saint Lucian franchise before are very excited about joining us, and they really want us to do well.”

As coach, I am here to support Daren. I have worked with him before, he is an exceptional leader and for me it’s about facilitating and trying to get the best out of our players. We have invested in the individuals and we are working very hard to achieve that. In terms of the name ‘Zouks’, it’s all about the dancing and the flavour, and that is what this team is all about this season.”

Tourism Minister Dominic Fedee who was also in attendance said, “The Government of Saint Lucia is extremely delighted to be part of this game and cricket is one of those passions of the island.”

He added, “We have been supporting this initiative for the last three years. The total sum is over US$1Million… and that is a testimony to our own commitment to the Zouks. I think it was Daren who called me three years ago and said the Zouks were in jeopardy. He asked if we could do something. Quickly we got around and spoke to the relevant ministers including the Minister for Sports, Edmund Estaphane and the Prime Minister who is the Minister for Finance, and we all concluded with one thing.”

Fedee made a special plea to all to get behind the Zouks in this venture: “I want to call on Saint Lucians to give their overwhelming support to the team; come out in large numbers and give them your very best.”

Fedee strayed from CPL/ Zouks talk for a few minutes as he took time out to say, “This sponsorship is really in keeping with a broad philosophy of the government. One of the backbones/foundations of development of any country is to have a very strong sporting culture, and a very strong sporting athlete. In order to do so you need a strategy.”

He said the government has been unveiling a comprehensive sports development programme to advance infrastructure island-wide. “If you go around the island, you will see a lot of work that is taking place to improve our playing fields. Some of them are going to be astro turf, and there is a big transformation taking place all over Saint Lucia.”

According to the minister, chief among these changes is the transformation of the Gros Islet Secondary School into a Sports Academy.

“This will allow young sporting athletes to pursue their education while at the same time having a very structured training programme; the Sports Academy will be the specialized sports school.”

Prime Minister Allen Chastanet, who arrived late unfortunately, first mentioned to the local media that the situation in the Bahamas was “not good” following the passage of Hurricane Dorian (Category 5) which left a trail of destruction in its wake.

Switching gears and focusing on the Zouks, Chastanet said, “The re-energization of the Zouks is a welcome change for us and it’s an honour for Saint Lucia to host one of the CPL teams. As a government and like any other, we have done anything possible to be able to support the franchise here in Saint Lucia. The franchise went in a different direction in the last two years. We were uncomfortable with some of the directions that franchise was going in and when the opportunity came for the government of Saint Lucia to support this new initiative we did not hesitate and certainly it is really great to see Daren’s enthusiasm for this team. I believe it will become very infectious for the rest of Saint Lucia. I certainly did not want to miss this opportunity despite of what was going on today (Bahamas) to reiterate that my government is 1000% behind the Zouks franchise and 2000% behind Daren. We are hoping all Saint Lucians will come out and support this team.”

The Prime Minister added, “There is a new energy, a commitment and a drive to win. Saint Lucia is on a very good wicket… when we see the success of our Windward Islands school team, the success of the national Under 15 boys football team, the Under 14 and Under 20 Women’s teams in football, Levern Spencer winning gold, Albert Reynolds winning bonze at the Pan Am Games in Peru, and earlier this week the Under 20 Girls / Boys emerging champions of the Eastern Caribbean Volleyball Championship (ECVA) Volleyball Championships in Antigua.”

He continued, “Saint Lucia is on a path of champions. We are starting to realise our talents, and we are very lucky to have Daren captaining the Zouks. I am looking forward to your support, and be assured of my government’s full support in making this happen.”